On the 29th November 2008 at the Deutsche Guggenheim, Berlin, Memory (2008), by the internationally renowned artist Anish Kapoor, was unveiled to the public. A “memory” of what? Of whom? An artwork given such a title implies that it should have an ingrained historical context tied with Gainsborough-esque qualities of Middle England grandeur. With previous […]

Kapoor invites us to experience Memory in fragments

On the 29th November 2008 at the Deutsche Guggenheim, Berlin, Memory (2008), by the internationally renowned artist Anish Kapoor, was unveiled to the public.

A “memory” of what? Of whom? An artwork given such a title implies that it should have an ingrained historical context tied with Gainsborough-esque qualities of Middle England grandeur. With previous knowledge of Kapoor’s personal history and work, such as his gargantuan use of scale, volume, and colour investigating materiality, non-materiality and the phenomenology of space, it is obvious that neither of these notions were applicable to this artwork. So what is Memory and what “memory” was left from viewing it in Berlin?

Since 1997, the Solomon R. Guggenheim Foundation and Deutsche Bank have partnered, commissioning established and young artists of varying nationalities to create new work, acting as a catalyst for artistic practice. Memory is the fourteenth commission in this series, further expanding the parameters of contemporary art, whilst representing a milestone in Kapoor’s own career.

Made from Cor-Ten steel, a material never used by Kapoor before, Memory has an industrial exterior, showing the usually concealed bolts and hinges, with a deep orange rust-like colouration. It envelops and challenges the architectural space of the gallery. Touching the floor, walls, and ceiling, it is an oblate spheroid or egg-shaped form that has to be viewed in three stages – twice from the exterior within the gallery’s white-walled space and once looking into the dark cavernous interior through a two-metre square aperture. It can never be experienced or negotiated all at once as you are confined to specific viewing areas. 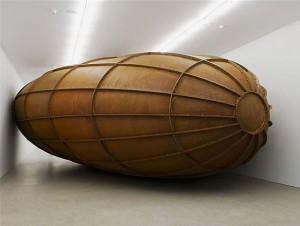 Kapoor invites us to experience Memory in fragments, to be reconstructed in our own memory, therefore existing in full only in our mind. Exerting more effort in the act of seeing, you feel like a child, slowly regressing, with a growing want to crawl between spaces and climb into voids to discover more. It becomes a frustrating puzzle, where the fragments of the viewed sculpture start to become confused with each other, forcing you to consider the fragments of your own psyche. As you stare into the vast void at the third viewing point, you are immediately forced to become self-reflective, questioning your own history.

In a recent interview Kapoor states,

“I have preoccupation with architecture. A building isn’t just bricks and mortar or an interior and exterior. It is a physical projection of our bodily being. I see this as a ‘mental sculpture’ where the meaning is accumulative.”

When it travels to different international locations including the Solomon R. Guggenheim Museum, New York and a location in Mumbai, India, it will be interesting to see the many dialogues it will create and new meanings Memory will take on. Kapoor has truly captured the pure art of perceptual experience in this self-reflective puzzle.

Memory by Anish Kapoor is on display at the Deutsche Guggenheim, Berlin, from the 30 November 2008 – 1 February 2009.

Photos by Mathias Schormann of ‘Memory’ by Anish Kapoor as installed at the Guggenheim Foundation for Deutsche Guggenheim, Berlin. Click on the image for larger view.

Rachel Marsden is an artist, freelance curator, arts journalist and writer with a specialist interest in contemporary Asian art specifically from India and China. She also writes for a-n Magazine and What's On UK. She lives and works in the West Midlands.
Shades of Brown
COUNTRY Paintings by Gerry Judah