Anish Kapoor the Indian born British installation artist is showcased at the Royal Academy with a unique waxwork called Svyambh featured at the the exhibition.

Anish's work has been described as "executive toys"

The Royal Academy is exhibiting a retrospective show of sculptor Anish Kapoor, Indian born British installation artist. He is the winner of the Turner Prize and creator of the most beautiful pieces of monumental modern art in recent years. Anish Kapoor has been described as “the darling of the contemporary art market.”

The Royal Academy exhibition in London, UK, runs from 26 September to 11 December 2009 and is unusual in that it showcases the artist while he’s still alive whereas most of the artists they exhibit are Old Masters who have passed away. 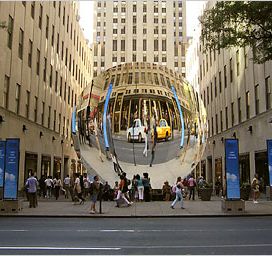 The main pieces exhibiting are Svayambh and Shooting in the Corner. Svyambh (Sanskrit for self generated) is a l40 tonne mass of red wax travelling on rails across the gallery leaving a trail of pattern behind it. Shooting in the Corner is an enormous cannon that shoots 9 kg of wax pellet, every few minutes, through an archway onto a wall where it leaves a red smear like vermillion.

The show contains examples of Anish Kapoor’s other work. One room features brightly pigmented sculptures. Large ‘Hive’ pallets of clay cover the floor in a second room, describing the organic forms seen in nature. Another features mirror and steel works.

Anish’s work has been described as “executive toys.” Some of his installations could be seen as fun and exciting corporate toys or sculpture designed for moderniste penthouse apartments. These include a large white cylinder of polymer gently indented with a sphere. Several pieces contain convexities curved and indented into smooth surfaces. These sculptures play on hallucinatory sensory distortions. 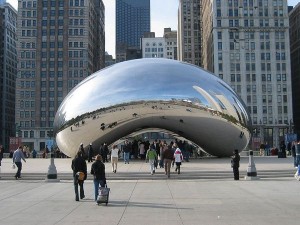 His most famous work is Cloud Gate situated in the Millennium Park, Chicago. It is a vast globe of shiny steel dominating the area. What is clever about Cloud Gate is that the equator of the globe reflects the horizon perfectly creating a symmetry of reflection. His works are almost cinematic and panoramic in interpretation. Another well known work is Sky Mirror in the Rockefeller Centre – a polished piece of steel reflecting the world around it.

Anish Kapoor was born in Mumbai and moved to London in the 70s. He studied at the Hornsey College of Art and later at Chelsea School of Art and Design. He has exhibited at the Tate Gallery, Kunsthalle Basel, Deutsche Guggenheim in Berlin, MAK Vienna and ICA Boston. In 1991 he won the Turner Prize and became a member of the Royal Academy. His work is represented by Lisson Gallery, London and Gladstone Gallery, New York.

Anish Kapoor has several commissioned pieces exhibited in locations around Britain. He has installed Sky Mirror at Brighton Pavilion and Nottingham; C-Curve at The Chatri; Blood Relations and 1000 Names at Fabrica. C-Curve attracted so much attention that traffic had to be redirected from the site. Marsyas (2002) is permanently installed in Tate Modern’s Turbine Hall. Taratantara (1999) is a 35 metre sculpture at the Baltic Flour Mills in Gateshead. Parabolic Water, coloured water rotating within an installation, was shown at the Millenium Dome. The sculptor has been commissioned to create 5 pieces for Tees Valley Regeneration. The Tees Valley Giants are the world’s five largest sculptures.

Anish Kapoor has produced some of the most inspirational works in modern art. His installations are worth seeing. The Royal Exhibition is a rare opportunity to see examples of his work under one roof.

S Basu wants to explore the place of Indian diaspora in a globalised world in her journalism. She likes being a part of contemporary British Asian culture and celebrates the recent flourishing of interest in it. She has a passion for Bollywood, Art and all things Indian.