With the London Olympics around the corner, there’s a rather stimulating buzz in the air. With tourists flying in from all around the world, London is set to be exposed to a whole new level! And who better to set an impression than one of Anish Kapoor’s mind-blowing masterpieces.

If you think you’ve seen the best of Anish Kapoor’s work, then think again. He’s back, with another astonishing innovative structure that will take your breath away. Yes, it’s the ArcelorMittal Orbit. Featured at the Olympic park in east London, it measures at an overwhelming 115 metres (377 ft.) making it the tallest structure in the UK to date. The helter skelter looking observation is taller than the Statue of liberty and twice the size of Nelson’s column

Cecil Balmond, a Sri-Lankan born British architect, supported Turner prize winner Anish Kapoor during the project. They both wanted to create something spectacular for the Olympic Park in Stratford and they sure did. The red lattice swirl took 18 months to construct, and cost around a staggering £22.7 million. 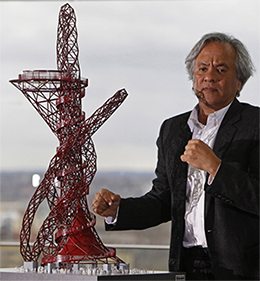 The original name for the tower was ‘Arcelor Orbit’ however the challenging project was helped with the financial backing of one of Britain’s richest men, steel industrialist Lakshmi Mittal, he donated £16 million. So therefore the name changed to ‘ArcelorMittal Orbit’.

Anish Kapoor’s work was first recognised in the early 1980s, from that point forward he has never failed to impress us. He began his career using simplistic material such as granite, marble, plaster etc. He formed geometric and biomorphic sculptures and kept them at a minimalistic level. The British artist is known for his creations like the Cloud gate (2004), Halo (2006) and Svayambh (2007) to name a few.

In the early days of sculpting he stated: “While making the pigment pieces, it occurred to me that they all form themselves out of each other. So I decided to give them a generic title, A thousand names implying infinity, a thousand being a symbolic number.”

The exhilarating tower is situated between the Olympic stadium and the Aquatic centre, allowing visitors to enjoy the whole of the Olympic Park and beyond, across London’s skyline for up to 20 miles. The bold and daring structure has collected both negative and positive responses from the public.

Jonathan Glancey of The Guardian described the tower as a: “Fusion between striking art and daring engineering.”

On the other hand, Richard Morrison of The Times shared a completely different view of the orbit, describing it: “Like an enormous wire-mesh fence that has got hopelessly snagged round the bell of a giant French horn.”

Kapoor isn’t one to be afraid of critical reviews, in fact he said:

“There will be those who hate it and those who love it – that’s okay.The Eiffel Tower was hated by everybody for 50 years or something like that. Now it’s a mainstay of how we understand Paris. We’ll see what happens here.” 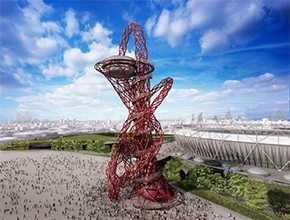 One of the key criticisms being received is the self- importance of the structure itself. As much as Kapoor and Balmond have insisted on this being a permanent eternal legacy, the big question remains of what the uses of this 377 ft. twisted tower will be.

There have been speculations stating that there are plans for the Olympic Park to turn into a permanent tourist attraction in Easter 2014 as part of the re-opening of the Olympic Park. This would mean the orbit tower would become an attraction, open for the public to purchase tickets and explore. With two observation platforms, the 35-storey tower is believed to have a 455 step spiral staircase, as well as a dining area for families to eat.

According to Boris Johnson, the Mayor of London, the tower will become: “The perfect iconic, cultural legacy.”

During the Olympics tickets to see the ArcelorMittal Orbit will be £15 for adults and £7 for children, however it’s debatable they may lower after the games to make it available to as many people as possible. The icon is hoped to attract at least one million visitors a year once the park reopens as the Queen Elizabeth Olympic Park after this summer’s Olympics.

Sonia has a passion for presenting and journalistic challenges. She has a special interest in music and Bollywood dancing. She loves the motto 'When you've got something to prove, there's nothing greater than a challenge.'
Popular British Asian Writers
Jeet Thayil shortlisted for Booker Prize 2012