Anish Kapoor is furious at a copycat of his sculpture unveiled in Xinjiang, China on August 11, 2015. The world-renowned artist wants to sue for plagiarism.

“It seems that in China today it is permissible to steal the creativity of others.”

British-Indian sculptor, Anish Kapoor, has threatened to sue the Chinese for plagiarising his artwork, Cloud Gate.

Also known as ‘The Bean’, Cloud Gate is a round-shaped and reflective sculpture designed by Kapoor.

The 110-ton stainless steel art piece was his first outdoor display, installed in Chicago in 2006.

However, images of the copycat sculpture appeared in a People’s Daily Online report on August 11, 2015.

The state-run media agency described it as ‘a stainless steel sculpture in the shape of an oil bubble’ and nicknamed it the ‘big oil bubble’.

The agency also said the sculpture had been under construction in Karamay, Xinjiang, since 2013. It is due to open to the public towards the end of August 2015.

Sculpture in shape of oil bubble is built at site of 1st oil well in Karamay, #Xinjiang http://t.co/AqbugmJr7o pic.twitter.com/jl0cATljTA

Upon discovering his original work has been copied without permission or credit, Kapoor protests in a statement.

He says: “It seems that in China today it is permissible to steal the creativity of others.

“I feel I must take this to the highest level and pursue those responsible in the courts. I hope that the Mayor of Chicago will join me in this action.

“The Chinese authorities must act to stop this kind of infringement and allow the full enforcement of copyright.” 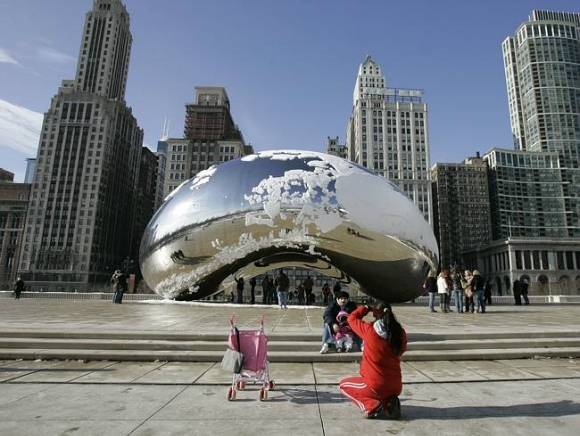 Chinese social media users instantly recognise ‘The Bean’ and one writes: “It looks almost the same as Chicago’s ‘Cloud Gate’! I remember it appeared in the movie Source Code.”

Some are so outrageous at how ‘the big oil bubble’ is a blatant copy of Kapoor’s work that they refuse to defend their own people.

Another user writes: “It’s such an obvious copy. Our designers are embarrassing us. Our ‘shanzhai’ (rip-off) speed is really quick.”

Although the Chinese authority confirms the artist is Chinese, his or her identity is kept secret.

Ma Jun, the planning and construction management section chief of Karamay’s Tourism Bureau, reveals the inspiration for the ‘oil bubble’.

“The idea comes from the Black Oil Mountain, which is a natural oil well in Karamay.”

“People can enter the big bubble to visit and hold activities. There are some small bubbles around to make it more fun.”

He also explains how the two sculptures differ, saying: “You can’t say we’re not allowed to build a round sculpture because there already is a round one.

“While we use similar materials, the shapes and meanings are different.

“Cloud Gate intends to reflect the sky, but ours reflects the ground. That’s why we used granite to imitate oil waves (in the area surrounding the sculpture).” 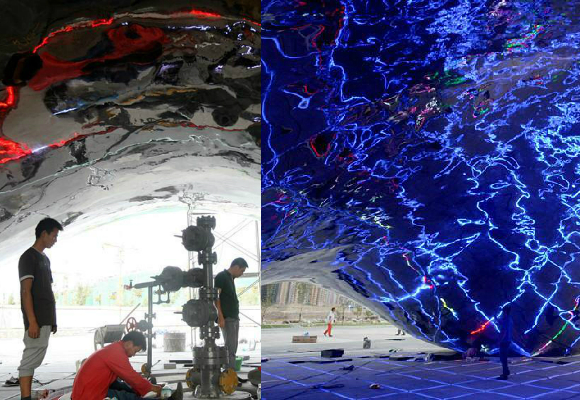 Kapoor may have to fly solo in taking legal action against the Chinese, as Cloud Gate’s hometown seems impassionate about the incident.

Rahmn Emanuel, Chicago’s mayor, says: “Imitation is the greatest form of flattery, is what I would say.

“And if you want to see original artwork like this or like the Bean, you come to Chicago.”

Kapoor can only hope he can set a precedent to protect artists’ intellectual property from the Chinese.