Anish Kapoor at the RIBA

Opened in conjunction with the annual Frieze Art Fair, the Royal Institute for British Architects (RIBA) presents a survey exhibition of the renowned Indian-born British artist, Anish Kapoor. A rare insight into the artist’s vision.

Displayed collectively in one gallery space, the works are viewed chronologically alongside photographs of the sculptures in situ or digital renderings of what the works may look like once constructed and placed. We are there to intimately focus on the models, imagining their sheer scale and gargantuous size in the real world.

These works from the past, present and future deal with Kapoor’s relationship to architecture and space, highlighting his collaborations with engineers, designers and architects, which would normally be confined to the private domain of his London studio. Some sculptures have been successfully constructed while others are mere pipe dreams to stay within these confines and in our mind and imagination.

In a recent interview Kapoor said,

‘A work has one type of life inside the studio and another outside. Of course, there’s no accounting for the public’s perception – it either enters the psyche or becomes just one more thing in the world.’

Included in the exhibition are models for Taratantara installed at the BALTIC in Gateshead (1999) created with Neil Thomas of Atelier One, the design for two subway stations entrances in Naples, a collaboration with Jan Kaplicky and Future Systems (2003) and Cloud Gate installed in Millenium Park, Chicago, USA (2004).

Click on the images of Anish Kapoor’s work below to see larger versions. 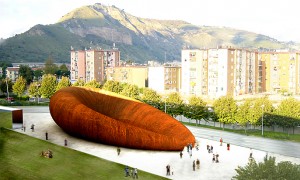 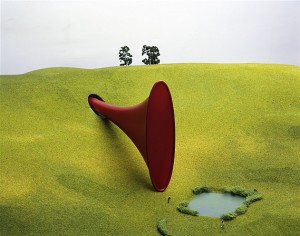 All of the individual models and maquettes show how vital scale is to Kapoor and how all works are about the human relationship with the spaces he creates or even destroys.

Anish Kapoor was born in Bombay in 1954 and has lived and worked in London since the 1970’s when he studied at Hornsey College of Art and Design and Chelsea School of Art. Over the past thirty years, he has exhibited internationally in locations including the Tate Gallery in London, BALTIC in Gateshead, Haus der Kunst in Muncih, Reina Sofia in Madrid, Musee des Beaux-Arts in Nantes and, more recently, at the ICA in Boston.

Kapoor was awarded the acclaimed Turner Prize in 1991 and a CBE in 2003. His newest commission, entitled Memory, is unveiled at the Deutsche Guggenheim in Berlin on 30th November 2008.

Rachel Marsden is an artist, freelance curator, arts journalist and writer with a specialist interest in contemporary Asian art specifically from India and China. She also writes for a-n Magazine and What's On UK. She lives and works in the West Midlands.
The Maharajah & The Kohinoor ~ The Play
Shades of Brown