Rani Moorthy is an artistic performer and writer from Manchester but originates from a Tamil and Malaysian background. Her play Shades of Brown explores the fascination of wanting to turn brown skin to white.

Shades of Brown is a one-woman play which is written and performed by Rani Moorthy. The play uses three characters to express the effects that different skin colour has on each person and exposes how this is not just an issue of black and white racism but also it has underlying issues such as self-hatred, rejection and identity loss. All three characters together bring a humorous side to the serious issues raised in this powerful storyline.

Rani Moorthy is from Rasa Productions based in Manchester, UK. The drama company was formed in 1998 by writer/performer Rani Moorthy, joined by producer Ed Higginson and video director Arthur Smith. Rasa is a noun used in three different Asian languages. Each has a slightly different meaning.

Rani herself grew up in a Malaysian/Tamil culture, that adored a light skinned completion. From a very young age Rani began to learn about the importance of living in a culture that carried a number of stereotypes like caste and class differences, to being told by her grandmother at the tender age of 5 that “You are dark skinned like me… you’d better be good at something or no man will marry you for your looks”. 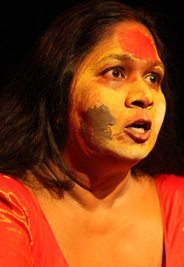 All around Rani as she grew up in her community, she saw the values of being light skinned and the downfalls of being dark skinned. Her Malaysian upbringing had deeply rooted this view in its culture. The colour of light skin was beautiful in the eyes of the majority and this was even the case in books and myths, while on the other hand, dark skinned people were frowned upon and resented.

As a first generation British Asian, Rani, is keen to develop her writing towards promoting her cultural diversity with a style that she will be recognised for. She has vast personal experiences which include being brought up in a difficult time in Malaysia, going to school in neighbouring Singapore with a passport and arriving in Britain to recognise a culture that was very different from what she knew in Asia.

Rani feels that British Asian writing has a great opportunity to open up into a larger space and is keen to be involved in progressing the opportunity.

Especially, writing about first generation experiences, using the humour and vitality brought to the country by that generation.

DESIblitz was given an exclusive chance to speak with Rani Moorthy. Watch and listen to the interview to hear what she had to say about this exciting production and an insight into her interesting career as a Brit-Asian writer and performer.

Here are some video clips from Shades of Brown.

A performance of the play took place on Friday the 14th November, 7.30pm at The Drum in Birmingham (UK). It will tour other parts of the UK, until its final performance in Bristol on 30th November 2008.

As part of the senior DESIblitz team, Indi is responsible for management and advertising. He especially loves producing stories with special video and photography features. His life motto is 'no pain, no gain...'
Anish Kapoor at the RIBA
Memory by Anish Kapoor