Filmmakers are finding success in the digital space. We present an exclusive Q&A with Indranil Banerjee about ‘4 Shades of Leap’ and his short films.

Indie and award-winning filmmaker Indranil Banerjee gears up for the mini-horror series, 4 Shades of Leap.

Indranil Banerjee was born into a Bengali Brahmin family in Kolkata, West Bengal on September 9, 1992.

His father, Amar Banerjee works as a finance manager at a famous farm in Kolkata.

His mother Shukla Banerjee is a housewife. He also has one elder sister named Indrani Banerjee. She has been a big inspiration on Indranil and is the head of his production company, Unity Pictures.

According to Indranil Banerjee, his filmmaking career may have come to an end had it not been for Indrani. She has always encouraged him through thick and thin.

His shorts and other works are available on popular streaming sites such as MX Player and Amazon Prime (USA, UK).

Indranil Banerjee also works as an assistant director across the Bengal industry. In an exclusive Q&A with DESIblitz, Indranil Banerjee talks about the horror mini-series 4 Shades of Leaps and his short films. 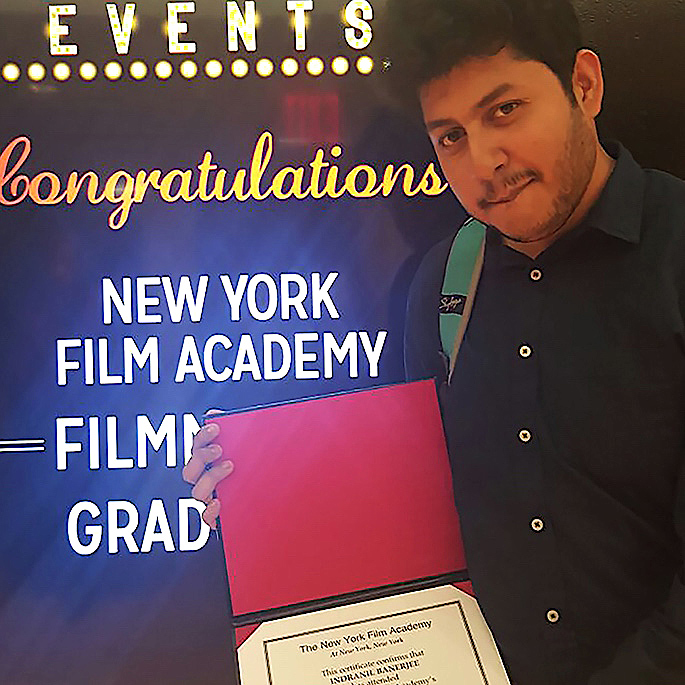 How did your journey as a filmmaker begin?

Exactly on February 20, 2015, was the date when my journey began as a filmmaker. Prior to that, I was a Freelance Photographer.

I used to skip classes during my college days and I was always a lone ranger with my DSLR. I use to have freezing moments, discovering how rich reality really is

On the aforementioned date, I was at a railway station (Jadavpur Station, Kolkata) near to my college where I was busy clicking my subject.

Suddenly at the platform, I saw a dog chasing a cat in a hilarious way. That is how I got my plot instantly. I remember I was so desperate to do a short film.

I called my very good friends Sounak Ray and Debopriya Chakraborty and the roles and I began shooting as soon as they reached the station.

It took exactly one hr to shoot. I was so happy when I named my 1st working film The Chase. This film got 25 official selections worldwide, along with 4 winning crowns.

The Chase was Sounak and Debopriya’s 1st debut film and my mine as a director. 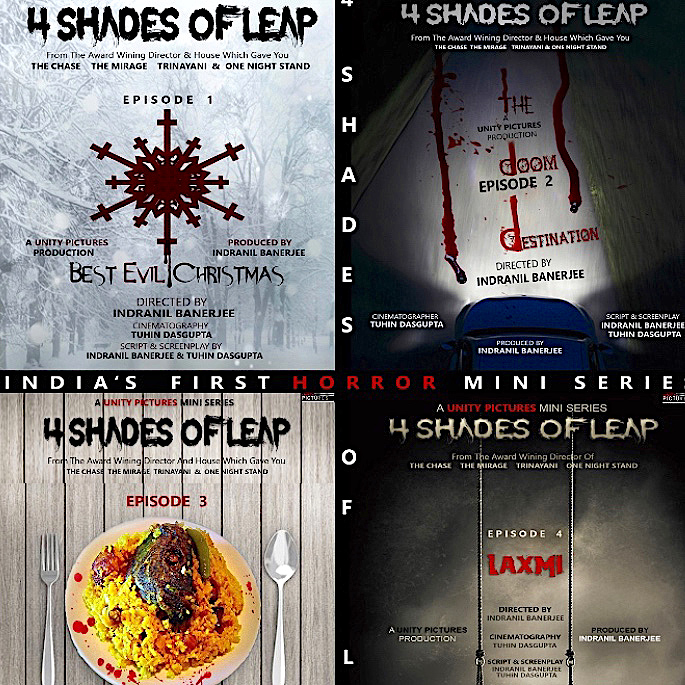 Tell us a little about 4 Shades of Leap and the research aspect?

After working on six award-winning shorts, I made the decision to make India’s 1st mini-series in the horror genre. I dedicate 4 Shades of Leap to true horror lovers.

The mini-series comes under my banner, Unity Pictures. The series revolved around four stories, which take inspiration from real incidents.

I am the writer, director and editor of the series. I was also responsible for giving sound to 4 Shades of Leap.

My debutant cinematographer Tuhin Dasgupta was also the co-writer of this series. I and Tuhin took out time to research before finalising our 1st draft (script).

We went to each and every place, asking those people who saw or heard those incidents.

We saw the rooms of the characters, Merry Sebastian and Lisa Gomez at the girls’ hostel near Baruipur, West Bengal. This is the story of two girls in the very first episode, ‘Best Evil Christmas.’

Friends of Lisa and Merry told us about the horrifying incident which took place at their hostel on December 25, 2009, December.

For episode two, ‘The Doom Destination,’ we went to Raj and Pulok’s house and office, gathering very disturbing information.

In relation to episode three, ‘Muri Ghunto we spoke with the actual friend (Tannishtha Sen) of the character Mamon. She told us the true story. Then we also went to the bazaar for a little research.

For episode four, ‘Laxmi,’ many mothers told us that their kids were smiling and looking for a lady who was wearing a white saree.

The mysterious lady was not seen by any of the kids’ parents. A chaiwala (tea maker) also revealed more about the real case. 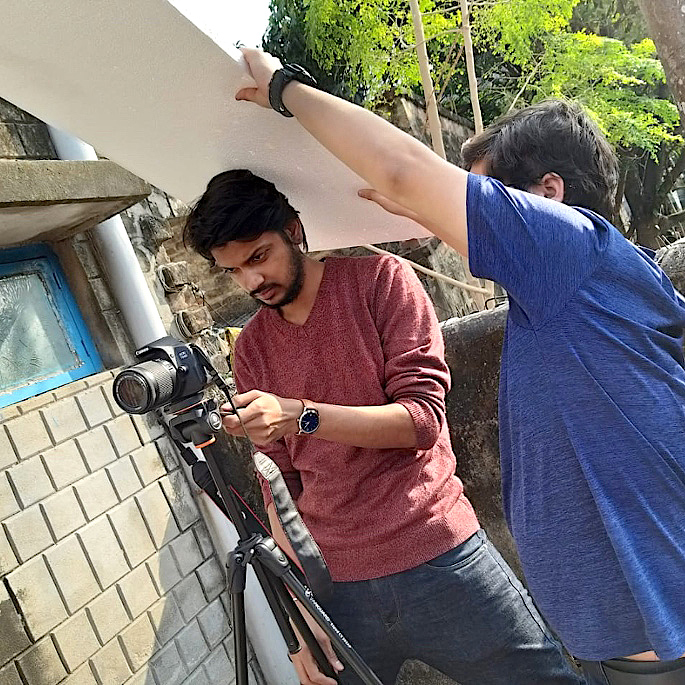 What can you tell us about the duration and episodes?

This mini-series consists of four episodes of five minutes duration each.

The first episode shows Lisa asking Merry to come to her home during the cold winter Christmas vacation. period. Merry does not listen to Lisa and even. Lina also decides to stay back with her.

Both the friends decide to make this the best Christmas ever. They go to sleep in the afternoon after having fun. However, evil makes an appearance in Merry’s room.

The second episode, ‘The Doom Destination’ is about Raj and Pulok who leave from their office on January 22, 2012.

“The entire shoot took place in a car except for the opening shot, which is the office part.”

The third episode, ‘Muri Ghonto’ revolves around Mamon who is on her way to the fish market.

Prior to leaving for the market, Mamon’s father informs her that the Muri Ghonto (Bengali dish cooked with Rohu or Katla Fish head) she cooked the other day was delicious. Mamon becomes happy with the compliment.

“Mamon is upset upon return as she gets into trouble with a fish seller.”

While having a conversation with her dad, she suddenly sees something, which will give everyone a mild stroke.

The fourth episode ‘Laxmi’ focuses on a woman who used to stand beside a swing watching kids and smiling. The woman’s only child dies as a result of a tragic accident inside that playground. 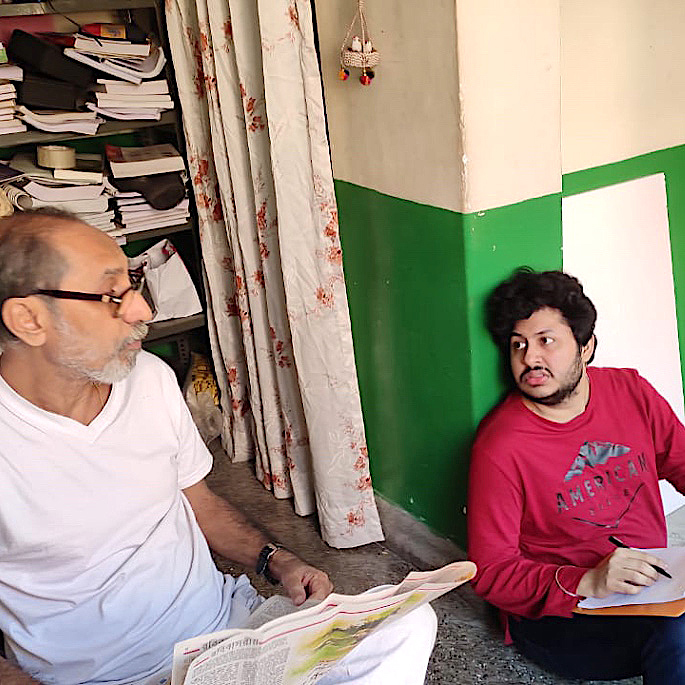 Who is the main cast and what characters are they playing?

In episode one, ‘Best Evil Christmas’ I finalised Sukanya Sen as Lisa. She was a ‘Unnish Kuri Glam Hunt Winner’  in Kolkata and a successful model.

She Previously did ‘Trinayani: The 3rd Eye’ with me. For the role of Merry, I had to choose none other than Debopriya Chakraborty. She is the actress from ‘The Chase,’ stealing the heart of everyone.

For episode two, ‘The Doomed Destination’ there is Asish Pathak. She is a renowned face across Bengali television and web series.

Then there is Riddhimaan Khan as Raj, also a star from Bengal Television. Finally, there is Arka Bhattacharya, introducing as Pulok.

For episode four, ‘Laxmi’ I chose the very talented Deboshmita Chakraborty who worked with me in my hit Telefilm ‘Bahannoborti’ which was aired on an established Bengali Channel.

I made very little changes to the character of ‘Laxmi.’ I portrayed her just in a wall picture. 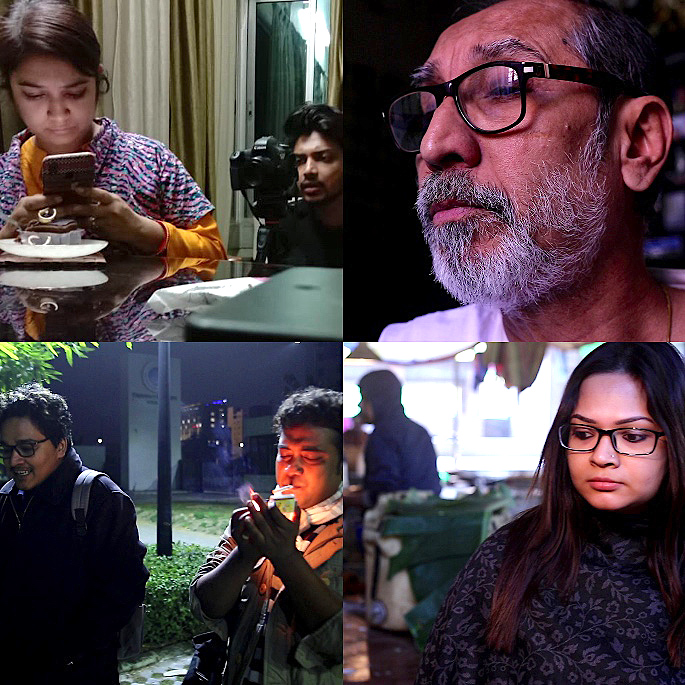 Can you shed light on exploring the horror genre and the music?

I like drama and thriller the most. But It was Anurag Kashyap, Dibakar Banerjee, Karan Johar and Zoya Akhtar who were a big inspiration to me and this series respectively.

But I was heartbroken and shocked while watching Ghost Stories.

Also, Tuhin gave me a hint to do this. I got the gist from him like the shades, the four different atmosphere, the four incredible horror incidents and all of this in a leap year (2020).

So yeah I gave it a try and I am very happy.

I did my first original background score with a violin, portraying my very famous serial killer ‘John Bussey’ from my fourth award-winning short One Night Stand (2019).

So with 4 Shades Of Leap, I tried to give four different rhythms so that the audience can get choked and feel the tension, thrill and goosebumps through my music.

The theme music of this mini-series was appreciated as well during our Official YouTube channel, Unity Pictures. 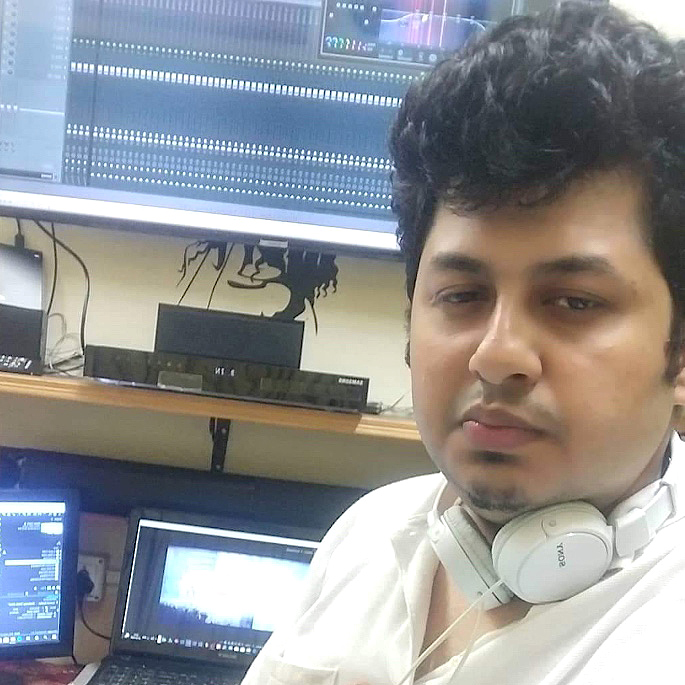 Did COVID-19 impact you and the feedback to Hakchhoooo?

Well COVID-19 was a blessing to me. Yes, you heard it right. But I was waiting for this opportunity for brainstorming my scripts.

I also took the opportunity to watch original web shows and complete some new books and films, which I had not read/watched or finished due to shooting.

I completed three full-length feature scripts (two in Bengal, one In English) and a sitcom web series during the lockdown. which you can say is a ‘Dream Project’ for me.

The response of my lockdown short Hakchoooo – all sneeze is not bad was positive.

It was highly appreciated on my official YouTube channel. I received lots of comments, personal messages, calls and even very good reviews from many renowned critics.

So I am extremely happy with the success of Hakchoooo: A Lockdown Short. 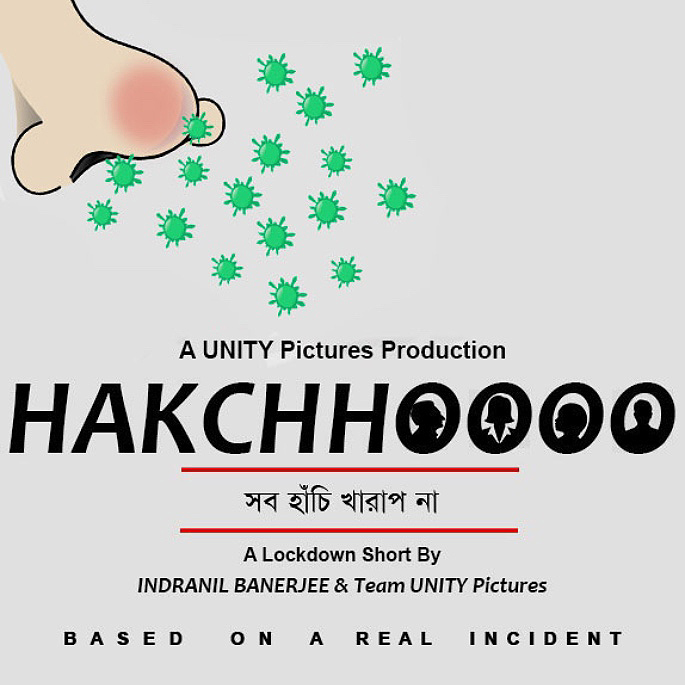 What are your best memories of the award-winning shorts that you directed?

There are many fond memories that I have for my award-winning shorts which I had directed.

Best memories from The Chase (2015) include being a finalist at the Los Angeles Cenefest, Hollywood and the police chasing my lead cast Sounak, while shooting a chasing scene.

The police thought something was wrong, But after explaining the scenario they offered tea as we had a neat and clean pack up.

Unforgettable memories from The Mirage (2016) include my sister Indrani Banerjee coming to New Jersey from Vegas as we needed her car and herself as the lead.

Indrani’s pet dog Pluto who had come with her was a little shaken by the excessive light and so much noise during shooting.

Despite having a tough schedule, this short won in four categories. It was officially selected in 22 worldwide film festivals. 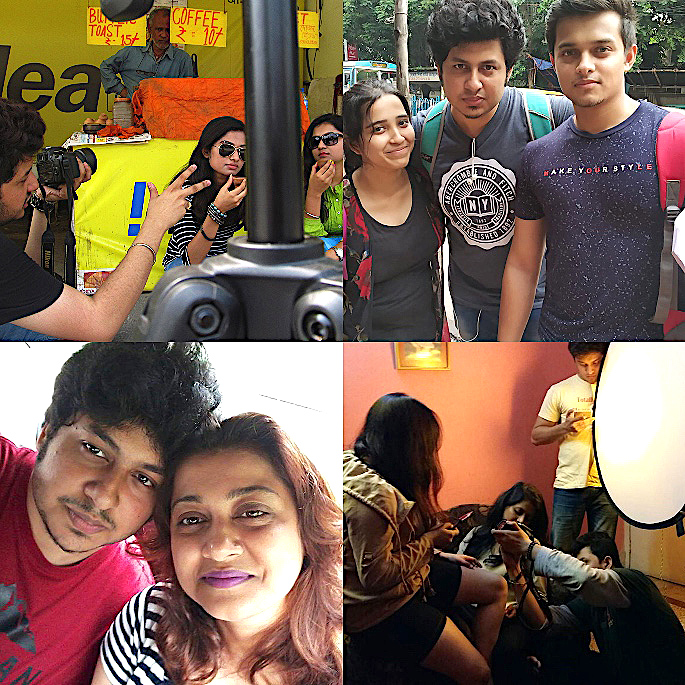 The most interesting memory of Trinayani: The Third Eye (2017) was when I had to act. I had previously never acted in my life, despite getting many propositions from many producers and directors.

Normally I cannot stop laughing in front of the camera and in any case I am not fond of acting. Hence, while shooting Trinayani I had chosen a guy for an important role with two conflict looks.

However, he rejected the offer at the 11th hour and without thinking a sec I made the decision to act myself.

“I don’t know why it was pretty easy for me and my role was very much appreciated.”

Finally, for One Night Stand, I can recall yet another story on a dog. Around 10.30 pm on a very cold night (Jan 2018), I was shooting a vital shot at a park near to my house in Kolkata (Kasba).

But a dog was continuously barking. His bark became loud and more aggressive when anyone came in front of him.

I somehow managed. The entire dialogue part was thoroughly done via ADR (Dubbing). But the dog also helped me to focus on my sound as I used his barking voice to establish a lonely thrilling situation.

Watch the official teaser to 4 Shades of Leap here:

This mini-series will also run under several worldwide prestigious film festivals as well.

Indranil Banerjee has big plans for the future including making more a sitcom and a full-length feature film.