‘East is East’ Theatrical at the REP

Written in 1996, ‘East is East’ made its debut at the REP in Birmingham. It then became a BAFTA winning film, and now directed by Iqbal Khan, it’s back on stage at the REP.

The play was written by Ayub Khan-Din in 1996

The adaptation of ‘East is East’ on stage at the Birmingham Repertory Theatre (REP) is highly commended for its presentation and acting of the play written by Ayub-Khan Din.

This is not the first time East is East appears on the theatre stage. The play was written by Ayub Khan-Din in 1996 and it received its world premiere at The REP in the same year. The play was very well received and it was then subsequently made into a BAFTA award-winning film. 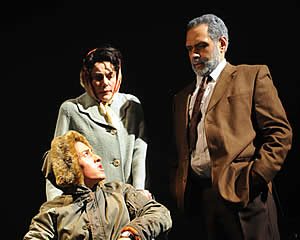 The play is set in Salford in the UK, in 1971. It is a comedy which also explores the darker areas of a mixed-race marriage between a Pakistani man and a British white woman, and their family of six sons and one daughter. It starts at the time when the elder son has left home disrespecting his father’s wishes of accepting an arranged marriage. The rest of the children are now living in a family battle zone of ‘pull and tug’ between the two cultures that they are trying to adopt to develop some kind of an identity.

Their mother, Ella Khan, is a dedicated mum from the North of England and has put her children’s interests first, whilst their father, George Khan, being a staunch Pakistani is living his life trying to please his society and culture and shows this by being violent and forceful towards his family.

The play delves into the difficulties of fitting into a specific culture during that era and touches on areas of domestic violence, sibling unity and rivalry, cultural imposition and the shenanigans of arranged marriage. The comedy is neatly inter twinned with the challenges of each culture trying to ‘win’ through the characters.

In the Iqbal Khan directed version, George Khan played by the Scottish Asian actor, Archie Lal, is the central character of the play, who is the father and head of the mixed family household. He has allegiance to Pakistan and is convinced Kashmir belongs to Pakistan, not India. He is determined to bring up his family in a traditional manner which demands respect from his wife and children.

Archie plays the character in an excellent and resembling style to Om Puri’s version in the film whilst bringing his own to the role.

The broken English and hysterical interludes of Punjabi swearing, has audiences laughing out loud.

George’s ‘white’ wife, Ella Khan, is played by the delightful Belinda Lang of 2 Point 4 Children, Dear John, Life X 3 and Ring Around The Moon fame  (to name a few of her credits), plays the role of Mrs Khan in a very adroit style. She gives the character the exact balance to reflect a white mother married to a Pakistani man bringing up her children of mixed race. 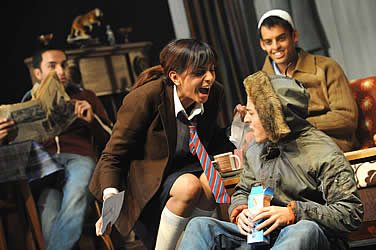 Comedy plays a role within all the characters but some of the funniest include, George Khan, the father, Sajit Khan, the youngest son in the family, who lives in a parka coat most of the play and runs to the coal shed for peace; Muneer Khan, the son who wants to be a role model for his father by being a devout Muslim; Meena Khan for  her interaction between the brothers, especially with Saleem Khan, who has told his father he is becoming an engineer but is really studying art.

Iqbal Khan the director does an excellent job to bring the ‘East is East’ script alive on stage and has nurtured all the actors to deliver an incredibly funny, realistic and balanced performance. He demonstrates the ability to transform Ayub Khan Din’s work into a performance that is liked by all despite their ethnicity and cultural background.

DESIblitz.com met up with two of the cast members of East is East, Anjli Mohindra who plays the sister of the brothers, Meena Khan in the play and Chris Nayak, who plays Abdul Khan, one of the sons set-up for the arranged marriage. Watch the video interview below to get their views on this great play and their experiences as British Asian actors. 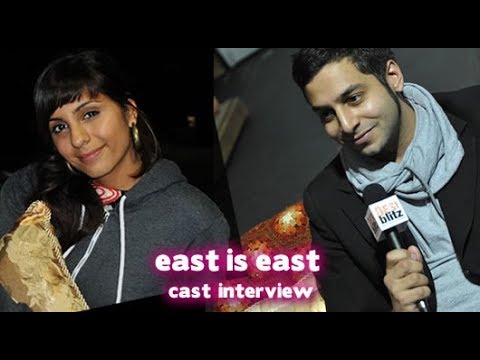 The set plays a very important part in the stage version of East is East with core scene areas portrayed on the stage all physically and automatically moved with clever design by Simon Higlett. The living rooms of the family home, the fish and chip shop and a bridge that arches over a virtual river are three aspects very well done along with smoking chimneys that hang in front of a Yorkshire skyline.

The Sound design by Dan Hoole brings to life some classic Bollywood songs which fade back into their source of the radio in the living room. Lighting by Tim Mitchell gives the play a unique dramatised look with vibrancy where needed and the fight directing by Kevin McCurdy definitely adds the spice to the acting which is realistic enough to bring out concerned sighs in the audience. 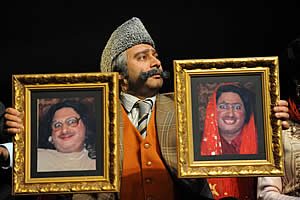 Some of the most funniest scenes include the anguish of the youngest son, Sajit Khan, who has to go through a circumcision operation; disagreements between George Khan and Ella Khan; the realistic bickering between the siblings and without doubt, the arranged marriage meeting between the families, producing  laughter totally flooding the REP auditorium.

This play presents a great depiction of British Asian family life represented by an Anglo-Pakistani family from the 1970’s with huge dollops of comedy that will make you laugh for sure whether you are Brit-Asian or not.

View photos from our special meet with the cast.