Indian tennis star Sania Mirza has taken to Twitter to respond to the Indian MP K Laxman. He has said she cannot be the brand ambassador for Telangana because she is no longer Indian, a claim Mirza has hit back at.

"I am an Indian, who will remain an Indian until the end of my life."

Sania Mirza has taken to Twitter to respond to the MP who questioned her appointment as the brand ambassador for the newly-created state of Telangana because she is married to the Pakistani cricketer, Shoaib Malik.

Telangana Chief Minister K Chandrasekhar awarded Mirza with a letter of appointment to the position of brand ambassador, accompanied by a cheque for 10m rupees (£97,969) to Mirza, who is India’s most successful female tennis player.

The ceremony was held at the state capital, Hyderabad, and the Chief Minister of Telangana said of Mirza: “Telengana is proud of Sania who is a true Hyderabadi. She’s now ranked number five in international tennis and we wish she becomes the number one.” 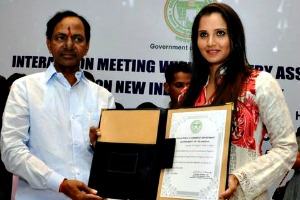 However, after the ceremony, K Laxman, the Telangana MP for India’s ruling BJP party criticised the decision, saying that she was born in Maharashtra and is therefore a ‘non-local’. He also called her the ‘daughter-in-law’ of Pakistan because her husband is Pakistani.

Taking a dislike to the accusations against her Indian heritage, Mirza has since asserted on Twitter: “I am an Indian, who will remain an Indian until the end of my life.”

In an official ‘Twitter’ statement, Sania went on to recount her background by saying: “I was born in Mumbai as my mother needed to be at a specialist hospital since she was seriously unwell at the time of my birth. I can home to Hyderabad whenI was 3 weeks old.”

Mirza has in fact detailed her entire heritage and connection to the city of Hyderabad over Twitter, in a clear attempt to refute all questioning of her nationality and new position as a brand ambassador.

Mirza finished her response by stating: “So, my family belongs to Hyderabad for more than a century and I strongly condemn any attempts by any person, whosoever, to brand me an outsider. I hope this clears all doubts and issues. Sania Mirza.” 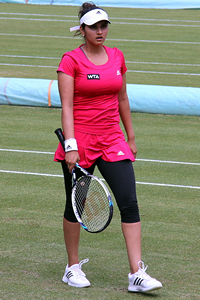 It is unfortunate that after all the awards and accolades Mirza has achieved, she still has to defend her Indian nationality because of her choice to marry a Pakistani.

Mirza has not only retained her Indian citizenship and passport, but has not even changed her name to match her husband’s since their marriage in 2010. She has continued to represent India in competitions around the world.

“Honestly there are many who could represent Telangana better than #SaniaMirza… and not ask for any money in return.”

However, author Sonia Faleiro tweeted: “Ironically, it’s #SaniaMirza who has given #India so much to be proud of. Certain politicians, on the other hand, only fill us with shame.”

Some have come out on social media to defend Mirza’s appointment, whilst others have criticised it. This debate is overshadowed though, by the fact that Mirza has not had to defend her ability to be the brand ambassador for Telangana, but her Indian heritage.

Mirza has already had to fight much scepticism in her bid to be a worldwide tennis champion.

She has said in the past: “When I picked up a tennis racquet, a girl wanting to play Wimbledon was unheard of. Even though things have changed so much over the last 20 years, things still have a long way to go.”

Hopefully, Mirza’s defence of her Indian heritage and insistence on her ties to her homeland will clear any doubts about her commitment to the country that she has represented for so long.

Eleanor is an English undergraduate, who enjoys reading, writing and anything media related. Aside from journalism, she is also passionate about music and believes in the motto: “When you love what you do, you’ll never work another day in your life.”
Commonwealth Games 2014 Opening Ceremony
Scottish Athletes to benefit from Medal Win