The Glasgow 2014 Commonwealth Games came to an end with a glittering Closing Ceremony. Superstar Kylie Minogue was the top act. His Royal Highness (HRH), Prince Edward declared the Games Closed, before the Commonwealth Flag was handed over to Gold Coast City, Australia.

"Glasgow, you have set the bar very high with such an inspiring celebration of sport and culture."

Following eleven days of fierce competition, the 20th edition of the Commonwealth Games came to an end with a glitzy Closing Ceremony on 03 August 2014.

Hampden Park played host to the Closing Ceremony of the Glasgow 2014 Commonwealth Games. It was truly a gala event with lots of colour and performances, including traditional Scottish music.

The event also celebrated the next edition of the Games, which will take place in the City of Gold Coast, Australia in 2018.

As the countdown began for the Closing Ceremony, host for the evening and popular Radio DJ, Ally McCrae welcomed all the athletes, volunteers and distinguished guests. 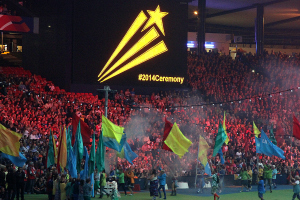 The athletes from seventy-one Commonwealth nations entered the stadium to a standing ovation. The athletes walked around the stadium, waving to everyone present in the ground. With an hour to go, teams from India and Pakistan also came on to the field.

Chairman of the Glasgow 2014 Organising Committee, Lord Smith of Kelvin thanked all the athletes, officials, clyde-siders (volunteers), and respective partners involved in the Games.

Speaking on behalf of a united Scotland, Lord Smith said: “Tonight we stand together, Tonight our hearts are filled with pride. Tonight we are Commonwealth connected.” 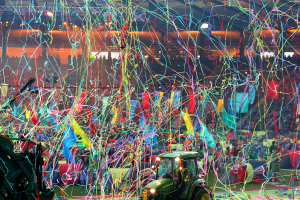 He continued: “Sports Unites us. It brings us together as athletes, as fans and as friends, Sports transcends language, nationality and politics. No matter who you are or where you are, sport has the power of make you feel part of something bigger.”

One of the highlights of the evening was when His Royal Highness (HRH), Prince Imran gave the David Dixon award to Welsh athlete, Francesca Jones (Frankie Jones) for her outstanding Commonwealth Games performance. The twenty-three year old won six medals in the rhythmic gymnastics competition.

“The Commonwealth Games are known as the Friendly Games. Glasgow has succeeded in making them even more than that. These have truly been the People’s Games.”

The Commonwealth Games Flag was then handed over to the next host nation, Australia. The 2018 games will be held in Gold Coast, Queensland.

Jann Stuckey, Queensland Minister for Tourism and the Gold Coast 2018 Commonwealth Games accepted the flag during the handover ceremony.

“Glasgow, you have set the bar very high with such an inspiring celebration of sport and culture. We aim to emulate your outstanding success with an athlete-focus Games, excellent competition and a fun, friendly environment,” said the Minister. 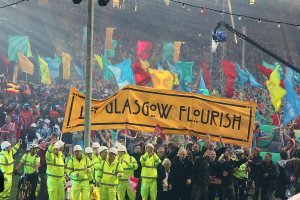 “I am honoured to receive the flag on behalf of the people of City of Gold Coast, Australia. We accept this responsibility with great pride and in the spirit of the Commonwealth Games. Thank you.”

Australian pop sensation Kylie Minogue was the top act of the evening as she reaffirmed the transfer of the XXI (21st) Commonwealth Games to the nation down under. Kylie performed some of her best numbers on stage, delighting her fans across the globe.

The night as well as the Commonwealth Games ended with a spectacular fireworks display. The Closing Ceremony was simply electrifying and one which entertained everyone thoroughly.

From a competition perspective, England topped the final medals tally with 174 medals, including fifty-eight Gold. 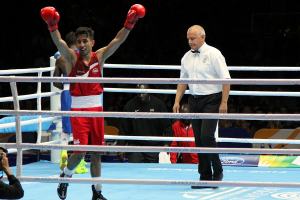 One of the emerging stars for England was talented Leeds Boxer Qais Ashfaq who won a Silver medal in the Men’s 56 kg Bantamweight competition.

Australia were in second place with forty-nine Gold, ending with 137 medals overall. In third place were Canada, winning thirty-two Gold and eighty-two medals in total.

Hosts Scotland were at number four with a total of fifty-three medals, their highest ever medals tally at the Commonwealth Games. Scotland’s Akeel Ahmed reached the quarter-finals of the Men’s 46 kg Light Flyweight event.

Team India finished in fifth position after winning sixty-four medals, including 15 Gold, 30 Silver and 19 Bronze. Pakistan ended their campaign with three Silver medals and one Bronze.

The biggest sporting and cultural event held in Glasgow will be remembered for many years to come. DESIblitz congratulates Scotland on hosting one of the best Commonwealth Games ever.

Faisal has creative experience in the fusion of media and communication and research which increase awareness of global issues in post-conflict, emerging and democratic societies. His life motto is: "persevere, for success is near..."
Scottish Athletes to benefit from Medal Win
Pakistan Roundup ~ 2014 Commonwealth Games