The Pakistan team finished with four medals at the Glasgow 2014 Commonwealth Games. Team Green won three Silvers and one Bronze medal during the multi-sport competition. Muhammad Waseem, Qamar Abbas, Shah Hussain Shah and Azhar Hussain all won a medal each.

“As a boxer, you know when you’re winning or not. My opponent tried very hard but never once made proper contact.”

Over ten days of the Glasgow 2014 Commonwealth Games, sixty-two athletes from the Pakistan team contested in nine different sports.

Azhar Hussain, Gold medalist from the 2010 Commonwealth Games had to settle for a Bronze at Glasgow 2014. 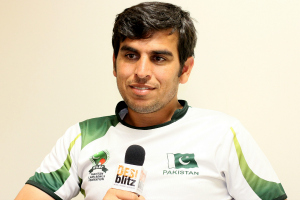 Ayub and Muzahir lost all three games in the Men’s Triples competition. The Pakistan triples team did however give a tough time to the Australians during they’re opening section play match.

Mohammad Shahzad suffered four consecutive losses in Section B of the Men’s Singles event, including a narrow 20-18 defeat to India’s Sunil Bahadur.

Much to everyone’s surprise, Muhammad Inam Butt failed to win a medal as he lost to Pawan Kumar of India in the Bronze match of the 86 kg wrestling event.

Inam was hoping to repeat his Gold winning performance from Delhi 2010, but on this occasion was not at his very best.

Captain, Muhammad Waseem was the star of Pakistan’s sixty-two-member contingent, which participated at Glasgow 2014. Waseem won Boxing Silver for Pakistan in the Men’s Flyweight 56 kg competition.

Two times national champion, Waseem enjoyed a bye in the first round of the competition, making his way straight to round thirty-two. 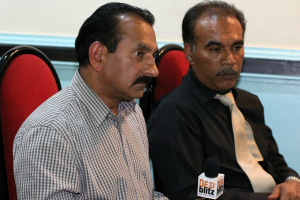 In the semi-finals match, Waseem faced Abdul Omar, an impressive twenty-year old from Ghana. The match was contested over three rounds, with each round lasting three minutes.

Waseem opened smoothly with his speed and fast movement. He attacked from the inside as Omar was backed into the corner. The brisk start from Waseem, comfortably gave him Round 1.

The 26-year-old out thought his opponent in Round 2 as he drove Omar back once again, showing terrific speed.

Omar then had a standing count, following a good shot from Waseem. Though Waseem’s focus just drifted at the end, he still won the round comfortably. 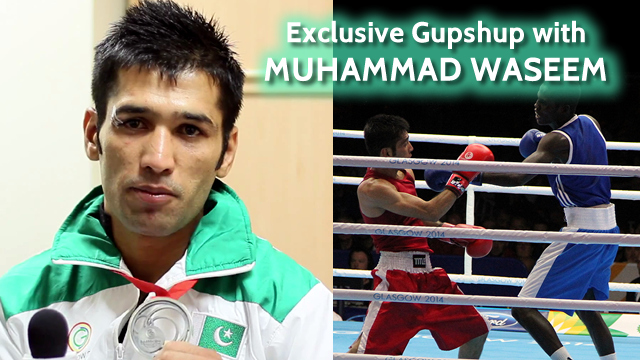 In the third and final round, Waseem got in a good right hand shot from the top, demonstrating his superb variation.

At the end of the fight, Waseem was awarded an unanimous decision, winning 3-0 on points. Waseem had made it through to his first Commonwealth Games final.

In the final Waseem took on Australian youngster, Andrew Moloney. Introduced to the ring first, a confident Waseem entered the SSE Hydro arena wearing a red vest and shorts displaying the word ‘title’ on the top. 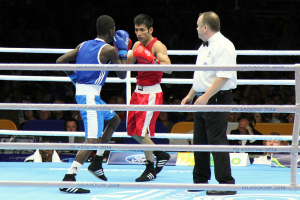 His opponent Moloney who was fighting from the blue corner, performed brilliantly in the semi-finals against Reece McFadden of Scotland.

Leading up to the final, Waseem received some useful tips from British boxer Amir Khan. Amir and his brother Haroon Khan were present during Boxing finals day.

Both Waseem and Moloney were very similar in terms of height and reach. With his speed, Waseem had the potential to combine 4-5 quick punches.

The game was a very closely fought battle, with neither boxer dominating the match. At the end of the final round, both boxers seemed positive about victory, especially Moloney who had won the opening two rounds.

Moloney was declared Commonwealth champion in the Flyweight division, receiving a 3-0 unanimous decision in his favour.

Completely shocked with the result, Waseem along with his many fans felt he had been deprived victory by a controversial decision.

After the match a frustrated Waseem said:

“It was very exciting, but the referees’ decision was controversial. I know I was winning, even my opponent and his coaches thought I was winning. I dominated the fight from the get go.”

He added: “As a boxer, you know when you’re winning or not. My opponent tried very hard but never once made proper contact.”

“Waseem was a better boxer in the ring technically and talent-wise. He competed with all his heart in the last two rounds; however, I can only say that it wasn’t his day. His opponent got lucky.” 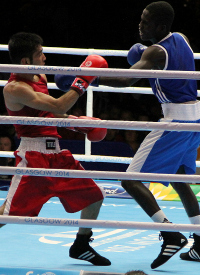 In all fairness, if one was to look at the fight again, Waseem’s tempo was slow, which influenced the judges to award the decision in favour of Moloney.

Having said all that it was a close game and it was another wake cup call for the boxing world to introduce a more accurate points system.

Other than Boxing, Shah Hussain Shah won a Silver in the 100 kg judo event. The experienced Euon Burton of Scotland beat the talented twenty-one year old 110-0 in the final.

Pehalwan Qamar Abbas collected a Silver medal after losing to Sushil Kumar of India in the Men’s Freestyle 74 kg event final. Qamar has a good future ahead and will be Going for Gold at the Rio 2016 Olympic Games.

Pakistani wrestler, Azhar Hussain came back with a medal by winning the Bronze in the Men’s 57 kg Freestyle event.

Pakistan will be relatively happy with their medals tally, especially as the team was announced very late. Hence the Green team had very little time to prepare.

Pakistan will now look ahead to the Olympic Games in 2016, hopefully with a fully strengthened squad.

Faisal has creative experience in the fusion of media and communication and research which increase awareness of global issues in post-conflict, emerging and democratic societies. His life motto is: "persevere, for success is near..."
Commonwealth Games 2014 Closing Ceremony
Team India Roundup ~ Commonwealth Games 2014