Team India ended the Glasgow 2014 Commonwealth Games in fifth place with a total of sixty-four medals. Parupalli Kashyap became the first Indian shuttler to win the Men’s singles badminton Gold in thirty-two years. Two Indian officials were arrested, before charges were dropped against them.

“Dipika has always been a great finisher of points while I normally set it up."

India ended its campaign with sixty-four medals at the Glasgow 2014 Commonwealth Games, which included 15 Gold, 30 Silver and 19 Bronze.

The team also did extremely well in sports such as discuss, squash and gymnastics. Five of the medals were won by the boxing contingent.

India finished the Commonwealth Games on an unpleasant note following the arrest of two officials who were later released after charges were dropped.

Whilst there were many great performances by Indian athletes, lets take a look back at some of the top achievers: 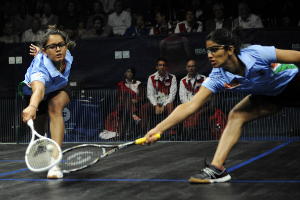 The Indian pair of Dipika Pallikal and Joshana Chinappa clinched India’s first ever squash medal at the Commonwealth Games.

They won a Gold medal in the Women’s doubles competition after defeating top seeds, Jenny Duncalf and Laura Massaro (ENG) 11-6 11-8 in the final.

Speaking about the winning combination, Joshana said:“Dipika has always been a great finisher of points while I normally set it up.”

Abhinav Bindra has been the most successful Indian shooter at the games, winning seven medals across five Commonwealth appearances.

After announcing that this would be his last Commonwealth Games, Bindra made sure that he would finish on a winning note. En route to winning the Gold, Bindra set a new Games record in the 10 metre air rifle event. 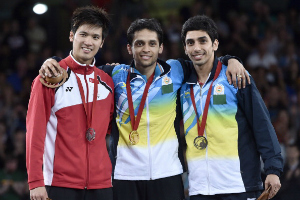 “I’m fortunate to win gold. It was a lucky day for me,” said Bindra modestly.

Parupalli Kashyap became the first Indian to win the Men’s singles badminton Gold at the Commonwealth Games in thirty-two years.

He is now also the third Indian to win the Men’s singles Gold at the Games. Prakash Padukone (1978) and Syed Modi (1982) were the other two men to have won Gold at the Commonwealth Games.

The twenty-seven year old from Hyderabad pulled off a brilliant victory in the final, beating Derek Wong of Singapore 21-14 11-21 and 21-19.

After celebrating the historic win, Kashyap said: “In this kind of big game to win gold is a big deal for me. It’s like a dream. I have dreamt of this since I was a child.”

“I’m so happy. This championship means a lot to me. These Games come every four years and that’s what drove me on,” he added. 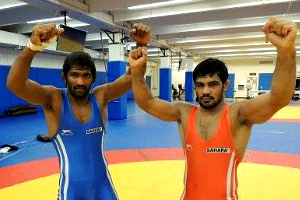 Sushil Kumar and Yogeshwar Dutt became double Commonwealth champions in the sport of wrestling. Despite changing their weight categories, both wrestlers claimed Gold for India.

Not only did fans see India win medals, but they also got to witness some of the rising stars of the country.

Described as India’s boxing princess, Pinky Rani put up a close fight in the semi-finals. Pinky had to settle for a Bronze medal following a split decision. Pinky is a great prospect for the future and already stands amongst the best boxers around the world.

Twenty-two year old, Satish Sivalingham was one of three Indians to win Gold in weightlifting. Satish, a Southern Railway employee, set a new Games record (149 snatch) in the 77 kg category event, lifting a total of 328 kilograms.

Dipika Karmakar created history by becoming the first Indian athlete to win a gymnastics medal at the Commonwealth Games. 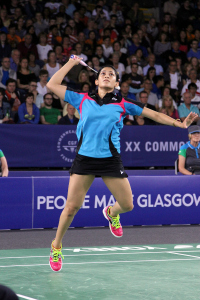 Dipika’s Bronze medal not only revealed her talent but demonstrated her fighting spirit as she came back from last position to finish third.

Speaking to the media, Dipika said: “The aim was to win a medal from Glasgow. I am happy to have won a Silver medal.”

One of the best young athletes on show at Glasgow 2014 was nineteen-year old Vinesh Phogat who won a Gold medal on debut in the Women’s Freestyle 48 kg wrestling event.

There were many other winners for Team India, including glamour boy Vijender Singh who won a Silver medal in the Men’s Middleweight competition.

Jwala Gutta and Ashwini Ponaappa had to settle for Silver in the Women’s doubles badminton final. The duo lost the Gold medal match to Vivian Kah Mun Hoo and Khe Wei Woon (MAS) in straight sets 21-17 23-21.

On the last day of the games, the big news from the visitor’s camp was that two Indian Commonwealth Games officials were arrested on alleged assault.

After appearing at a Glasgow Court on Monday 05 August, 2014, charges were dropped against both men due to lack of evidence.

India will be very pleased finishing fifth in the medals table, especially as they beat hosts Scotland overall. The future is bright for Team India with so many young prospects coming through.

Faisal has creative experience in the fusion of media and communication and research which increase awareness of global issues in post-conflict, emerging and democratic societies. His life motto is: "persevere, for success is near..."
Pakistan Roundup ~ 2014 Commonwealth Games
World Kabaddi League 2014