Ex-husband of Samia Shahid, 28 has confessed to strangling the British Pakistani to death. Her father has also been formally arrested as a prime suspect.

"She told me under oath that her first marriage was a forced marriage."

Samia, aged 28 from Bradford was strangled to death by a 7.5 inch slash to her neck in Pandori village, Pakistan.

Ex-husband,  Shakil, whom Samia was forced to marry, had initially been arrested on the suspicion of murder.

However, her family refuted these claims, stating she had died of a heart attack or a severe asthma attack, thus had her buried.

Samia’s father, Mohammad Shahid has also been held accountable for involvement in his daughters murder.

Her second husband, Syed Mukhtar Kazam believes Samia was killed because of her marriage to him.

The beautician’s family had disapproved of her marriage with Syed, but claimed they had accepted it for their daughter’s happiness.

She was forced into hiding with her husband Syed Mukhtar Kazam, and was currently residing with him in Dubai.

Syed said Ms.Shahid had received phone calls from her father claiming he was unwell. He kept asking if she could visit him and out of desperation, sent his daughter a plane ticket.

Samia Shahid reluctantly made a trip to Pakistan, unaware what the consequences would be. 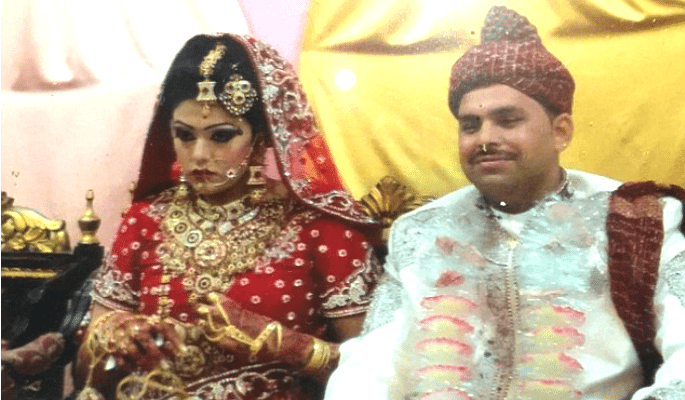 Abu Bakar Khuda Bux, who has been the lead investigator in the case said that there has been several questioning of both Samia’s ex-husband and her father. The two were arrested over the weekend.

Speaking about the case, Bux stated:

‘All the evidence we have is leading to their involvement in the murder,’ he said. ‘We are collecting more evidence before we sent the case to court.’

However, he has refused to comment on Mohammed Shakeel’s confession as he believes the investigation is not yet over.

The post-mortem report stated that Samia Shahid had a ‘reddish brown bruise’ on her neck, with blood, saliva and ‘froth coming from her mouth’.

“I am releasing this picture of my wife’s dead body because I want the world to know that she didn’t die of natural causes. She was murdered.”

Syed Sibtain Kazmi, an Islamic scholar whom Samia had met with at Anjuman-e-Haideria Shia mosque has also been a vital witness in the case.

Recalling his meetings with the victim, he told the BBC:

“She told me under oath that her first marriage was a forced marriage, which happened without her free will as she was pressurised into the marriage by her family.”

Mr Kazmi reported that when Samia’s relatives had figured out she was seeking advice from him regarding divorce, the Islamic Scholar began to receive death threats.

He was supposedly confronted by a relative:

“Our daughter is missing from home and you know where she is. The issue will be resolved but you will have to pay a high price for your role.”

“I recorded all these threats and handed them over to police without any delay.”

It was only last month that Pakistan’s Qandeel Baloch was a victim of honour killing. She was strangled by her brother who showed no remorse towards killing her as it was for their ‘family’s honour’.

Honour killings have been increasing in Pakistan and have become prominent in the UK in the last couple years. As a result many young girls are being killed under the pretext of maintaining their family’s respect and honour.