The most expensive Winter Olympics in history started off with a technical hitch but went on to deliver a colourful and spectacular opening ceremony in Sochi, Russia.

"The Olympics are about building bridges to bring people together. Embrace human diversity and unity."

On Friday 7th February, 2014, at the Fisht Olympic stadium in Sochi, billions of viewers around the world witnessed the opening ceremony of the Winter Olympic Games.

The most expensive Winter Olympics in history started off with a bang in one of the five purpose built stadiums for these games.

The ceremony saw more than 40 heads of state and delegations present, with over 2,000 performers taking part, and Russian pop duo Tatu providing the entertainment. Konstantin Ernst the producer of the show explained:

“We made a mental journey back into the history of Russia, bearing in mind that we would be working for billions of viewers across the globe and we want them to experience this love of Russia.” 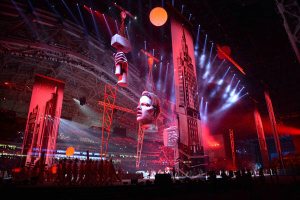 The organisers were hoping for no hitches but as 40,000 spectators packed into the stadium and millions watched globally, a technical hitch meant that one of the five snowflakes suspended from the ceiling failed to turn into the Olympic ring leaving four rings and a flower.

But as they say, the show must go on and this show continued in spectacular style.

The ceremony began with words associated with the Winter Olympics for each letter of the 31 Cyrillic alphabets. It then showed an 11-year-old performer flying through the skies as she viewed the Winter Olympics from her own magical and fantastical perspective. She flew through nine different landscapes afloat in the arena.

A map of the world was projected onto the floor showing all the participating nations as the athletes came out bearing flags through a door in the middle of the map.

Greece were the first to emerge from the door followed by each nation in extravagant costumes. Germany get Gold for the best kit which consisted of yellow, green and blue jackets teamed with orange, rose-print trousers for the women, and off-white for the men. 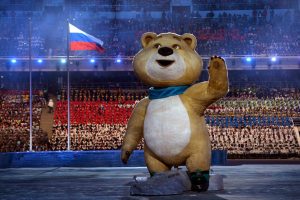 The atmosphere changed dramatically as the host nation came out, the volume to Daft Punk’s ‘Harder, Better, Faster, Stronger’ (2001) was raised and the stadium lit up with the spectators going crazy.

Boxer Nikolay Valuev, ballet dancer Sverlana Zakharova, six time speed skating champion Lidiya Skoblikova and tennis star Maria Sharapova, who grew up in Sochi were amongst some of the famous faces involved in the opening ceremony, carrying the Olympic torch or flag.

After the parade a video was shown depicting Russia through the ages followed by a performance that featured a massive glowing depiction of the Troika, a carriage pulled along by three horses that symbolises the Russian soul.

The floor of the stadium was then transformed into a raging sea depicting the reign of former emperor Peter the Great during the era of Imperial Russia. A tribute to iconic author, Leo Tolstoy’s War and Peace (1869) proceeded before the Olympic torch ceremony.

This led to the Olympic torch relay and the honour of lighting the cauldron went to rhythmic gymnast Alina Kabayeva, and wrestler Aleksandr Karelin. 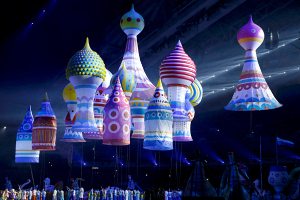 International Olympic Committee (IOC) president, Thomas Bach, used his welcome speech at the ceremony to promote Olympic values of diversity and non-discrimination: “The Olympics are about building bridges to bring people together. They are not about erecting walls to keep people apart. Embrace human diversity and unity.”

Some nations like Nepal, Pakistan and Mexico have only sent one competitor each whilst the United States have a team consisting of 230 athletes, the largest in the history of the Olympic Games.

Jamaica have sent a two man Bobsleigh team, their first representatives since the 2002 Winter Olympics and this will no doubt bring back fond memories for many people of the 1993 film, Cool Runnings, although they got off to a rough start as their luggage was lost on route to Russia.

The most successful nation in Winter Olympic history, with a population of just under five million people, is the Winter Sports-mad nation Norway. They have won an astonishing 306 medals with a third of those medals being Gold. They have covered virtually all the Winter Sports winning medals in figure Skating, Biathlon, Shooting and Speed Skating to name a few.

35 year-old British born professional violinist Vanessa May will be representing Thailand in Alpine Skiing. Team GB’s strong contingent of 56 athletes was led out into the stadium by the countries elected flag-bearer, Jon Eley. The 29-year- old Short track speed skater said: “It’s an amazing privilege and a moment that I’ll treasure for the rest of my life.”

Amongst the many billions of spectators around the world were the Indians who embarrassingly had to endure watching their three man contingent emerge into the stadium without the national flag of India, walking behind the IOC flag instead.

With the Indian Olympic Association (IOA) suspended by IOC due to ethical and administrative reasons, the Indian athletes will compete under the independent athletes’ category.

Russia will be hosting the Olympics for the first time since 1980 and have spent almost £600 million on winter sport since winning the rights to host the games seven years ago. 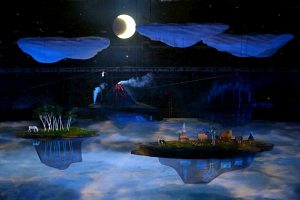 The Russian athletes will be under immense pressure to surpass the embarrassing haul of fifteen medals (three gold, five silver and seven bronze) won at the 2010 Winter Olympic Games in Vancouver, which resulted in finishing 11th position in the overall medals table.

Meanwhile, tensions are still rising in Sochi amidst a terrorist strike. A flight from Ukraine was forced to make an emergency landing after a passenger tried to hijack the plane and divert it to Sochi. Officials said the passenger tried to unsuccessfully gain access to the cockpit and a fighter jet was deployed to force the Boeing 737-800 to land.

Russia has spent almost £31 billion staging these games and with a lavish opening ceremony out of the way with a minor hitch will that be enough to please the public?

Twitter went into meltdown with quotes such as: “£30 Billion and they couldn’t even get the rings right!”, while another added: “Oops. Malfunction! One of the massive Olympic doilies is broke. Someone must pay!” People will never forget minor hitches especially when billions are spent.

But the race for the Winter Olympic medals has officially started and Russia will be praying it has spent its money well.

Sid is a passionate about Sports, Music and TV. He eats, lives and breathes football. He loves spending time with his family which include 3 boys. His motto is "Follow your heart and live the dream."
No India at Winter Olympics 2014
Premier League Football 2013/2014 Week 23