British Paralympic powerlifter Ali Jawad has revealed that being in lockdown has given him a second chance at glory.

Paralympian Ali Jawad has stated that the lockdown has provided him with a second chance at glory.

The powerlifter was born without both his legs and in 2009, he was diagnosed with Crohn’s disease. Nevertheless, he went on to win silver at the Rio Paralympics in 2016.

However, the illness began to take a toll on Ali’s body even with medication.

He exclusively told The Independent: “My body would breakdown every six to eight weeks.

“There’s been no consistency.”

Ali has torn his pectorals several times in the space of three years despite having had no previous history of the injury. As a result, training and competition has been compromised.

Though he was in contention to qualify for the Paralympics with a top-eight ranking, he was not hopeful.

“My ranking wasn’t safe. If I had dropped out of the eight, I wouldn’t have been in a fit enough state to reclaim my spot. Even if I had made it, I would have probably come last.”

Ali was set to undergo a revolutionary stem cell trial involving aggressive chemotherapy at the start of 2021. It would mean a long recovery period and would also mean he would have missed the rescheduled Paralympic Games.

However, when it was confirmed that the Games would be postponed in 2020, Ali was told his trial was also cancelled but he saw it as a positive.

“I was sat there getting the news and I realised, here was my second chance.

“Here was my chance to make up the ground I’ve lost in the last three years.

“I looked around and realised how I had organised my life was perfectly geared up for a push towards 2021.” 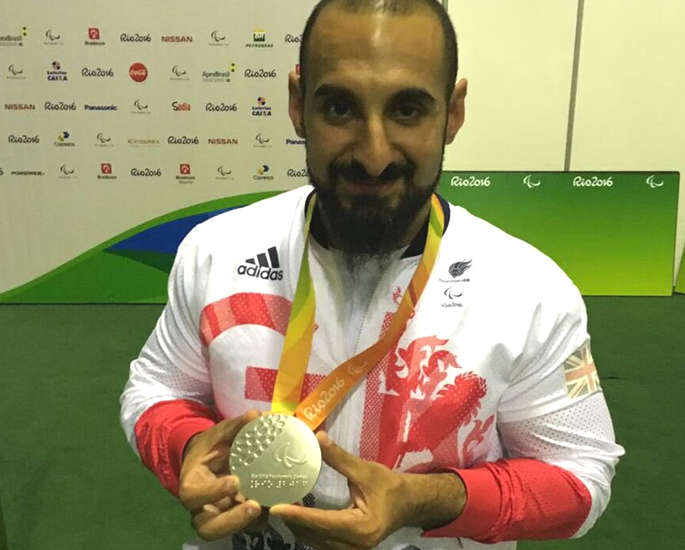 During the first UK lockdown in March 2020, Ali was based at the national training centre in Loughborough.

He had access to equipment from British Weightlifting, he did his shopping online and studied remotely for his PhD on anti-doping in Paralympic sport.

Ali Jawad realised that he would have to live this way for the rest of the year to give himself the best chance of Paralympic glory.

“When the first lockdown was announced, I got a phone call from my mum saying ‘Right, come home’ to London.

“I was like ‘Nope!’ I told her I’ve got to use this five-to-six months, even a whole year, to give myself the best foundation to come out of this and really attack next summer now.

“Because of my Crohn’s, I can’t take a risk with anybody from London. And it’s a risk to get to London as well – three hours away!

“They understood eventually but it took a lot of convincing. They know I’ve got a goal so big that I’m going to have to make that kind of sacrifice.

“I couldn’t take the path that I had taken just to go home at that point.”

While his current set-up is intensive, it does not faze him.

“I think I adapt to things well. Because I was used to self-isolating anyway for the last two years.”

“I had things in place to live like this. Even my diet, it’s so specialised I have to be extra careful, so I’m the best when it comes to preparing my own food.

“I’ve been educating myself on being a better, healthier baker.”

More time means Ali no longer has to push himself to lift heavier weights, which contributed to an increase in injuries.

His training focuses on the velocity of movement and repetition. It is designed to ensure he is primed to lift heavy in competition.

There are set to be events in March and June 2021 which contribute towards ranking points in the UK and Dubai, however, the dates have not been confirmed.

Ali Jawad believes that lifting over 170kg will be enough to guarantee his spot at his third and final Games.

This stage tends to be a single event shootout to determine which eight qualify.

Despite the positivity, Ali is aware that maintaining his drive during the pandemic may give him an advantage over those who may struggle during lockdown comes in the same light that others will have used the time to better themselves.

He said: “I’m not the best in my class. But I think because I’ve had such a good couple of lockdowns I’ve bridged that gap between the best guys and me.”

The athlete revealed that he is not doing it for himself.

“I’ll probably never get back to the Ali of Rio.

“I’d never have been able to achieve anything I had done without the team around me. These are things a normal person wouldn’t think of going for.

“I’ve accepted my situation in life, and it’s about what is the best circumstance for everyone.

“The last four years I haven’t been the Ali of old. Not medalling, always sick. Next year I have a chance to repay that.”