"I hope that all your dreams come true"

The couple met at an event in New Dehli and they dated for five years before tying the knot in a traditional ceremony.

During their wedding ceremony, Babita and Vivek seized the opportunity to create awareness for those who have baby girls.

The additional phera was taken as a pledge to save, teach and let the girl child play. 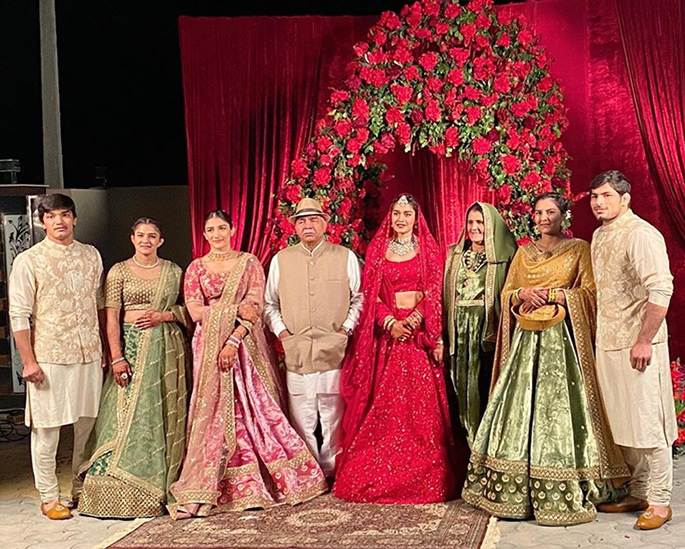 Babita Phogat followed in the steps of her cousin Vinesh who also recently got married and took this additional phera to raise awareness.

Despite Babita not sharing any photos from her big day, her elder sister, Geeta Phogat delighted fans with pictures on Twitter.

Geeta went on Twitter to congratulate Babita and Vivek. She posted:

“My lovely sister @BabitaPhogat. Congratulations on your marriage. I hope that all your dreams come true as you begin this new journey. 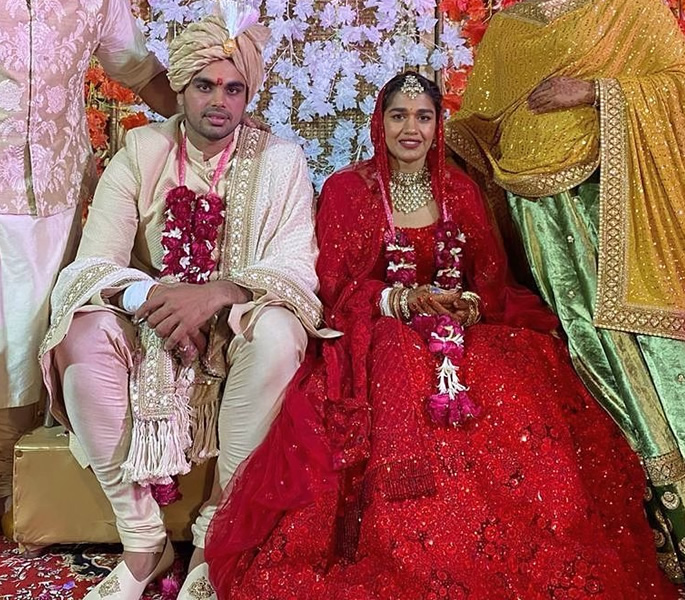 Babita looked stunning in a lavish red lehenga. The blouse entailed intricate monochrome detailing throughout, which added dimension to the ensemble.

The design was carried down to a voluminous skirt, which enhanced the princess appeal of the lehenga.

The sheer red dupatta, which was draped over her one shoulder included matching embellishment on the border.

For her makeup, Babita Phogat went with dewy skin and a red lip.

Alongside Babita, Vivek looked dapper in a cream sherwani with a turban. The duo looked very stunning. 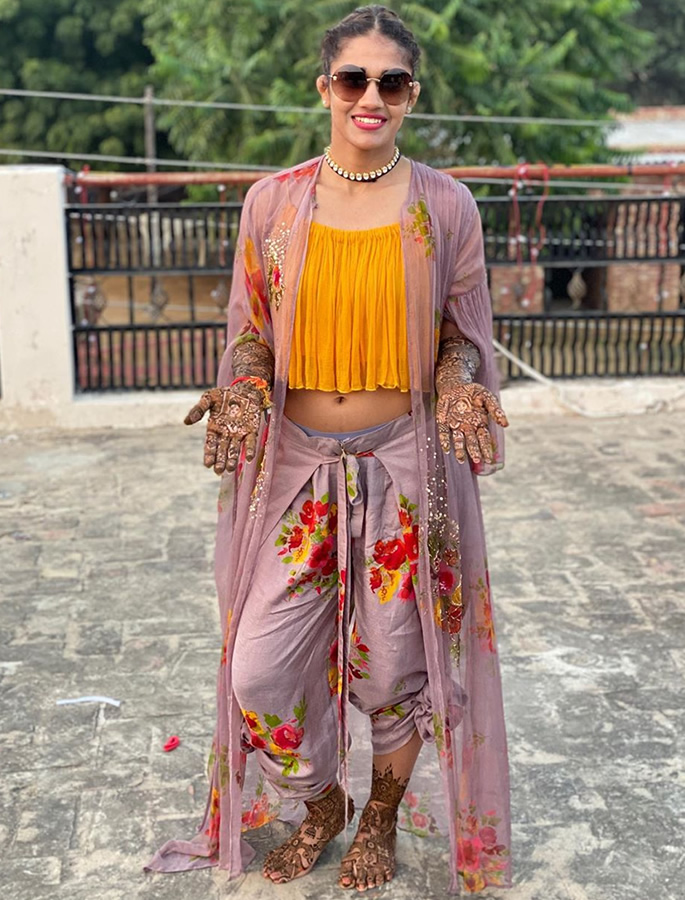 Before the wedding day, a photo of Babita was shared from her mehndi. She was be seen posing with her fresh mehndi design on her hands and feet.

She looked effortlessly chic in a beautiful floral cape worn with matching trousers and a yellow blouse.

Although he could not be a part of the wedding due to his busy work schedule in Chandigarh with his upcoming film Laal Singh Chaddha(2020), he tweeted:

“Dear @BabitaPhogat, wishing you and @SuhagVivek a happy, healthy and fulfilling marriage together. Love. a.”

Dear @BabitaPhogat, wishing you and @SuhagVivek a happy, healthy and fulfilling marriage together.
Love.
a.

Aamir Khan played Mahavir Singh Phogat in Nitesh Tiwari’s Dangal (2016). Dangal was loosely based on the Phogat sisters, which focused on the lives of Geeta and Babita.

The roles of the sisters were portrayed by Fatima Sana Shaikh as Geeta and Sanya Malhotra as Babita. The younger versions were played by Zaira Wasim and Suhani Bhatnagar respectively.

Despite not attending Babita’s wedding, Aamir was present at Geeta’s wedding in 2016.

He revealed how he wanted to gift Geeta her wedding lehenga but according to traditions, this was done by the bride’s maternal uncle. He said:

“I wanted to her the joda (outfit), but tradition doesn’t allow that. Only the bride’s mama (maternal uncle) can gift the shaadi ka joda (wedding outfit). So I got other gifts for her.”

We can assume that although Aamir was not present for Babita’s wedding day, he would have surely sent his love with gifts.

Babita Phogat and Vivek Suhag looked radiant during their wedding day and we wish the couple the best for their new journey ahead.

Ayesha is an English graduate with an aesthetic eye. Her fascination lies in sports, fashion and beauty. Also, she does not shy away from controversial subjects. Her motto is: “no two days are the same, that is what makes life worth living.”
South Asian Games 2019: Kathmandu and Pokhara
Top 20 Goals of Mohamed Salah for Liverpool FC