Vinesh Phogat is a multiple gold medalist wrestler from India. Having qualified for the 2020 Tokyo Olympics, we take a look back at her achievements.

"Vinesh is one of India's finest female wrestlers."

Top Indian wrestler Vinesh Phogat continues to evolve in the sport of wrestling, especially after brilliantly winning a bronze medal at the 2019 World Wrestling Championships in Kazakhstan.

With her third-place finish, she secured qualification for the 2020 Olympics in Tokyo.

Born on August 25, 1994, Vinesh was raised in Haryana, India. Vinesh comes from a strong wrestling background, with her cousins being Geeta Phogat and Babita Kumari.

Geeta and Babita are well known from the Bollywood film Dangal, as it follows their wrestling story. Vinesh has outperformed her cousins, making a name for herself internationally.

One of the protagonists from the film, Mahavir Singh Phogat, has been influential in training Vinesh.

Striving to be a global star, Vinesh won several gold medals during the early stages of her career. Ever since she made her Commonwealth Games debut in 2014 and winning gold, Vinesh has had a successful career.

She has featured in many international competitions, including the Asian Championships.

From strengthening her body up through the weight division and wrestling heavier opponents, she continuously improves.

With so many milestones, we look back at the greatest career achievements of Vinesh Phogat: 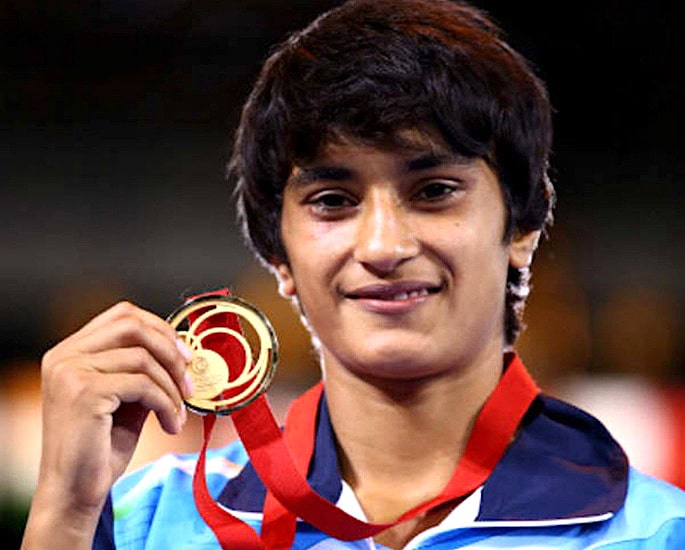 This event saw Vinesh Phogat claim her first gold medal and that too in emphatic fashion.

In the tournament, Vinesh took part in freestyle wrestling under the 48kg weight bracket division. In this style of event, wrestling an opponent to the ground tallies points up. As a result, the wrestler with the highest points wins.

At the age of nineteen, there were no real big expectations for her to perform on the biggest stage.

Although a match of this can include up to three-three minute rounds, Vinesh overcame a potentially tricky game with ease. She got past Nweke in the first two rounds, progressing to the semi-finals.

The last-four match saw Phogat take her wrestling ability to the next level. A dominant performance over Canadian wrestler Jasmine Mian, gave her an immense score of 12-1, over two rounds.

Advancing to the final, she faced a challenging test against England favourite Yana Rattigan.

In a highly intense match, Phogat was victorious in beating a strong competitor. The final score was 11-8 after a close encounter.

Phogat boldly made her statement at a young age, winning the gold medal at her debut games. 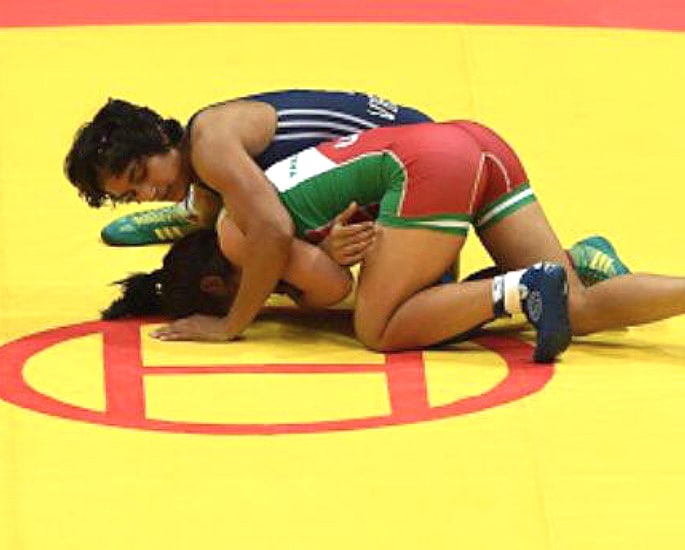 Following the success of the Commonwealth Games, Vinesh Phogat was hopeful of extending her winning run. A solid debut performance at the 2014 Asian Games earnt her a bronze medal.

As the Asian Games were being held in Incheon, South Korea, the competition for Vinesh was significantly different.

Having competed with European and African athletes at the 2014 Commonwealth Games, she was coming up against Asian wrestlers in Incheon.

After breezing past the last sixteen and the quarter-finals, Vinesh was facing Japanese wrestler Eri Tosaka in the semis.

Tosaka came into this bout with a world championship medal to her name back in 2012 and 2013. Unfortunately, the challenging match against Tosaka cost Vinesh dearly, demoting her into a third-place match.

Redeeming herself,  she registered a commanding victory over Mongolian wrestler Narangerel Eredenesukh.

Her brave attempts and determination led her to earn a deserved bronze medal, after wrestling the best Asian athletes. 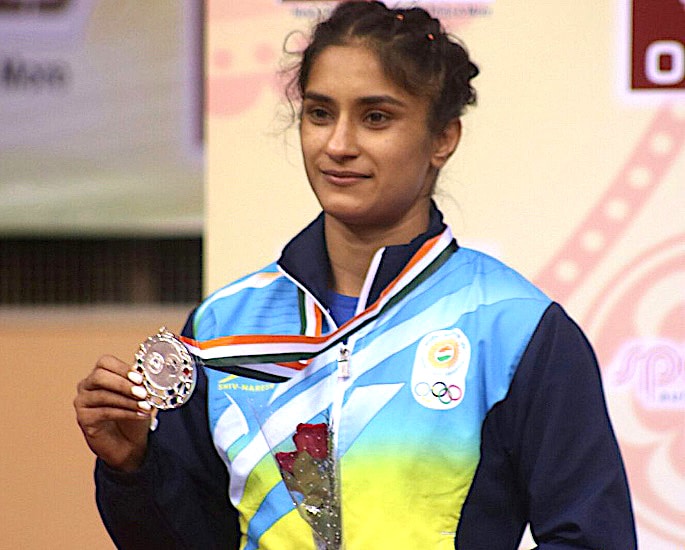 Vinesh Phogat fearlessly claimed a magnificent silver medal in the final of this tournament. New Delhi hosted the Asian Wrestling Championships from May 10-14, 2017.

Vinesh was eager to step up her game, after a career-threatening injury in the 2016 Olympics. After her recovery and rehabilitation process, she made a sensational return to this event.

Significantly, Vinesh was competing in the 55kg weight bracket, indicating a harder challenge on home turf.

Reflecting on the results, her return was very promising. She successfully went on to conquer the quarters and semi-final stages.

Vinesh thrashed Sevara Eshmuratova from Uzbekistan 10-1 in the semis, courtesy of a technical fall.

However, in the final, Vinesh was clearly struggling, especially when trailing four points to nil.

Despite Vinesh pulling back four points, Japanese wrestler Sae Nanjo was clinical in the latter stages of the battle.

“It is difficult to come back to the mat after having such a serious injury. But it was a good experience. I am happy with the silver as I know how difficult it is to stand on the podium after an injury.”

There was no doubt Vinesh gave a valiant effort and was going to reach new heights in future competitions. 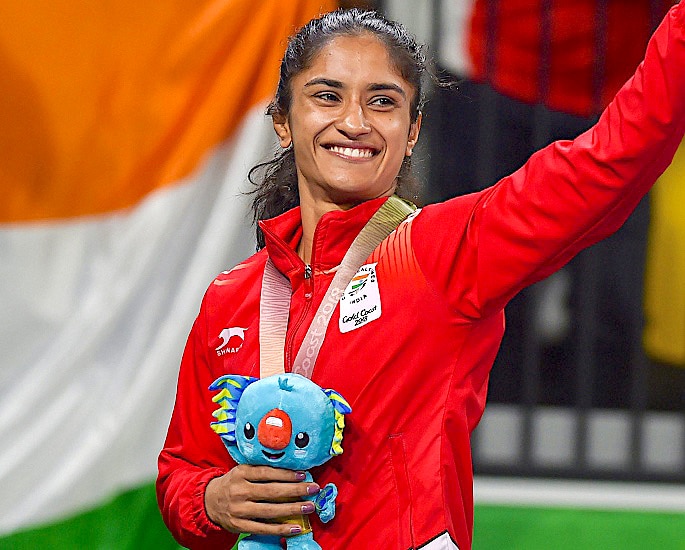 Vinesh was competing with three other challenges in the 50kg category.

After defeating her first two opponents, it was imminent she was going for gold. Her first-round win was very very tight, beating Nigerian wrestler Mercy Genesis, by six points to five.

However, a 10-0 whitewash victory over Rupinder Kaur (AUS) in the semi-final ensured her a final showdown with Canadian wrestler Jessica MacDonald.

In the final, viewers got to see the superior strength of Vinesh, especially when using her shoulders. Consequently, Vinesh won by a massive margin of 13-3.

After the game, Geeta spoke to First Post, applauding her cousin Vinesh as she said:

“She played like she was telling her opponent – This is my gold medal. Vinesh is one of India’s finest female wrestlers.”

Without a shadow of a doubt, Vinesh was heroic in her approach. Her competitiveness throughout the competition was also truly gripping. 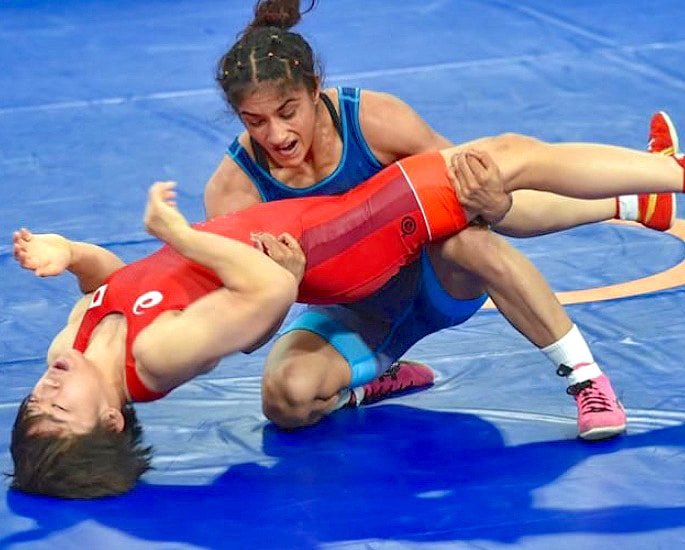 In Jakarta, Indonesia, Vinesh Phoghat made history as she became the first Indian female wrestler to win gold at the Asian Games.

With this gold triumph, Vinesh had proven that she was at the peak of her career. Vinesh went to Jakarta, counting on her previous experience, particularly the bronze she had won at the 2014 Asian Games.

Prior to this tournament, Vinesh had a chat with the principal sponsor for the Wrestling Federation of India (WFI, mentioning the benefits of experience:

“Now, I have experience on my side, I would want to make full use of that. I will give my best to change the colour of the medal that I win, preferably gold, as there’s nothing that exceeds gold.”

With eleven competitors from eleven nations, wrestling fans were about to witness a class act from Phogat.

It turned out to be an easy journey for Vinesh right from the last sixteen round. She took two clean sweep victories in the quarter-finals and semi-finals.

She then came up against Japanese wrestler Yuki Irie, who gave her more of a test in the final. After losing to Eri Tosaka in 2014, she did not disappoint.

Vinesh registered a comfortable win, scoring 6-2 in the final.

She deservedly got her first gold medal at the Asian Games. 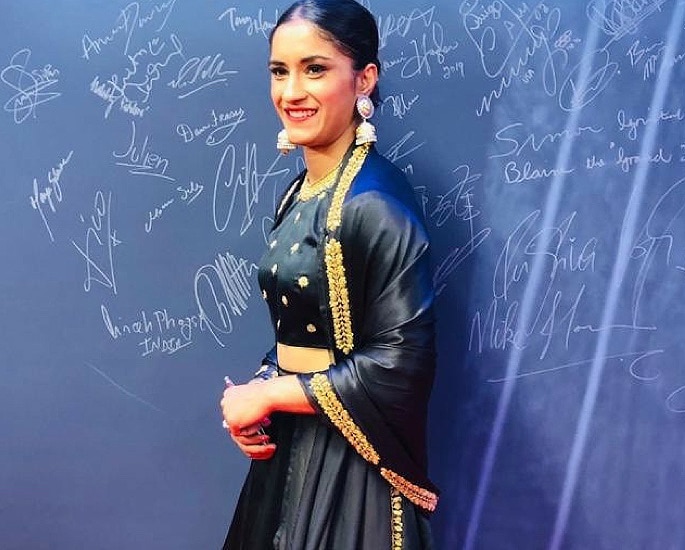 In 2019, a nomination for a Laureus Award put Vinesh Phogat on the world map.

The Laureus Awards recognises well-established athletes from around the world, with the winners receiving honorary awards for their work.

The annual awards ceremony have also been described as the ‘Oscars’ for sporting achievements.

In the case of Vinesh, an Olympics dream soon became a nightmare in 2016. Following the excitement of qualifying for the 2016 Olympics in Rio de Janeiro, her wishes were cut short.

A painful knee dislocation at the Olympics cost her dearly, resulting in nursing her leg for eight months. However, upon her return, the countless medals she won during international events were noticed on a universal level.

As a result, Vinesh created history when she became the first Indian athlete to be nominated at the 2019 Laureus Awards. She was amongst the nominees for the ‘Comeback of the Year Award.’

Speaking to IANS, she expressed her feelings about the nomination saying:

“It’s a matter of great pride for me to be nominated for such a prestigious award. Earlier, I had never heard of this award, but now that I have come to know of it, I feel very proud to be nominated among all-time greats.”

Despite losing to golf icon Tiger Woods, being nominated was still a huge achievement. The nomination has expanded more awareness about her accomplishment in wrestling.

Additionally, her great fightback following a major injury is a very inspiring story for others. 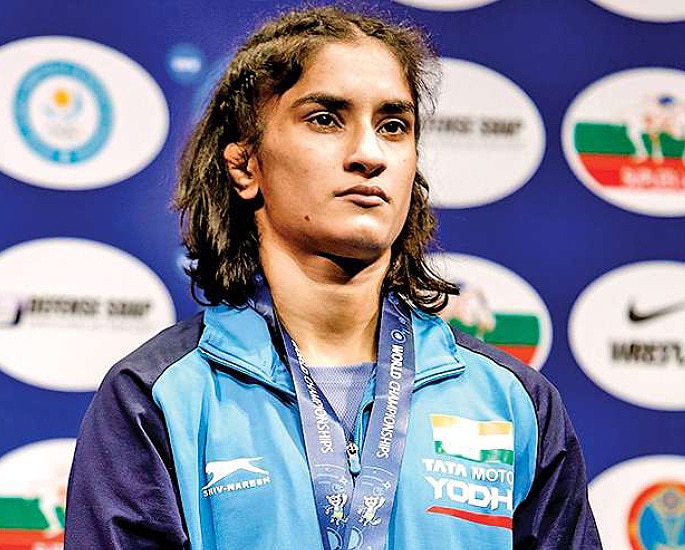 The outcome of this championship was yet again positive for Vinesh Phogat, claiming a bronze medal. The World Wrestling Championships took place in Nur-Sultan, Kazakhstan between September 17-18, 2019.

For all the competitors, including Vinesh, the stakes were high. A medal in Kazakhastan was going to guarantee a place at the 2020 Tokyo Olympics.

The other motivating factor for Vinesh was to win her first medal at the world championships. She participated in the women’s 53kg competition.

A strong display by Vinesh against number one female wrestler Sarah Hilderbrandt (USA) gave her the win.

Therefore, with this bronze medal, she will participate in the 2020 Tokyo Olympics. Ecstatic in claiming third place, she went on Instagram to express her emotions:

“Finally the wait has finished and the journey has begun! What was left unfinished in Rio, the journey to retake it in Tokyo has begun strongly with this medal.”

“All of this wouldn’t have been possible without the constant and generous support from my sponsors, my family, coach Akos Woller, physio Rucha Kashalkar.

“Thank you to everyone for their amazing support, motivation, and love.”

Interestingly, she is only the fourth Indian female wrestler to claim a medal at the world championships.

As Vinesh Phogat looks to progress further in the 2020 Olympics, she has become a global female athlete.

Many believe she has already achieved more than her famous cousins Geeta Phogat and Babita Kumari.

Her strong-minded demeanor is evident. The physical strength speaks volumes on the wrestling mat, but successfully returning from a serious injury shows Vinesh Phogat is a sporting star of the highest calibre.