"The way they played and bounced back into the tournament to clinch the bronze is amazing."

With no medals won for the nation since 2012, bronze was a very appealing prize.

India scored both of their goals through field strikes. They came from Nikkin Thimmaiah in the tenth minute and Satbir Singh in the 22nd minute.

They struggled on penalty corners and the opposition was able to convert two of seven to take the match into a shoot-out (You Hyo-sik in 20th, and Nam Hyun-woo in 29th).

In the sixth minute of the opening quarter, India had the first look at the goal and Akashdeep Singh shot wide. 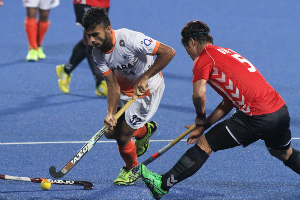 Korea then won a penalty corner, but could not get past the defence of the on-form goalkeeper, PR Sreejesh.

A minute later, India swooped into the lead with a shot from Nikkin at close range.

Into the second quarter, Korea scored from a rebound off a penalty corner.

India managed to restore the lead after a Satbir-Singh one two. But a foul by Ramandeep Singh resulted in India losing a man, allowing Korea to pile on the pressure.

In the second half, shots were fired from the left, right and centre. However, the Indian defence did enough to hold off the Koreans and took the match to a shoot-out.

After the match, skipper Sardar Singh congratulated his team and thanked his support staff and fans for their support on social media.

India’s new coach, Paul van Ass, was surprised with the way his team came back to win third position.

He said: “The shoot-out was very good. That was of high quality, but I feel the match was not of very high quality. We were a little bit slippery to start with. 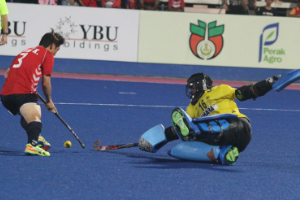 He continued: “But fortunately we hung in and I am glad that we could win in the shoot-out. I was very surprised with the quality of our shoot-out I must say.”

He said: “I am proud of this team. The way they played and bounced back into the tournament to clinch the bronze is amazing.

“The highlight was the win against Australia and this motivated them for the match against Korea. I congratulate the entire team for the bronze.”

India’s victory over Korea will inject confidence into Paul van Ass’s new leadership for future competitions and will hopefully assist India’s quest for their next champion title.