When it comes to alcohol-free beers, there is a variety out there to please different preferences. We look at 15 of the best to enjoy.

the brewery has been developing new techniques

In the last few years, alcohol-free beers have come a long way, giving those who don’t drink much more choice.

Before, there used to be a few lagers and the occasional imported ones where non-alcoholic beers are made.

Now, there are breweries which specifically make low or no-alcohol beers. This includes mainstream companies.

Many of the non-alcoholic options are high quality, offering different aromas and flavour profiles, some of which rival their alcoholic equivalent.

Some of the beers are completely alcohol-free while others come in at 0.5% alcohol by volume (ABV) or less.

Drinks under 0.5% ABV will not make you drunk and have a similar percentage of alcohol as certain foods. So they’re fine if you do not drink.

Here are 15 of the best options to help you decide what ones to try next. 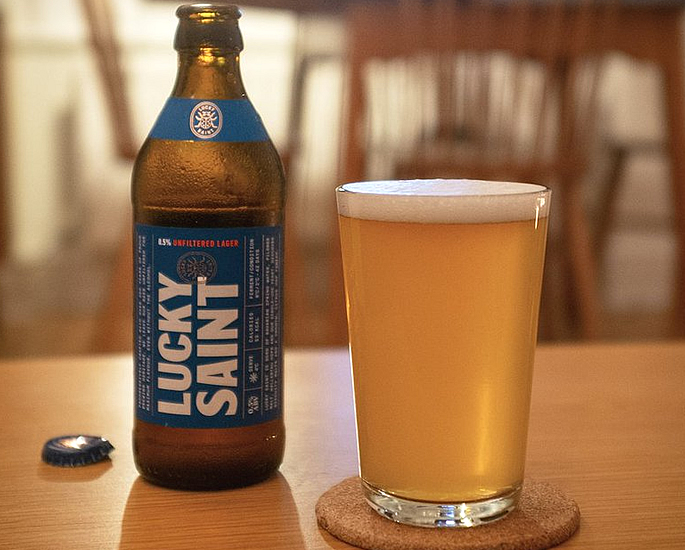 Lucky Saint is based in the UK but its lager is brewed in Germany.

This non-alcoholic lager is evidence that the brewery has been developing new techniques to produce a range of low-alcohol products.

It is a hazy, unfiltered lager with a honey-sweetened malt aroma.

While it has a fruity and malty flavour, the combination is quite complex and the actual taste is less sweet than many of its competitors.

This alcohol-free beer is freshened up with some zesty lemon and a spicy German lager bitterness. 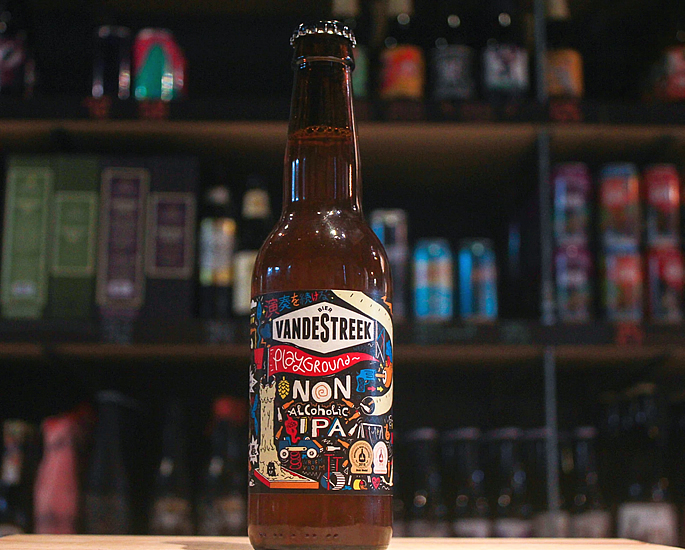 vandeStreek Playground IPA is a fantastic pale ale which is brewed in the Netherlands.

Like most modern IPAs, it has a hazy amber colour and possesses an enticing frothy head.

It is a thick-bodied drink that comes with a hint of sweetness followed by a balanced bitterness that leaves you wanting another sip.

A good amount of hops give it a tropical aroma, incorporating fruit and spice, with pine, coriander seed and oregano notes followed by subtle mango and lychee.

These characteristics create a beer so authentic that you forget that it has no alcohol. 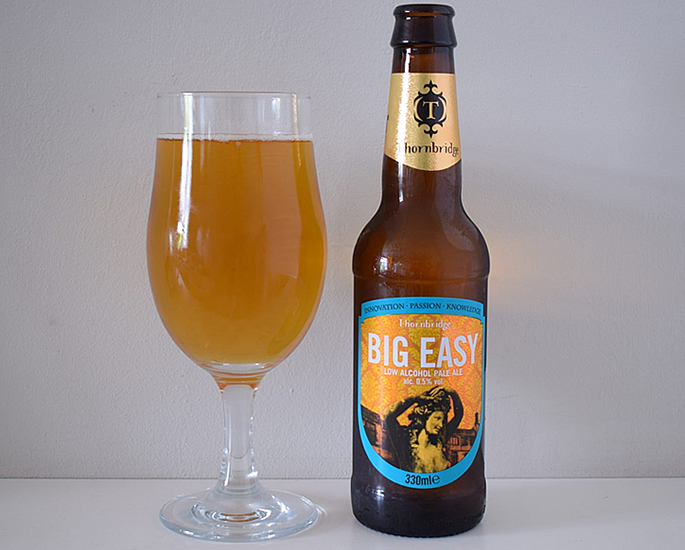 One problem with many alcohol-free beers is that they have the flavours which give away that it has little to no alcohol.

That is not a problem for Thornbridge and their alcohol-free beer, Big Easy, as it has peachy American hops.

Not too many hops have been added as its body is quite watery. By avoiding the hop overload, they work in proportion to the other ingredients.

The result is a weak beer but that is not a bad thing as the flavours are so fine-tuned that they work in sync with each other, making it an easy drink to enjoy. 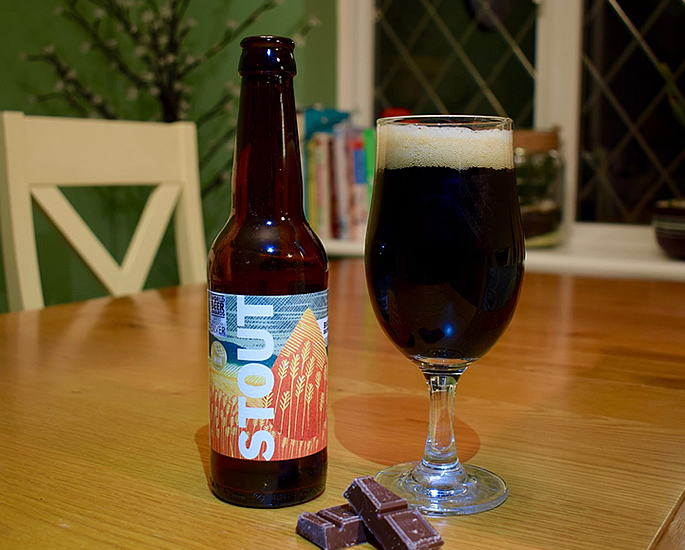 Those who don’t drink and are looking for a beer that is darker than a pale ale face a limited choice.

However, they will be happy to know that Big Drop has several. The brewery is known for making low-alcohol beers.

For those who prefer a dark beer, they can enjoy stout which is full of roasted malt flavours, with hints of coffee and chocolate.

It also has a milky sweetness that gives it more texture and a thick mouthfeel. This has all the elements of a great milk stout but without the alcohol.

This drink is perfect to enjoy after dinner or by the fire during the colder months. 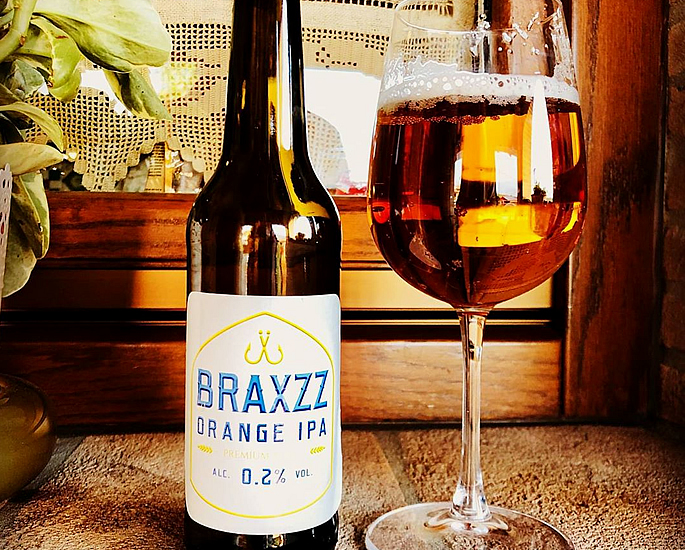 Braxzz Orange IPA is a low-alcohol fruit beer to try out at 0.2% ABV. It is the creation of innovative Anglo-Dutch company Braxzz.

The drink is inspired by the American IPA’s and is light in colour with a full-bodied hop profile, without it being too bitter in its aftertaste.

The orange flavours have a tropical quality, similar to something you might expect from a can of tropical fruit pop.

There are fruity notes like grapefruit along with fresh wheat elements and herbaceous elements.

One thing to note is that there is some bitterness which makes you forget that it is an alcohol-free beverage.

It may not be to everyone’s taste but many will enjoy the fruity flavours. 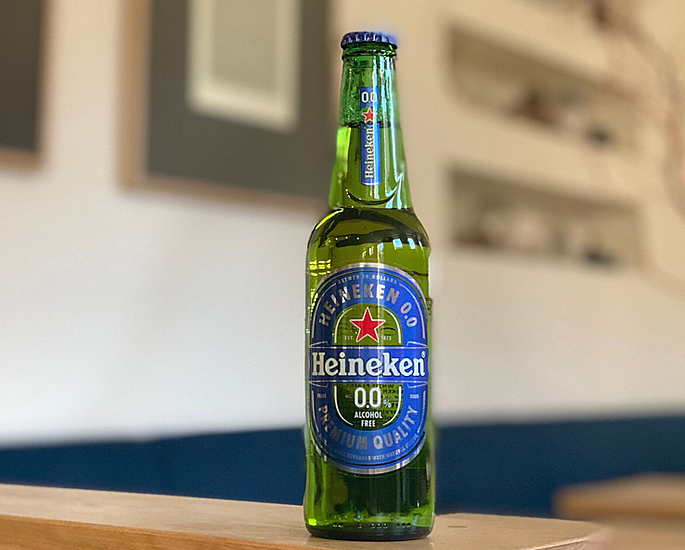 Heineken 0.0% has a lot of similarities to the regular Heineken beer, both in flavour and aroma.

This makes it an easy-going and light drink suitable for any occasion.

It has muted beer flavours, with some sweet malt and a trace of bitter lemon hops but it is not an issue when you consider that it is alcohol-free.

Heineken 0.0% has a fresh, crispy aroma like the full-strength version.

When drinking it, it has similarities to a typical mass-produced pale lager, however, one giveaway of it being alcohol-free is that it is a little syrupy.

Nevertheless, it is a booze less beverage to enjoy. 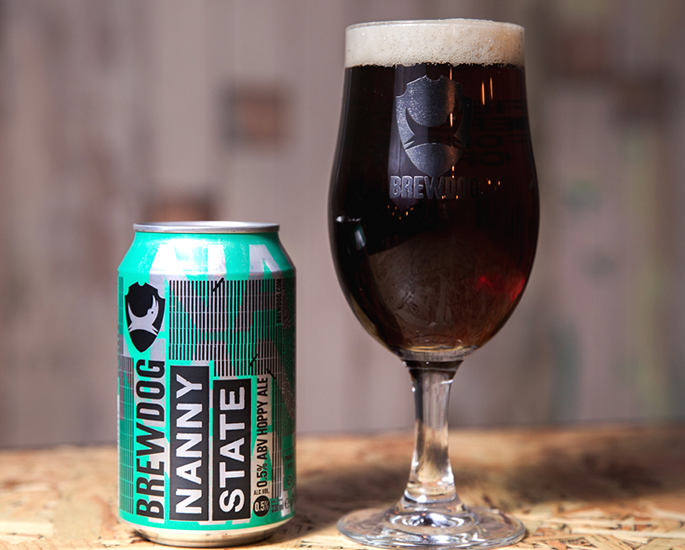 Brewdog Nanny State was originally a 1.1% beer which went under the radar when it was first released. It was launched after Brewdog made headlines over its high-strength beers.

Brewdog ended up being one of the first modern breweries to take low-alcohol beers seriously.

Nanny State, which is widely available and now has 0.5% ABV, is a red-coloured drink which uses five hop varieties and eight types of malt to achieve the characteristics you would expect from a higher-strength beer.

It is loaded with citrus flavours and a pine-like bitterness.

Compared to stronger pale ales, it is a little thin and drier. This prevents the hop flavours from showing off the full fruity potential but it does not lack in quality. 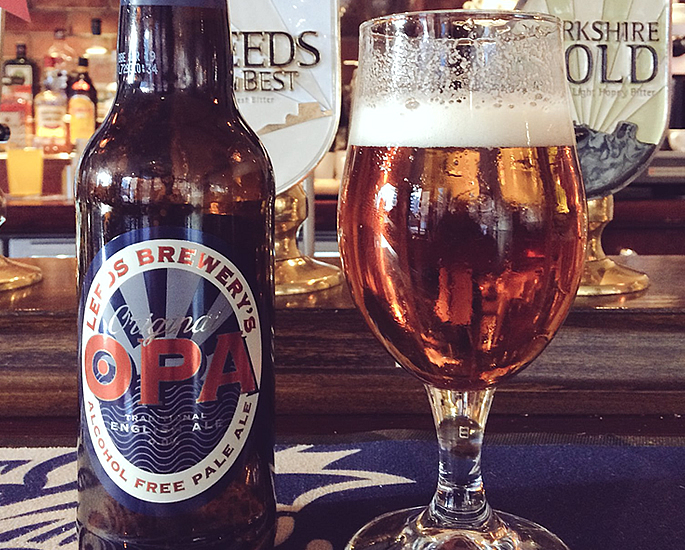 This alcohol-free beer is described by Leeds Brewery as a “traditional English ale”.

When the bottle is opened, there is hardly any aroma but after a short while, the aromas begin to tease through. There is a little tropical fruit and caramel malt.

More of the aroma is released as you start drinking.

The main flavour profile is caramel but it is not too sweet like other alcohol-free options.

The flavour pairs well with the dry, bitter finish. Not only does it stop you from drinking it too quickly, but it also gives you the feeling that you have been drinking a higher-strength beer.

Mikkeller, Henry and His Science 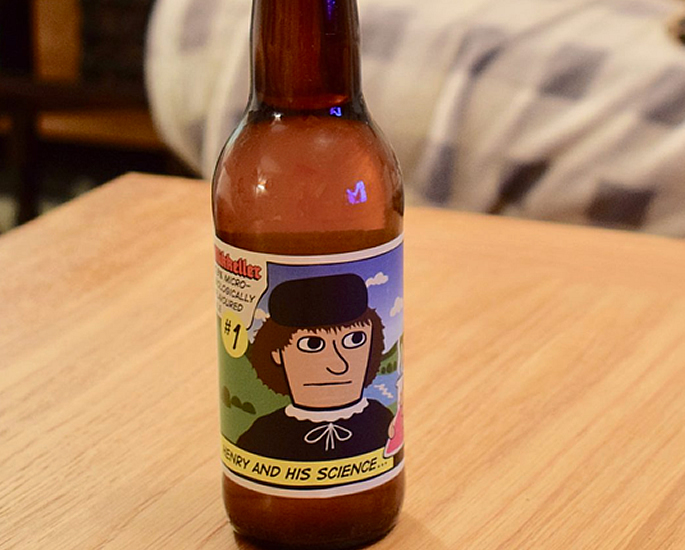 This more obscure brewery has developed its own unique way of producing alcohol-free beers. It is called “Flemish Primitive”.

It involves using a neutral Pilsner malt and hops that have low aroma profiles.

This is so it can allow its own specially created yeast named ‘mikkellensis’ to provide most of the aroma and flavouring.

This beer is a fruity drink that has a subtle sour lemon flavour with an almost savoury finish.

Its characteristics are more like a shandy but this unique drink is refreshing and a great option for anyone looking for a beer alternative with a difference. 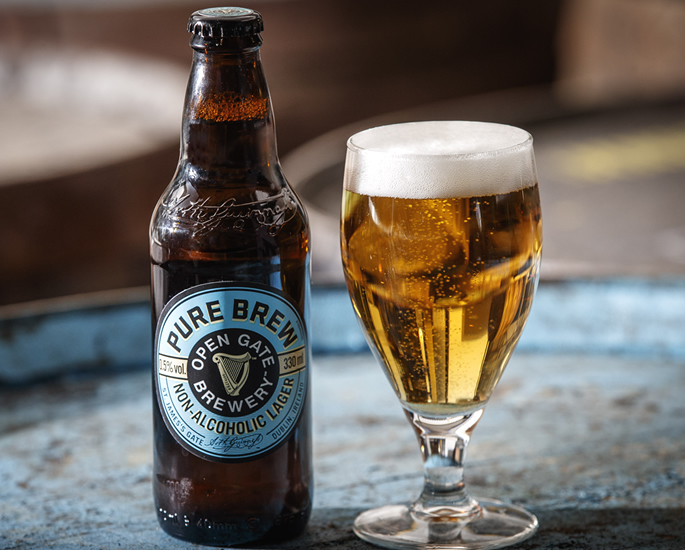 This lager was launched in 2018 and it is the second non-alcoholic beer made by Guinness after Kaliber.

Pure Brew has a clear, amber colour when pouring and it creates a moderate head of foam.

It initially has a simple aroma dominated by pale malts. This is soon joined by lemon and grapefruit.

Grapefruit is the main flavour which may become overwhelming but the pale malts balance it out.

It is a heavy-bodied drink but it is smooth as you drink it.

The more you drink, a balanced bitterness grows, even featuring a hint of soapiness near the end. 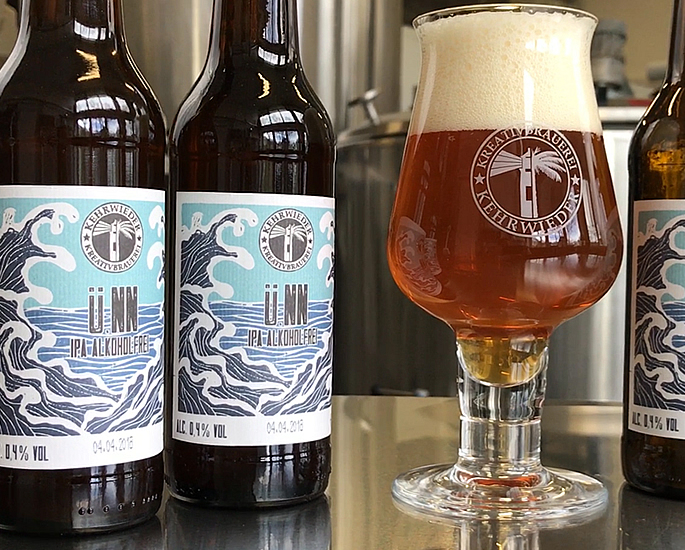 This IPA was first developed in 2015 and it takes a different method when getting rid of the alcohol. Instead of removing the alcohol after fermentation, a yeast is used that stops fermentation early.

The aroma is enhanced by dry-hopping after fermentation. Additional Simcoe and Mosaic hops are used.

ü.NN pours a hazy, deep orange colour with a foamy head that looks very appealing in the glass.

As soon as it is poured, the smells of wood, grass and citrus entice the tastebuds.

The first sip may taste bitter but the sweet maltiness balances it out. Flavour notes include pine, mandarin and lime.

As it is an unfiltered beer, the mouthful is thick but it has a smooth finish with a slight bitterness at the end. 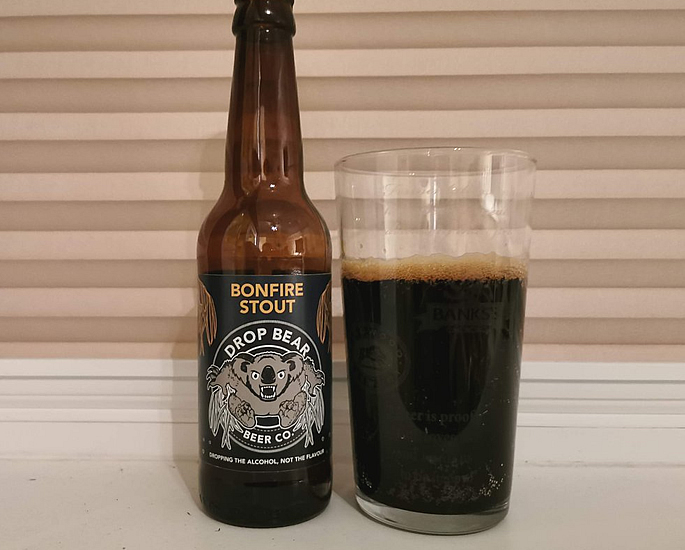 Bonfire Stout has a complex mix of grains. It has smoked malt alongside Double Roasted Crystal Malt, Chocolate Malt, Caramalt and wheat malt with some barley and flaked oats.

Not only is it alcohol-free but it has no lactose, meaning it is suitable for vegans.

It has a dark ruby colour with a little toffee-coloured foam.

Bonfire Stout has a smoky aroma but it is not overpowering as there is some cocoa, liquorice, chocolate, coffee, oak and pine and subtle grapefruit.

The range of smells complements each other well.

In terms of flavour, smoky, roasted malts lead the way. They balance well with espresso coffee, oat and dark chocolate.

It has a woody aftertaste, which balances well with a little sweetness from the chocolatey flavours and a touch of acidity. 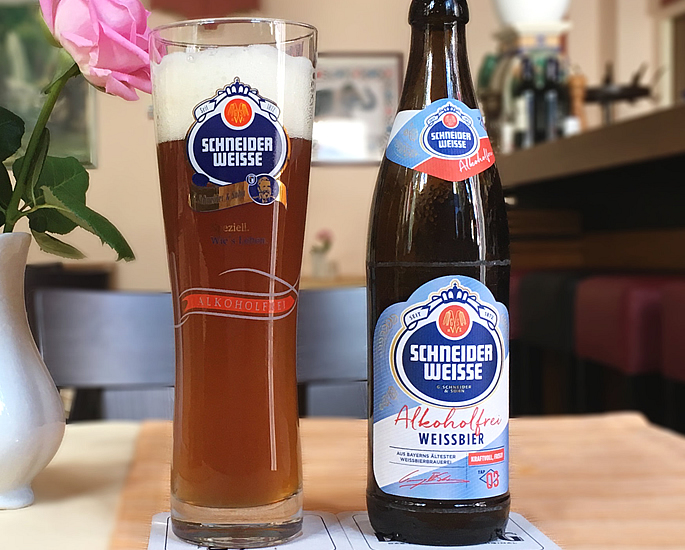 This non-alcoholic wheat beer is one to pour into a glass, mainly because of the off-white head of foam that sits on top of the hazy beer.

Darker barley malt is what gives this beverage its signature dark colour.

The initial aroma is also more characteristic of a non-wheat beer, but the unmistakable sweet, cereal-like smell of the wheat soon becomes prevalent.

It is heavily carbonated but it is smooth rather than fizzy.

In terms of flavour, there is no barley maltiness, only the sweet cereal taste of the wheat with hints of green banana.

The taste starts off bitter but it starts to combine with the sweetness as the bubbles lessen. It is a balanced drink with a dry finish and a hint of bitterness in the aftertaste. 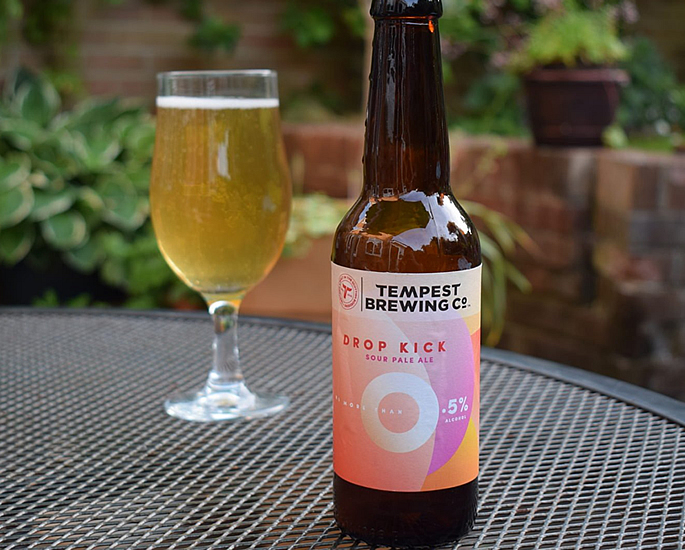 Drop Kick 0.5% is a sour pale ale that pours a clear straw colour.

It’s highly carbonated on opening, so it produces a big head if you don’t angle the glass correctly when pouring.

It soon settles though, leaving a double slither of foam showing that the dextrin and wheat is working on the head retention front.

The non-alcoholic drink has a complex and varied aroma. There are hints of elderflower and white vinegar. This is followed by lychee and grapefruit.

It may be light-bodied but the mouthfeel is surprisingly soft and creamy.

The flavour is initially fruity, with the mouth-watering acidity only coming out towards the end of each sip.

The fruit flavours still have a tropical theme but mango and pineapple tend to be tasted. This is alongside the same pale malt flavours from the aroma. 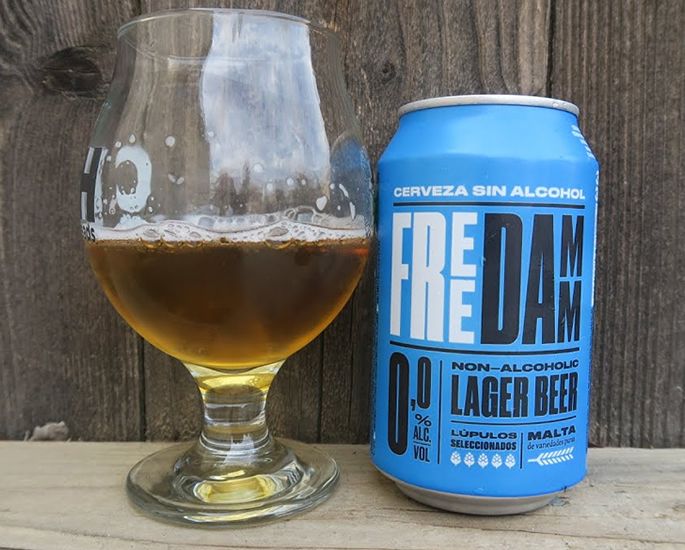 Barcelona brewery Damm are the creators behind this alcohol-free option.

Free Damm has a clear amber colour, as expected with most lagers. But it has a fluff of a head that you don’t normally see in a mass-produced beer.

There is a lot going on when it comes to the aroma. It leads with sweet light malts backed with grainy straw and lemon.

The body is good, with tight bubbles and maize offering some carbonation and a smooth mouthfeel.

The flavour is similar to the aroma, malty, musty and lemony with a hint of cereal.

There’s a bit more sweetness in the taste, backed with a hint of bitterness.

With so many varieties to choose from, you can enjoy drinking without actually drinking.

An important point is to read the labelling to ensure that there is absolutely no alcohol at all in the beer or whether it still may contain traces.

Hopefully, this guide provides you with information on what non-alcoholic beers to try out.

Dhiren is a journalism graduate with a passion for gaming, watching films and sports. He also enjoys cooking from time to time. His motto is to “Live life one day at a time.”
Indian Food to Make in 15 Minutes or Less
How to make Indian Takeaway Favourites at Home