Alcohol and social drinking is enjoyed by many British Asians. But with doctors worrying over rising obesity levels, is it time to have calorie content labels on alcoholic drinks?

"I think that the labels will certainly make people think twice before reaching for the next beer bottle."

Most of us British Asians like to have a drink now and then, whether its a quiet drink in the pub after work, at a family function, or during a night out on the town.

However, with the high level of alcohol consumption in the UK, along with two-thirds of people being classed as overweight, is it time to put calorie labels on alcoholic drinks?

The Royal Society for Public Health (RSPH) believe that there are too many people blissfully unaware of the high calorie content in alcoholic drinks, and just how many calories they are consuming with each drink.

The RSPH insist that in addition to labels on bottles, calorie information should be clearly displayed on beer mats, pumps in pubs and even on menus in restaurants. This is so that people can see just how much fat and sugar they are consuming.

Currently, the actual calorie figures for ordinary drinks may be surprising to many. Doctors say one unit of alcohol contains 56 calories, while a unit of alcopop can contain more than 150 calories, and a unit of four percent beer can have 80 calories. 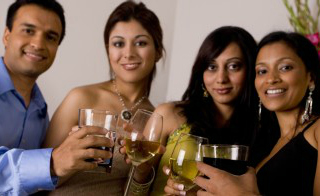 Also four pints of beer consumed during a night out is the equivalent of eating two and a half burgers.

It would take 73 minutes of running in order to burn the calories consumed in either drinking or eating the burgers.

Despite these shocking statistics, a survey by the RSPH consisting of more than 2,000 adults found that 90 percent were unaware of how many calories were in a pint of lager.

Drinking alcohol is something all communities do and the British Asian community is no different.

Along with the often heavy and fatty foods within Asian communities and the consumption of alcohol, British Asians also represent the two thirds of UK adults that are either overweight or obese.

Can the calories labels on alcoholic drinks help British-Asians from piling on the pounds when having a few drinks?

One drinker and student Harpreet believes so, she says: “I think that the labels will certainly make people think twice before reaching for the next beer bottle.” 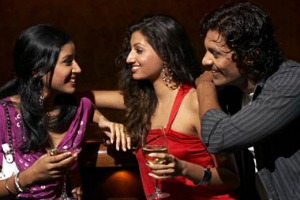 This belief was also echoed by another student Indie who said:

“It’s a good idea to have the labels, people will become more aware of the health issues associated with alcohol, other than the ones that people already know about such as liver damage.”

However, 30 year old Ajay disagrees: “We already see calorie diagrams on our food, why have it on our drinks as well? People shouldn’t be so health conscious.”

Ajay is not alone in not wanting the labels, 25 year old Rhia believes that:

“Girls already have so many things they are told they can and cannot eat in the worry of becoming fat, we don’t need to think the same about our drinks as well.”

Another British Asian, mother of 3, Sukhi says: “People are already being guilted into healthy eating by calorie indicators on food packaging, don’t guilt people to drink less by doing the same with alcohol.”

Despite the mixed opinions, officials from obesity charities and organisations believe that having calories labels on drinks can only be a good thing. Tam Fry, from the National Obesity Forum says: “A calorie-count on bottles can’t come soon enough.” 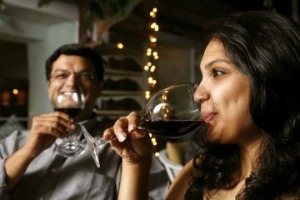 RSPH chief executive Shirley Cramer believes the calorie labels could be hugely beneficial in helping reduce the number of overweight people in the country: “It could help the nation’s waistlines as well as probably reduce alcohol consumption.”

The labels have already been tested in a pub by the RSPH, the customers who had been informed of how many calories their drink had contained drank 400 fewer calories in one session.

While there are health benefits in drinking less, is there a need to heavily persuade people by having the calorie information of the drinks?

People often drink in social situations to have fun, or to relieve stress after work, would they want to be reminded of how many calories they have just consumed with their drink?

Will people who drink feel they are being forced into drinking less by having the calorie labels? Or could this usher in a new age of calorie counting when it comes to drinking, the same way as people do with their food?

It seems that prior to the study into calories in alcoholic drinks, ignorance was truly bliss. People may now want to think twice before ordering their usual down at the pub.

Amarjit is a 1st class English Language graduate who enjoys gaming, football, travelling and flexing his creative muscles writing comedy sketches and scripts. His motto is “It’s never too late to be who you might have been” by George Eliot.
Why Pakoras are a Tasty Snack
Winners of the British Curry Awards 2014