Government plans to introduce the UK to healthier foods come in the form of traffic light labelling. DESIblitz takes a look at what this means to British Asian consumers.

The UK has been branded the ‘fattest nation in Europe’.

Ever head the phase: “You are what you eat”? Well this mantra is about to get louder. In June 2013, the government unveiled plans to introduce a consistent food labelling programme, in the form of traffic light labelling.

DESIblitz asks, is this about greater transparency from food manufacturers or are we freefalling further into a nanny state?

Diet and health go hand in hand. Yes, we all over indulge from time to time, but having a balanced diet has been proven to increase life expectancy. Chances are, if you eat rubbish food, you’re likely to feel just that – rubbish.

That’s not say that we don’t all partake in a spot of second or even third helpings now and again. The bottom line is, dieting and quick-fixes don’t work. What does make a difference is a diet overhaul. Eating food that is better for you. And it is this reworked mantra that has led the government to change their tactics towards healthy eating.

The idea behind the introduction of a new labelling system is that knowledge is power. The government wants food manufacturers to become transparent. They want to give us more digestible information to make better informed choices. But will this really reform our decisions? 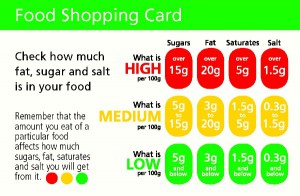 Weight related illnesses are increasing with worrying statistics. The UK has been branded the fattest nation in Europe, a title that is a little hard to swallow.

With widening waistbands and increasing pressure on the NHS, the government have responded by introducing a traffic light food rating system.

The new labels will use the red, amber and green symbols of the traffic light to visually represent the amount of fat, saturated fat, salt, sugars and calories present across pre-packaged food per 100g. The colours will correspond to whether a food is high, medium and low in a particular item.

The current Guideline Daily Allowance (GDA) system uses percentages to inform us of nutritional information. This system is far from user-friendly and the way food manufacturers use GDA is generally misleading. The new system is being introduced to allow different foods to be compared like for like at a glance. This change has been welcomed by key players such as Food Standards Agency.

“Clear, simple, consistent front-of-pack nutrition labelling has an important role to play in making it easier for people to eat healthily but it is no good doing this in isolation. It has got to be part of a wider Government strategy.” 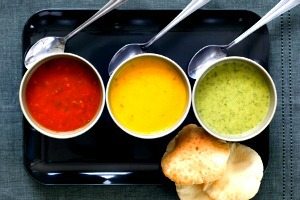 However, there is one teething problem that could be detrimental; sign up is voluntary. All the major supermarkets have agreed that they will introduce the new labelling immediately.

Big businesses like McCain, Mars and Nestle have also signed up. Unfortunately, even bigger business such as Cadburys and Coca Cola haven’t.

Worryingly, this means that it is likely only 60% of products will display the label. The government have explained that to make it compulsory will just take too long.

We may believe we know what’s good for us and that this new system is yet another waste of public money. However, foods advertised as being the healthy option aren’t always what they appear to be.

When a group of DESIblitz readers were asked whether cereal bars were much healthier than biscuits, the answer was a unanimous yes. However, a Which? investigation suggested that the health benefits of the cereal bar are a myth. They found cereal bars to be high in sugar, with one cereal bar containing more sugar than a can of cola. 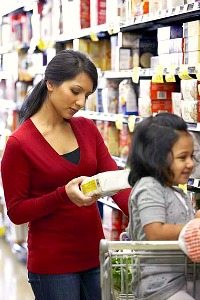 Critics have debated if the planned change to food labelling is the government trying to make decisions for us. Although, it’s likely that a large percentage of the population are simply uninterested in nutrition and changes to labels will not make a difference.

We eat to live. The current labels may be confusing, but will re-branding them change our relationship with food? While living in recession we don’t always have the luxury of buying fresh, healthy food.

The cheaper food is often unhealthy. If you had the choice between filling your family up or letting them eat meager amounts of ‘healthy’ food, what would you do?

Also with the major supermarkets signing up, what does this mean for local businesses? Without the same power or money behind them, will they be able to afford to implement such immense change?

Asian supermarkets have been renowned for bringing authentic ingredients to our plates; ingredients that can’t be sourced elsewhere. Raj, a shop owner from Birmingham said:

“I don’t think the new system will make a difference. People know what they like. People aren’t interested in packaging. It’s something we throw away.”

Making food manufacturers more transparent is positive as knowing what is in our food is important – especially after the recent horsemeat scandal. But what will this new labelling system do to reform our opinions?

Awareness is one step, but implementation is a whole different ball game. It’s clear the government need to do something and these new tactics are certainly food for thought. But whether it changes our decisions is yet to be seen.

Jacqueline is an English graduate who loves fashion and culture. She believes that the best way to learn about the world is to read and write about it. Her motto is “Logic will get you from A-Z. Imagination will get you everywhere.”
Nominations Open for English Curry Awards 2013
Food delights of Eid