In a shocking incident, an Indian traffic cop was forcibly driven on a car bonnet. The terrifying ordeal went on for two kilometres.

Sunil is seen desperately holding onto the bonnet

A shocking incident occurred in Delhi in which a traffic cop was dragged on a violator’s car bonnet for nearly two kilometres.

The officer, identified as Sunil had been doing his job when the incident took place.

It was reported that the incident happened in November 2019 but only went viral in February 2020, prompting officials to launch an investigation.

Officer Sunil had been working a security checkpoint in Delhi’s Nangloi Chowk where he was doing routine checkups of vehicles.

However, a vehicle was spotted coming from a different side. Officers including Sunil asked the driver to stop and show their documents.

The man indicated that he did not want to abide by the rules.

As Sunil told him not to go anywhere, the driver begins to turn his car around in an attempt to flee.

Sunil was determined not to let the man escape so he jumped on top of the bonnet.

However, shockingly, the man continues driving. He aggressively reversed before driving off. 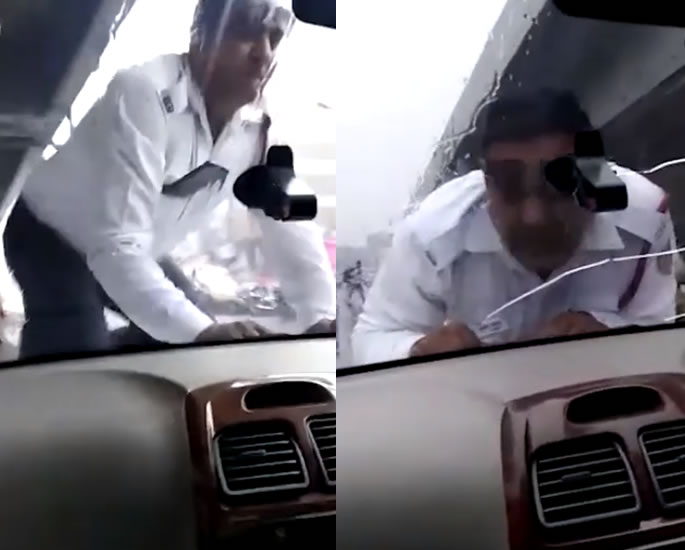 Eyewitnesses tried to stop the man from escaping but soon moved out of the way. Meanwhile, Sunil is seen desperately holding onto the bonnet while telling the driver to stop.

The driver continues speeding, beeping the horn and telling the traffic cop to get off the car.

At the same time, a crack develops in the windscreen, obscuring the driver’s visibility.

In the video, which was filmed by the passenger, the driver sways from side to side in an attempt to get Sunil off the car.

The incident continues for approximately two kilometres before the passenger convinces the driver to stop and let Sunil off.

While the driver continued to sway his vehicle at speed, continuous requests from passenger eventually led to the driver slowing down and telling Sunil to get off.

Witnesses were shocked by what they saw.

Despite his determination to stop the traffic violator, Sunil eventually got off the car and walked to the side. The driver then fled the scene.

According to officials, Sunil suffered minor injuries during the incident.

Even though the incident took place in November, the video went viral in February and it came to the attention of the police.

The video has prompted officers to investigate the matter as well as those who were involved.

Social media users described the video as something you would see in a film.

Watch the Shocking Video of the Traffic Officer 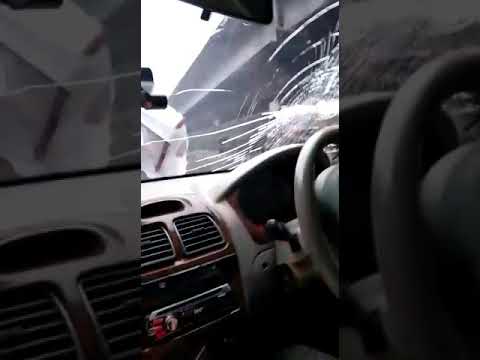 Dhiren is a journalism graduate with a passion for gaming, watching films and sports. He also enjoys cooking from time to time. His motto is to “Live life one day at a time.”
Pakistani Man Smuggled Heroin in Tea Bags into Dubai
Angry Indian Groom erupts into Fight at His Wedding