Why Pakoras are a Tasty Snack

Street food has been an integral part of Asian culture for decades and the hero of this street story has always been a hearty plate of pakoras. DESIblitz looks at why pakoras are a must have on one’s street food platter, and their many glorious varieties.

"I love my mom's paneer pakoras, I could eat 2 whole plates of them!"

The thing with street food, particularly in the South Asian region, is that it inadvertently becomes a staple diet for the people.

It has outmuscled the main course more frequently than expected and captures the undivided attention of foodies everywhere.

There is one type of street food that is the most popular and ticks all the boxes of being tasty, quick to eat, cheap and an overall delight, this is the pakora. Join DESIblitz as we look why pakoras are so tasty!

Pakoras or fritters are a deep fried snack whose origin can be backtracked to Uttar Pradesh, a northern state in India. 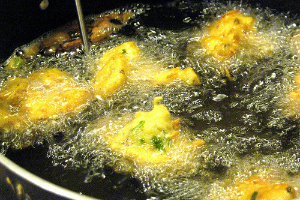 Derived from the ancient language of Sanskrit, ‘pakvavata’, better known today as pakora in India and Pakistan, is essentially a dollop of batter stuffed with a number of ingredients and deep fried until golden brown.

In the UK, rather than venturing out to streets, people prepare pakoras at home or buy them from shops and often serve with tea for guests.

They are also consumed as a starter at weddings. During festivals like Diwali, Eid and Vaisakhi, they are a quintessential snack gorged unreservedly by everyone present.

A traditional plate of pakoras consists of vegetarian variety in majority of parts. However, with an evolving taste and an insatiable urge to experiment with food, we now have over a dozen varieties of pakoras!

“I love Pakoras, they are so quick and easy to make and are really tasty!”

Let’s take a look at some of the varieties of pakoras which are famous in the South Asian region: 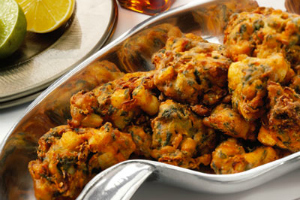 These are the classic pakoras, vegetarian pakoras are made with batter stuffed with various vegetables such as onion, potatoes, cabbage, eggplant, spinach and pretty much anything else you would like to throw in there.

They are deep fried and served usually with a mint or tamarind chutney and for the less adventurous, ketchup works just as well. 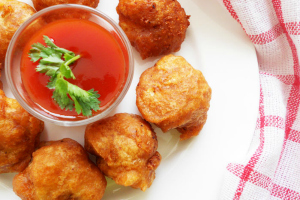 Gobi pakoras or cauliflower fritters are a standalone version of veggie pakoras and the preparation is pretty much the same.

A little twist that can be given to them is marinating them with spices prior to deep frying.

This adds a lot more taste to the whole experience. Again you can try them with mint or tamarind chutney. 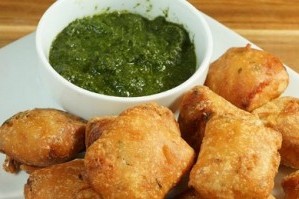 Made with Indian cottage cheese or paneer, this variety is tasty and tantalising! You can use raw paneer or a shallow fried one as stuffing in the batter.

Serve it with ketchup or a traditional slew of chutneys to enhance the taste. Another food-lover, Rishi says: “I love my mom’s paneer pakoras, I could eat 2 whole plates of them!” 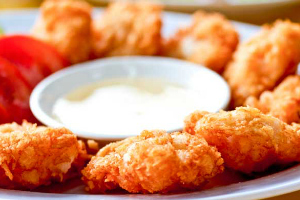 An indispensable add-on on the plates of people from Kolkata, fish pakoras capture the essence of South Indian culture perfectly.

You can use cod fillet and eggs for stuffing.

The usual corn flour and spices contribute for the batter.

DESIblitz insider tip: Forget the chutneys and try it with just some lemon juice and lemon zest! 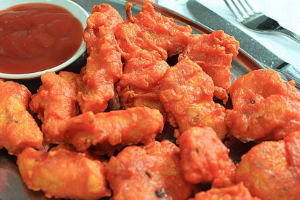 Always a popular choice among meat lovers, chicken pakoras are prepared by dipping marinated chicken in batter and deep frying them until they are golden brown.

They taste best with mint chutney and raw onions.

Now that the recipes have got your mouth watering, lets have a look at our secret chicken pakora recipe, perfect for you to whip up and try!

Pakoras are a staple for any and every South Asian around the world. A popular street food, they are so tasty, we just cannot resist them. With so many delightful varieties to choose from, you will be spoilt for choice. Tuck in!

Dreamer by day and a writer by night, Ankit is a foodie, music lover and an MMA junkie. His motto to strive towards success is “Life is too short to wallow in sadness, so love a lot, laugh loudly and eat greedily.”
Healthy Shopping on a Budget at Supermarkets
British Asians and Alcohol Calorie Labelling