Winners of the British Curry Awards 2014

The star-studded 10th anniversary of the British Curry Awards witnessed a video message from the Prime Minister, David Cameron, and a speech by guest of honour, Home Secretary Theresa May.

"The way curry is loved by everyone is a great example of our whole country coming together."

The 10th British Curry Awards took place on the Monday 1st December 2014 at the Battersea Evolution.

Widely considered to be the biggest event in the British hospitality calendar, the British Curry Awards brought together industry personnel, foodies, celebrities, MPs, and dignitaries from all around the UK.

Celebrating the £3.6 billion British curry industry, the prestigious awards ceremony was certainly a night to remember.

Singer Navin Kundra took to the stage with a special performance and Kate Silverton entranced the guests as hostess for the evening.

Kicking of the evening, Prime Minister David Cameron gave a speech to the audience, via video message: “Britain’s curry industry is not just a great example of the incredible contribution of our Asian communities. 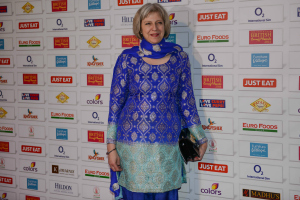 “The way curry is loved by everyone is a great example of our whole country coming together.”Home Secretary Theresa May, dressed in a sparkly peacock blue Indian outfit, was the guest of honour. In her speech, she said:

“The success of the British curry industry is about much more than your tremendous economic contribution to this country.”

She added: “It’s about the way you’ve become so much a part of the British way of life. Your businesses are as much loved and familiar as the local pub.”

The founder of the Awards, Enam Ali, said at the event: “I thought we would like to recognise the unsung heroes. They’ve done so much for this country to change the public perception of the curry. And I thought we haven’t got anybody to say, ‘Thank you. You’ve done well!'”

“I started in 2005. Now it’s become so big. It’s become the Oscars of the curry industry. Curry may be born in India. We’re making it ‘Great’ in Britain.” 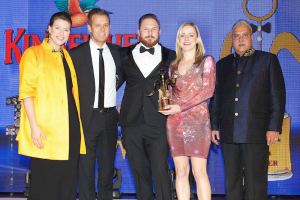 Of course being at the British Curry Awards meant that the food had to be nothing less than impeccable. Guests, nominees and friends enjoyed servings of tandoori salmon, methi chicken and lamb biryani. For dessert, they had badam kulfi, gajar ka halwa, and rasmalai.

Big winners of the night included Shams Uddin Khan, who took the ‘Lifetime Achievement Award’. ‘Best Delivery’ went to The Chilli Pickle, while ‘Best in London Central and City’ went to the deliciously appetising Cinnamon Club.

Five Rivers A La Carte, took the award for ‘Newcomer of the Year’. Accepting the award, Kindi Summer said: 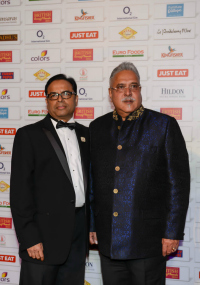 “There’s a lot more to come, I promise you that. It’s 10 years for the British Curry Awards, it’s 10 years for us as well, so the chef’s got a lot of big plans for the next 10 year coming up.”

Shampan, who won the ‘Best in London Suburbs’, said: “You build a family and not a team. And when you can build a family in a business, the world’s your oyster.”

Dishoom, the winners of the prize for ‘Best Casual Dining’, added: “Casual dining is when you go out whenever you feel like it. It is not fine dining. It’s not quick service. It’s the kind of experience anyone can enjoy whether it’s lunch, or evening, or weekend, or daytime, morning.”

Here is a full list of the winners of the British Curry Awards 2014:

Best in London Central and City
The Cinnamon Club

Best in Scotland
Light of Bengal

Newcomer of the Year
Five Rivers A La Carte

The British Curry Awards 2014 truly recognise the achievement of those involved in making the curry such a celebrated dish in Britain. With 10 years under its wing, the awards is certainly one of the main highlights of every food lovers calendar. Congratulations to all of the winners!

Harvey is a Rock ‘N’ Roll Singh and sports geek who enjoys cooking and travelling. This crazy guy loves to do impressions of different accents. His motto is: “Life is precious, so embrace every moment!”
British Asians and Alcohol Calorie Labelling
Vegetarian Recipes for the Festive Season