Winners of the Asian Professional Awards 2014

The first ever Asian Professional Awards took place at the Emirates Stadium in London on November 27th, 2014. The Awards was a spectacular evening celebrating the talents of the British Asian community across all mainstream professions.

"I wanted to help create the next generation of role models that people can aspire to be."

The Asian Professional Awards endeavours to recognise the incredible achievements and successes of the British Asian community.

The 10 categories covered the full scope of the professional world where the Asian community have made their mark. They include Banking, Dentistry, Education, Media, Technology and Public Service.

Co-Director of the Awards, Harry Virdee said: “As an Asian professional myself, I wanted to help create the next generation of role models that people like me can look up to and aspire to be. 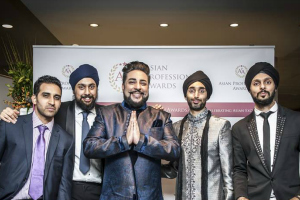 “Excellence within professions can often be hidden away, but the Asian Professional Awards makes sure that there is a platform from which we as a community can shout about our successes and inspire people to follow in their footsteps.”

The awards also highlight that ‘professional’ careers are not simply limited to the likes of medicine and banking, but can also include the creative arts and media as well.

This is something which is particularly key for the younger British Asian community who might feel limited in their choices of socially acceptable careers.

Of course, the talents of the British Asian community have also begun to be applauded by the mainstream as well, including the likes of Prime Minister David Cameron, Ed Miliband and Boris Johnson, who sent their

Congratulating the winners, Deputy Prime Minister Nick Clegg sent in a specially recorded video message which was shown at the beginning of the evening:

“Your achievements are all your own. But, in many ways, you’re standing on the shoulders of those British Asians who, for generations, have strived to make their mark on this country.” 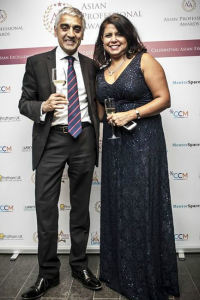 Winners included the likes of popular stand-up comedian, Paul Chowdhry who took the Media Award. Kiran Singh received the Design & Creative Awards, and the Banking Award was given to Asif Razaq.

Interestingly, the Dentistry and Medical Awards were given to husband and wife duo, Dr Seema Sharma and Professor Sanjay Sharma respectively. Delighted with the double win, Dr Sharma admitted:

“It is fantastic to celebrate Asian and British culture together, as well as inspire other professionals to excel in their own careers. However, I’m keen that we do not just celebrate our own successes but also support those who may not have the same opportunities as we have.”

Here is the full list of winners of the Asian Professional Awards 2014:

With such deserving winners proving to be great role models, it is hoped that younger generations of British Asians can feel inspired to achieve success for themselves and their community.

The first year of the Asian Professional Awards has proved an undeniable success on all fronts, and we can be certain that the 2015 awards will be even bigger and better. Congratulations to all of the winners!