Winners of the Asian Achievers Awards 2014

A star-studded affair, the 14th annual Asian Achievers Awards 2014 welcomed notable personalities and individuals from all walks of life. The glamorous evening celebrated the incredible achievements of British Asians across the UK.

"It gives me great pride to celebrate these individuals, who are exceptional role models for the next generation.”

The Asian Achievers Awards 2014 was a grand affair, taking place at the London Grosvenor House Hotel.

In recognition of the impeccable commitment of Asians in Britain, the awards have been designed to celebrate the immense achievements of those in our community.

The extensive list of categories picked key individuals from every discipline, including Arts and Culture, Media, Business, Sports, Community Services, and Uniformed and Civil Services. 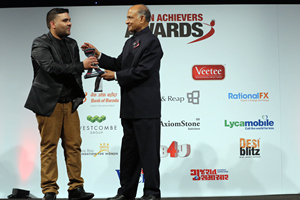 Online media partners for the event, DESIblitz were there to witness all the glitz and glamour of the star-studded night.

“To receive this level of recognition from my peers of fellow Asians is such a privilege. I’m proud of being a British Pakistani and I’m proud to represent the Asian community. I grew up immersed in Bollywood movies, where music, songs and extravagant dance sequences dominate, and that has really influenced the way I produce music today.”

The film picked up numerous accolades including New York Film Critics Best Screenplay, as well as being nominated for an Academy Award. A best-selling novelist, Kureishi is also listed as one of the 50 Greatest British Writers since 1945 by The Times. 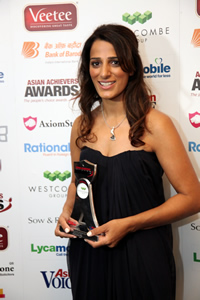 Special guest for the night included the Rt Hon Phillip Hammond MP, who is the Secretary of State for Foreign and Commonwealth Affairs.

In his speech, he congratulated the winners and nominees and all those Asians who make a vital contribution to British society:

“There is much to celebrate in the contribution of British Asians made to our national life – be it in sports, in culture, in academia, in public service and in community life.”

“The PM has asked me specifically to add his congratulations to all of you.”

One significantly poignant award was given in memory of the late Flight Lieutenant Rakesh Chauhan. Rakesh was honoured with the Editor’s Award for Bravery and Patriotism, after losing life when his Lynx helicopter crashed while serving in Afghanistan. The awarded was collected by Rakesh’s parents.

Other winners included, Dilawer Singh MBE who took away Sports Personality of the Year; co-founder of popular retail website, boohoo.com, Mahmud Kamani who received Entrepreneur of the Year; and Wasim Gulzar Khan MBE for Achievement in Community Service.

Paying tribute to the winners, Mr. CB Patel, the Publisher and Editor of the ABPL Group, which is responsible for the awards said:

“Our winners at this year’s Asian Achievers Awards have truly reached remarkable heights of success and achievement, and it gives me great pride to celebrate these incredible individuals, who are no doubt exceptional role models for the next generation.” 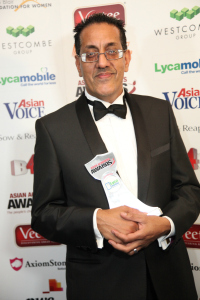 Guest Speaker was Cherie Blair, who heads the Cherie Blair Foundation for Women, which was the chosen charity of the awards ceremony.

In an inspiring speech, Cherie spoke about the immense work that her foundation is doing in empowering women through business opportunities in developing nations:

“My foundation’s mission is to provide with entrepreneurs in developing and emerging market with the skills, the technology, the networks and access capital they need to become successful small and growing business owners, enabling them to contribute to their families, to their economy, and to have a stronger voice in the society,” she said.

Here is the full list of winners for the 14th Asian Achievers Awards 2014:

Professional Of The Year
Prof Sir Tejinder Singh Virdee, FRS, Experimental physicist and Professor of Physics at Imperial College London and one of the ‘founding fathers’ of CMS

The 14th Asian Achievers Awards was an incredibly inspirational evening, which saw individuals bound by their Asian heritage, striving hard to make Britain a better place for all.

The Awards signify the diverse areas and industries in the UK where Asians have flourished, and also highlight the pride that their communities feel for them. Congratulations to all the winners!

Scotland Votes No to Independence
The Asian Media Awards 2014 Finalists