Winners of the British Fashion Awards 2014

The British Fashion Awards 2014 took place at the London Coliseum on December 1st, 2014. The glamourous event invited both celebrity guests and the British fashion elite. DESIblitz has the full list of winners.

"You've given me the ability to reinvent myself in a way that I am very grateful for."

British Fashion has spearheaded designer and couture wear across the world for decades.

With such incredible fashion labels and designers bearing the British flag, it is only befitting that they be recognised for their efforts at a glitzy Awards ceremony at the London Coliseum.

Taking place on Monday 1st December, the British Fashion Awards 2014 in partnership with Swarovski was a spectacular evening of haute couture and celebrity glamour.

Hosted by popular comedian Jack Whitehall, the British Fashion Council welcomed the fashion elite from across the UK and abroad. Guests included the likes of Anna Wintour, John Galliano, Tom Ford and Alexa Chung, who walked down the red carpet dressed in only the finest labels. 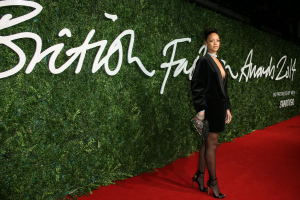 Chatting on the red carpet, a sexily dressed Rihanna said: “I love British fashion. It’s always new and innovative, original, creative, all the things that I love.”

The evening proved to be a fantastic affair for all the guests and the winners. Winner of the ‘Brand of the Year Award’, Victoria Beckham was speechless as she stepped up to receive her award.

In her acceptance speech she said: “Wow. Thank you. I am so proud to be British, and I am incredibly proud that I have built my brand here in the UK. I’d love to thank the BFC and the British Fashion industry for supporting me.”

The Spice Girl turned successful fashion designer recently opened her first London Store in Mayfair in September 2014. She went head to head with the likes of established greats Alexander McQueen and Stella McCartney for the ‘Brand of the Year Award’, but her sophisticated label has rapidly grown into a celebrity favourite, proving her to be a winner for 2014.

‘Emerging Menswear Designer’ was given to the innovative Craig Green, who has impressed audiences with his take on a Samurai and Guru inspired collection for Spring/Summer 2014. 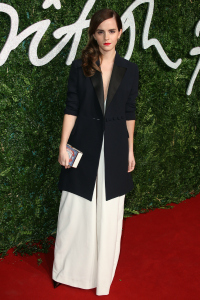 The ‘British Style Award’ was awarded to the stunning Emma Watson who dazzled in a plunging white halter neck jumpsuit. Given the award by a very dapper Harry Styles, who won the 2013 publicly voted award, Emma said:

“Thank you so much to the British fashion industry, you have been immensely supportive of me and my career and you’ve given me some really amazing chances and the ability to reinvent myself in a way that I am very grateful for. This is very special.”

Cara Delevingne who was up against her model colleagues, Jourdan Dunn and Sam Rollinson, won the ‘Model of the Year Award’. The young model has rapidly become a fashion icon across the world, featuring in many international campaigns and making headlines or her celebrity friends along the way.

Addressing the audience, the British supermodel said: “I apologise to the people who had to be there for my shoots, when I talk about my dreams, and play my music too loudly and dance around and not pay attention, but that is who I am, and thank you because you’ve supported me to do the things that I have truly wanted to do in life, and I would be truly nothing without fashion.”

“Being British, I have a very special sense of gratitude to this nation, for everything that I have been given in my life. And enormously thankful to the British fashion community for always being so supportive of risk-taking and creativity.”

“And thank you to all of the creative people in this room. Very especially to my wonderful London friends whose work inspires me every day. You make everything I do possible, and the world a more beautiful and joyous place. “

Here is the full list of winners of the British Fashion Awards 2014:

Model of The Year
Cara Delevingne

Known for its creative free spirit and edgy style, British fashion has cemented itself into the hearts and minds of the fashion conscious.

The British Fashion Awards 2014 applauded the risk takers of today, who have paved the way for new and innovative trends that have both shocked and wowed the world.

The well-deserved winners of the evening highlight the extraordinary lengths that British fashion has gone to, and the huge impact their unique and original tastes have had on us all. Congratulations to all of the winners!