Winners of the Punjabi Film Awards 2014

After premiering in 2011, the PTC Punjabi Film Awards have become an annual event in the industry’s calendar. With electric performances all round, the 2014 awards were full of humour, bhangra and Punjabi-style entertainment.

The PTC Punjabi Film Awards 2014 went off with a bang with legendary performer Diljit Dosanjh alongside Binnu Dhillon and Arjan Bajwa as hosts for the night.

Dosanjh lit up the Punjab venue with his creative wit and amazing performances especially with rising star Neeru Bajwa as they danced to some of their songs from Jatt and Juliet 2.

Diljit certainly looked the part in a dapper black tuxedo and wooed the starry crowd with his charm. And Diljit had good reason to celebrate as his film Jatt and Juliet 2 swept the board in terms of awards, winning Best Movie, Best Actor, Best Actress, and Best Director. 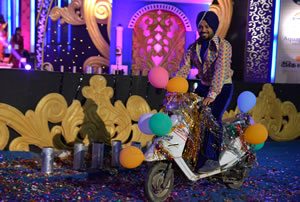 The film which released in 2013 became one of the highest grossing Punjabi films ever and was a superhit internationally.

Punjabi cinema has been growing at an incredible rate over the last decade or so. While it has always remained popular within the Punjab, it is now reaching out to much wider audiences in India and overseas, and is one of the fastest growing language cinemas in the country.

Punjabi cinema has also integrated much more with Bollywood, with leading actors appearing in both film industries.

One of the latter films of 2013 was Gippy Grewal’s Bhaji in Problem which featured Akshay Kumar. Bollywood is also becoming a regular concurrence on awards night as well, with some notables also arrived to the Punjab to wish their acting peers well. 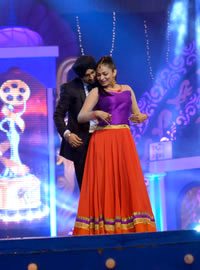 Dharmendra honoured the establishment with his presence and he congratulated the growth of the industry so far. A regular face in Punjabi cinema, he is also starring in Subhash Ghai’s debut Punjabi production, Double Di Trouble.

Vivek Oberoi, Mika and Neil Nitin Mukesh also made an appearance on stage, and Mika even took the award for Entertainer of the Year.

Jazzy B won Best Debut Male and Bollywood’s Neha Dhupia won the award for Best Debut Female for her role in Rangeelay.

While much of the Punjabi industry came out to celebrate for the evening, there were a few famous faces that were missing from both the crowd and the stage.

In particular, Gippy Grewal, who performed at the previous year’s ceremony was nowhere to be seen. This was a surprise for many as he released an impressive four films in 2013. Another non-attendee was Yo Yo Honey Singh who was rumoured to perform alongside Mika.

Neeru Bajwa won Best Actress and she notably thanked her Director Manmohan Singh for bringing her from Canada to the Punjabi film industry.

Here are the winners of the PTC Punjabi Film Awards 2014:

Entertainer Of The Year
Mika

Best Debut (Male)
Jazzy B for Best Of Luck

Best Performance in a Negative Role
Ashish Duggal for Haani

The PTC Punjabi Film Awards 2014 was an entertaining evening of comedy, dance and celebration. Congratulations to all of the winners.

Aisha is an editor and a creative writer. Her passions include music, theatre, art and reading. Her motto is “Life is too short, so eat dessert first!”
Superwoman Lilly Singh Goes to Bollywood
Mallika Sherawat joins CBS’s Hawaii Five-0