“So thrilled to be a part of Hawaii Five O, on CBS.”

International actress Mallika Sherawat who was last seen in Life OK’s The Bachelorette India hoping to find love, is all set to star in CBS’s prime time show Hawaii Five-0.

The exciting news is a big boost for Mallika and every other Indian actor looking to come state-side. After keeping the news under wraps for some time, she finally tweeted her big news to her followers: “Shooting for @HawaiiFive0CBS since last few days in Hawaii.”

Mallika is no stranger to America, having pursued a number of acting projects in the last 5 years. While she has had numerous roles in Bollywood, as of late she has performed mainly item songs and cameos. 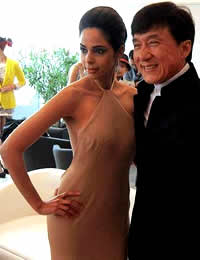 Mallika was born Reema Lamba in a small village in Haryana before going on to study Philosophy at Delhi University. She made her Bollywood debut with a special appearance in 2002’s Kareena Kapoor starrer Jeena Sirf Merre Liye.

The actress’ first started to make waves in Bollywood with her performance in Murder (2004) opposite Emraan Hashmi. Mallika was praised for her portrayal of the character Simran in her bold and emotionally charged scenes.

Mallika received a Zee Cinema Best Actress nomination for her role and the film went on to become a Box Office success.

Showing an early hunger for worldwide success, Mallika then starred in Jackie Chan’s Chinese film The Myth (2005). She also made her first appearance at the Cannes Film Festival in association with the film catching the attention of Time Magazine who called her the ‘next big thing’.

Mallika hasn’t had much critical success with her films throughout the years, but she stole the show opposite Rahul Bose in Pyaar Ke Side Effects (2006). Mallika was called ‘impressively natural’ in her role by Raja Sen and was praised throughout the industry. 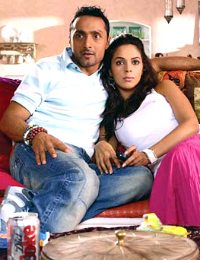 Mallika’s only other real Box Office success came in the form of multi-starrer Welcome (2007) starring Akshay Kumar, Katrina Kaif, and Anil Kapoor among others. The young actress has had much more success in Bollywood in her various item numbers in films such as Tezz (2012) and Guru (2007).

Lack of commercial success in India didn’t stop Mallika’s ambition and she set her sights further to Hollywood.

Mallika’s first Hollywood production was Hisss, directed by Jennifer Lynch in 2010, but it failed to gain positive reviews.

Her next venture in Hollywood was The Politics of Love (2011) which details the unexpected romance between an Indian-American Democratic and an African-American Republican and also failed to capture the audience’s interest.

Other Bollywood actors have crossed over into Hollywood with larger degrees of success. Anil Kapoor, originally came to the attention of Hollywood in his role as TV show host in Oscar Award winning Slumdog Millionaire (2008). He then followed this up with a successful stint on the eighth series of Fox’s Kiefer Sutherland’s 24.

Irrfan Khan is another Bollywood actor who has broken into Hollywood. He has had a number of big blockbuster films under his belt including The Namesake (2006), Life of Pi (2012) and The Amazing Spider-Man (2012) is also continuing on his journey in Hollywood filming the upcoming Jurassic World (2015).

Others such as Tabu and Anupam Kher have also had success in their international ventures. More recently, Priyanka Chopra has been applauded with a successful music career in America and also voiced the animated character ‘Ashanti’ in Disney’s Planes (2013).

The latest news of Mallika’s entry into the CBS show Hawaii Five-0 might however signal a change in the tide for Mallika’s success as an actress.

She will be acting alongside US TV veterans such as Daniel Dae-Kim and Masi Oka. The show, which premièred in 2010 as a revival of the original 1960’s series, follows an elite state Police Unit set up to fight crime in Hawaii. 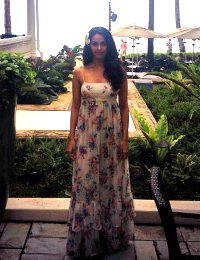 Along with news of her casting, Mallika also tweeted: “So thrilled to be a part of Hawaii Five O, On CBS.”

Mallika’s role in the show remains shrouded in secrecy for the moment while she films in Honolulu. However the strict contract meant Mallika had to pull out of a debate she was scheduled to take part in at Oxford Union focusing on women’s rights and gender oppression in February.

Mallika had been very excited to speak at a venue which has hosted influential leaders such as President Reagan, Mother Teresa and the Dalai Lama in the past. She said: “[I am] excited but also nervous. I feel honoured.”

Mallika also missed the 86th Acadamy Awards, despite being invited to attend. The actress tweeted: “Aloha, missed the #Oscars due to ma shoot schedule but loving being in Hawaii.”

However, these disappointments may be short lived. The original Hawaii Five-0 ran for 12 seasons and hopefully its revival will follow suit and make Mallika a permanent cast member. And who knows, a girl from a small town in Haryana might finally achieve her dream of international success in Hollywood.

Shuheda was born in Bangladesh and moved to the UK at a young age. She has a Masters in Film Studies and enjoys watching World Cinema films, Tennis, Formula 1 and reading. Her motto is "Main apni favourite hoon!"
Winners of the Punjabi Film Awards 2014
Madhuri and Juhi together for Gulaab Gang