Shah Rukh received this honour in recognition to empower women, along with his Bollywood accomplishments.

Promoting women empowerment, he helps survivors of acid attacks, through the Meer Foundation which is named after his mother.

This is the fourth conferred doctorate for Shah Rukh and first from Australia.

Shah Rukh dedicated this award to all those women who have been mistreated, as reported by Mid-Day:

“This is not an award for anything the Meer Foundation might have achieved. It is for the courage of every woman who faces the brutality of injustice, inequality, and inhumanity.” 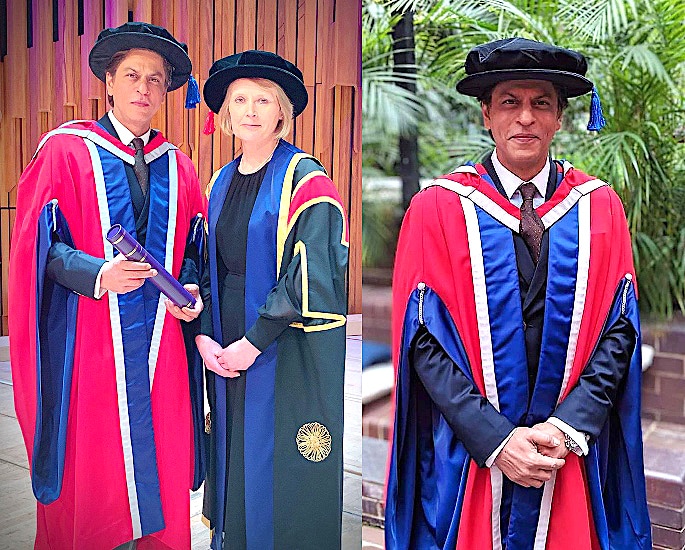 Recently, the Indian Film Festival of Melbourne also honoured SRK with the Excellence In Cinema award. After bagging the award, the Badshah of Bollywood expressed:

“Thank you all of you in Melbourne. It’s an honour and privilege for me. Awards are odd because to me an art form judged for its quality feels counter-intuitive.

“Art is an expression and cinema is the ability to create emotions and share experiences through stories. To be an actor is to live to know that each one is a mere illusion.

“When you are making a movie you can change a lot by changing the angle of the light and it strikes you that life is a lot like that as well.

Director and friend Karan Johar, who was also attending the festival, said:

“Shah Rukh Khan represents superstardom. I firmly believe the era we belong to, the term is understood only because of him.

“It’s not just about his large heart but his tremendous presence and aura.”

It seems Shah Rukh continues to be busy on a professional front. His company Red Chillies Entertainment is co-producing the horror series Betaal, with Gaurav Verma and Netflix.

This is the third time Shah Rukh is collaborating with Netflix, following their partnership for Bard of Blood (2015), starring Emraan Hashmi and Class of 83, that will feature Bobby Deol.

SRK and his son Aryan Khan earlier did the voice-overs for the Hindi version of The Lion King.

Shah Rukh lent his voice to the character of Mufasa, with Aryan voicing, Simba, son of Mufasa, Simba.

The Lion King released across India on July 19, 2019, in several languages English, Hindi, Tamil and Telugu.

DESIblitz congratulates SRK on his maiden doctorate from Australia and we look forward to many more future roles he does in films.

Faisal has creative experience in the fusion of media and communication and research which increase awareness of global issues in post-conflict, emerging and democratic societies. His life motto is: "persevere, for success is near..."
Bruce Springsteen attends ‘Blinded By The Light’ US Premiere
TV Actress Pradnya Parkar kills Daughter & Commits Suicide