Bollywood superstar, Shahrukh Khan, has been awarded a Doctorate degree from the University of Edinburgh. SRK was given the honour due to his incredible philanthropy and humanitarian work over the years.

“All you bored professors out there in the first row, come on up: Let’s do the Lungi Dance!”

The King of Bollywood can now add another title to his name, that of Doctor, after being awarded an honorary degree from the University of Edinburgh.

The prestigious university bestowed the honour on SRK in recognition of his incredible philanthropy and charity work over the years.

SRK received a degree Doctor Honoris Causa, which was given to him by HRH The Princess Royal in Edinburgh, Anne.

The Indian star then gave a captivating public lecture to the University’s many South Asian students and community groups:

“It is a pleasure to be honoured by the University of Edinburgh and tread in the footsteps of so many of the world’s illustrious thinkers, leaders and personalities.

“To have the opportunity to address one of the most esteemed educational institutions in the world is a special moment,” the actor said. 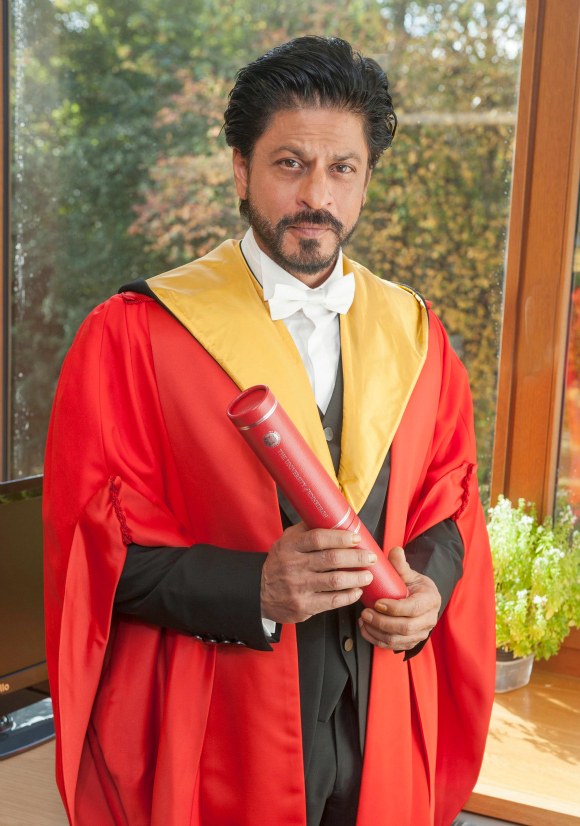 In his public lecture, SRK spoke about his journey as an actor in Indian cinema, and some of the defining roles he had the opportunity to play, and the life lessons that they taught him:

“Here’s my first life lesson, inspired by the movie title Deewana: Madness (of the particularly nice/romantic kind) is an absolute prerequisite to a happy and successful life.

“Don’t ever treat your little insanities as if they are aberrations that ought to be hidden from the rest of the world. Acknowledge them and use them to define your own way of living the only life you have.”

He offered several quips of wisdom, including the importance of facing your fears no matter what:

“Don’t let your fears become boxes that enclose you. Open them out, feel them and turn them into the greatest courage you are capable of.”

All in all SRK’s engaging lecture was one of encouragement and self-help, and speaking to the vast South Asian audience, he ended by saying:

“Live now. Live today. You may not see it with your youthful eyes, but NOW is as much time as you will ever get. Because tomorrow we will all be dead. And just in case there is no cycle of rebirth etc…why take a chance.

“I don’t want to end this on a cynical note by reminding you about the reality of death. I want to let you all know that how important your today…your now is. Study hard. Work hard. Play harder.

“Don’t be bound by rules…don’t hurt anybody and never ever live somebody else’s dream.

“Take it as the only truth you need to know. Take it and believe it because the most unlikely to make it Bollywood is telling you this…the most romantic hero who doesn’t look anything like chocolate or taste like it.

“Now, all you bored professors out there in the first row, come on up: Let’s do the Lungi Dance!”

SRK later tweeted to his gratitude to his 15 million Twitter followers:

My speech today is about Life Lessons at the Edinburgh University & my biggest learning is Life is the only Miracle. pic.twitter.com/CcIwDDUe9k

The Bollywood superstar who has over 80 films to his name is both a global household name and national treasure in India.

While best known as Bollywood’s Romance King, the actor has been heavily involved in humanitarian work over the years.

Some of his charitable work has included bringing solar power to some rural villages in India, fundraising for tsunami-devastated areas and creating a children’s ward at a hospital in Mumbai.

No doubt much of the actor’s altruism has been aided by his global reach as an international superstar, and it is certain that this platform has given SRK the opportunity to pursue these projects.

“The University of Edinburgh has very strong ties with India and I am delighted that we are able to recognise the philanthropic work and career of one of the most outstanding stars of world cinema. 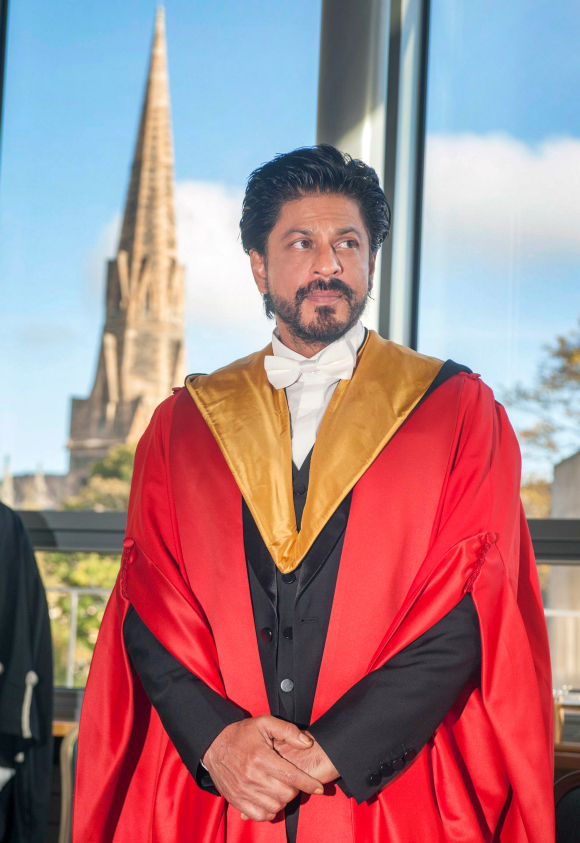 “It is a great privilege to present Shahrukh Khan with one of our highest honours, a doctorate of the University.

“As India’s population and economy grow, so too does the demand for world-class education. Our aim at Edinburgh is to build partnerships and strengthen awareness that will reinforce our position as the partner of choice for the Indian knowledge economy.”

Shahrukh added: “I look forward to the University continuing on its path as a great civic university, demonstrated by its partnership with India, addressing health, academic and research excellence and social justice.

“I hope that many more of India and South Asia’s brightest minds get a chance to learn, think and grow at Edinburgh.”

The world-class university has regularly boasted it ever-growing Indian and South Asian student population. Forming strong links with India for the last 250 years, the first Indian student at Edinburgh graduated in 1976.

Aisha is an editor and a creative writer. Her passions include music, theatre, art and reading. Her motto is “Life is too short, so eat dessert first!”
Top 7 Dialogues of Amitabh Bachchan
Should Shahrukh Khan go to Hollywood?