Asiana Bridal Show 2014 wowed Birmingham with its favourite collections and designers at the Edgbaston Cricket Ground. DESIblitz has all the highlights and images.

The bridal colours for the next season include hot pink, orange, mint green and black.

The days of the traditional bride in red accompanied by a well matched groom are long gone.

The Asiana Bridal Show 2014, which took place on Sunday 30th November not only showcased well known international designers, but championed West Midlands designers who have been making waves with British Asian fashion on a local level.

These British Asian designers were happy to display their designs in their home county. The local talent included: Adaa by Gudu G, Ahsan’s Menswear, Diya’s by Zari, Hoor by Qasim, Khushboo’s By Chand, Noor Bridal House, Sati and Sache by Asif.

Other big names that graced the stages were; Avaaya, Kyles Collection, Monga’s, RDC London and Traditions. With such world-class talent all coming under one local roof, it was no shock that the catwalk was filled with excited Desi fashion lovers. 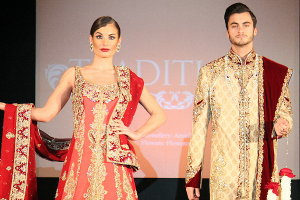 The venue was transformed to include stalls showcasing couture wedding clothing, jewellery and decorations.

Visitors could network with wedding planners, DJ’s, caterers and decorators who could help plan your entire wedding. Attendees could also pay £10 per head and enjoy a delicious desi 3-course meal.

Fashion shows took place throughout the day at either 1pm, 4pm or 7pm giving the flurry of crowds a chance to enjoy the show at a time of their choosing.

The large halls of the Edgbaston Cricket Club accommodated a large number of people and a long catwalk with screens for those sitting further back.

The runway offered a number of new trends to look out for when it comes to wedding season 2014. For brides, headpieces are still going strong. Diamante and crystal headpieces which drape around the forehead offer a bit of glamour to a slicked back bun.

Kyles Collection took this a step further, ranging into hip jewellery and long necklaces which either fall to the belly button or drop elegantly to the back. 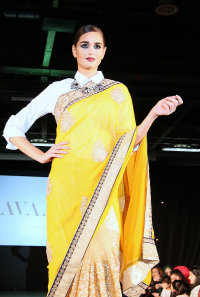 Alternatively, for friends and families of the wedding party, Avaaya showed a current and classy selection of small statement necklaces on top of tailored shirts, paired with a sari dupatta. This look certainly works for those who do not want heavy jewellery, but would still like to shine.

Jewellery for men is also becoming bigger in the wedding fashion market. Mens designer, Ahsan added a simple feather to the traditional wedding cap, accompanied by a dangling piece of gold or silver jewellery to attach to the side of the cap.

Jewelled belts for a sherwani could also be seen on the runway, showing that jewellery is just as important for finishing an outfit for men as it is women.

Sache and Khushboos showed their bridal collections, which included princess puffy lenghas with multi-coloured pleats, high neck and backs, and a lot of velvet. The models of Sache giggled and vogued on the catwalk, showing how much fun they were having while showing off their stunning attire.

Typically the colour black is never associated with the bright shades of an Asian wedding, but the glamorous black and gold combination on velvet suits, saris and dupattas dominated Khushboo’s collection, with a variation of simple A-line dresses, to sectioned pleats of velvet on lenghas. The entire collection mixed black velvet with hems of bottle green or red for a pop of colour.

Designer Chand from label Khushboo’s By Chand spoke about his decision to incorporate the dark shade: “Black is the colour of sophistication and elegance.

“We all know about the power of the Little Black Dress – I used that as my inspiration to create a bridal collection where it’s the details that matter, not the colour.” 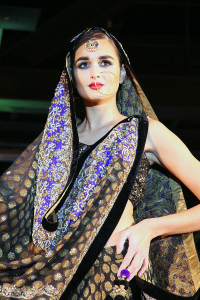 “Embellishment plays a key role in Asian fashion and by ensuring the colours don’t distract, the craftsmanship gets the attention it deserves.”

Alternatively, design guru Sati Takhar from Sati’s designs showcased his all white creations, which is a first for Asian bridal wear. Seen as a popular colour for registrations and smaller ceremonies, this collection showed that the colour white is nothing to shy away from as an Asian bride.

His show-stopping piece was a sari lined with faux fur, perfect for a winters wedding. He explains:

“Faux fur isn’t something usually associated with weddings yet it adds a touch of glamour and luxury; two essential elements for brides so I incorporated fur, it’s my interpretation of how eastern fashion can blend with western fabrics: it’s fusion wear but not as you know it.”

From the fashion show, it was obvious that designers wanted to add fusion to the bridal fashion industry. More focus is put on statement jewellery for both men and women which shows theres more to being a bride and groom than the classic red dress.

The bridal colours for the next season include hot pink, orange, mint green and black. So dare to experiment with your wedding attire!

Huma is a Media student with a passion for writing anything fashion, beauty and lifestyle related. Being a bookworm, her motto in life is: "If you only read what everyone else is reading, you can only think what everyone else is thinking."
Winners of the British Fashion Awards 2014
Luxurious Lingerie Brands for Her