"We found a good location that made sense in Earls Court. It just kind of all came together this year."

What happens when you have a room full of celebrity guests, award-winning artists and long-legged women in their underwear? The pleasure of a Victoria’s Secret Fashion Show, of course.

Making it the hottest party of 2014, the VS Fashion Show had its London debut on Tuesday 2nd, December 2014.

Held at Earls Court, the event exhibited the latest collections of lingerie, including some stunning couture pieces.

The show welcomed a host of celebrity guests and attendees, including Spice Girl Mel B, Liam Payne of One Direction and Chelsea Boss, Jose Mourinho. 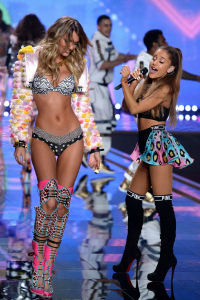 Alongside VS’s beautiful Angels taking the runway, guests were entertained by the likes of artist of the moment, Taylor Swift who had also performed at Victoria’s Secret’s 2013 showing.

Taylor was joined by pop princess Ariana Grande, and a very lucky chappy, in the form of Ed Sheeran.

While Ed chose to keep it suave and sophisticated in a waistcoat and tie, Taylor and Ariana had specially designed outfits made.

Ariana Grande later admitted she loved her black two-piece outfit for the show. She told the Daily Star:

“They are dressing me up with the prettiest things. If only I could find some stilts because I’m only 5ft 2 and all those models are six feet.”

For 2014, the designers Victoria’s Secret had a stunning array of costume themes. They ranged from gold leaf wings with beautiful beading, known as the ‘Gilded Angels’. The ‘Exotic Traveller’ saw outfits with mirrors and jewels; a cross between Jasmine and a Mughal princess. 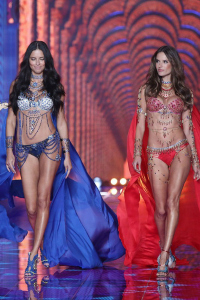 Taking over 1,380 hours to make, they were courtesy of Mouawad. The jewellers used 16,000 rubies, diamonds and sapphires, strung together with 18 karat gold.

The choice to move to London was one that was on the VS cards for a while. Back in April 2014, Adriana Lima was at the new Bond Street store to break the news of the London switch.

Limited Brands Chief Marketing Officer, Edward Razek said: “The brand has been wanting to show in London since 1998.

“Candidly, in 1998 when we came to London, no one knew who we were. We’ve started opening stores in London — I think we’ve got six stores in Great Britain at the moment and we hope to open more here. We found a good [show] location that made sense in Earls Court. It just kind of all came together this year.” 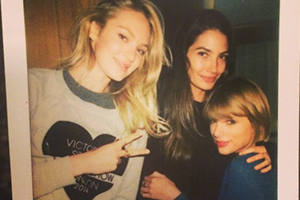 This time around, Taylor Swift was significantly less red, white and blue. She showcased two ensembles, including a particularly racy, black lace gown.

Ed Sheeran seemed delighted to be surrounded by Victoria’s Secret Angels. But the hitmaker couldn’t resist a cheeky jab at the slender models, telling his 11.3 million Twitter followers:

His face was a picture on stage, performing as Angels, Alessandra Ambrosio and Adriana Lima glided by.

Meanwhile, Bang Bang singer, Ariana Grande took to twitter to joke: “A Victoria’s Secret angel accidentally smacked me in the face with her wings and it was awesome #goals #bangbangintomyface.” 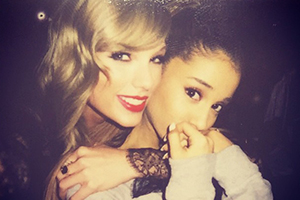 Ariana and Taylor bonded the night before the show. The honorary Angel’s had a pyjama party ahead of the exhibition:

“Taylor is really sweet, we are going to have a girl’s night in tonight,” she revealed.

“I want to hang out with the girls before the show. She’s doing something incredibly special for pop and I love pop. Her album is actually selling, in a time like this. It gives us all hope.”

Fans of the Angels will not have to wait too long to see the Fashion Show for themselves.