Chris Gayle hit the most brutal T20 innings in the history of the game, as Royal Challengers Bangalore defeated Pune Warriors India by 130 runs during the 2013 season of the IPL. Gayle reached his century off 30 balls, the fastest in T20 cricket history.

"His innings will go down as the greatest in the brief history of T20 cricket."

Chris Gayle put up an outstanding batting performance at the M. Chinnaswamy Stadium in Bangalore on 23rd April 2013. The West Indies opener broke a series of records in the match played between Royal Challengers Bangalore [RCB] versus Pune Warriors India [PWI]. The key record being the fastest century in cricket history.

Gayle was instrumental as RCB hit a record twenty-one sixes during their innings. RCB posted 263 in their allotted twenty overs, making this the highest team score in the T20 format.

In reply to this mammoth total, PWI managed to score 133-9. Thus RCB completed a fine victory by a winning margin of 130 runs, the biggest in IPL history. According to Gayle everything went perfectly right for him on the day. Speaking to the media a delighted Gayle said:

“Words can’t explain how I feel, I think later on tonight when I am by myself I can look back and reflect on what I’ve done today.” 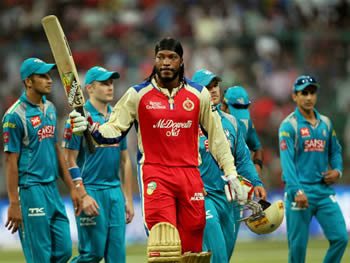 “I’m grateful, overall from a team point of view, I’m really happy with the win, that put us on top of the table, just one of those innings, one of these days when you come out and things go according to how you want it to,” added the ace batsman.

After a brief rain delay, Chris Gayle blasted the helpless bowlers representing the city of Pune. Gayle not only played his natural game, but also took on Duckworth-Lewis in case there was further downpour.

He reached his fifty off 17 balls and cut loose after that. Two successive overs went for 28 and 29 runs respectively, as he reached his hundred with a gigantic six off just 30 balls.

And the carnage did not just stop there, with the ball disappearing to all parts of the stadium. His 150 came off just fifty-three balls – simply incredible. Gayle remained unbeaten on 175, the highest individual score in T20 cricket. He went past Brendon McCullum’s score of 158 not out [2008] for Kolkata Knight Riders against Royal Challengers Bangalore.

Gayle also broke the record for the fastest century in T20 cricket, previously held by Andrew Symonds. While playing for Kent, Symonds scored hundred off 34 balls against Middlesex in 2004. Yusuf Pathan’s IPL record of hundred in 37 balls for the Rajasthan Royals versus Mumbai Indians in 2010 was also erased. Gayle hit seventeen towering 6s in the match, a new record for T20 cricket. He also hit thirteen glorious 4s in an innings of sheer brilliance. 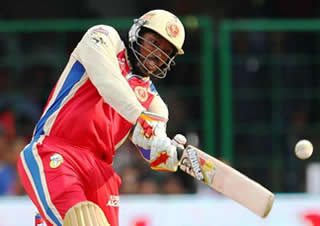 Throughout this remarkable innings the Gayle storm was well above category five. It was an astonishing innings witnessed by a large crowd in the ground. It was equally enjoyable for the millions of fans worldwide watching the drama unfold on television.

The Warriors did not see the last of Gayle, as he also contributed with the ball, taking two wickets for just five runs. He took the last two wickets in the Pune innings, restricting the visitors to a very low total.

Chris Gayle was always by far the best T20 player in the world, but even by his standards this was an innings of such rare brutality that it just left everyone in absolute awe of this mans ability.

Besides hitting some explosive blows, it was the fact that he was playing shots with so much ease. If analysing the performance of Gayle, one can conclude that he is cool as a cucumber on the crease. His slim build combined with sheer muscle power, enables him to swing the bat so freely.

“I think it’s a super human effort. These kinds of knocks are quite a rare gem. Hitting sixes at will and playing shots so effortlessly. Chris Gayle makes batting look so easy and simple.”

Even though the Warriors had a weak bowling attack, its hard to imagine if any bowler could have escaped the force of this dashing batsman.

The Bollywood fraternity, which has a significant interest in the IPL, reacted to Gayle’s amazing feat on Twitter.

Superstar of the Millennium Amitabh Bachchan tweeted: “Never before, perhaps never again Chris Gayle in T20 record knock! If ever again – Chris Gayle I would assume – 200*..??”

Shilpa Shetty who has a stake in Rajasthan Royals also tweeted: “Unbelievable innings by Gayle! Thank God we are not at the receiving end!! ha ha ha;)  he makes it all look so easy!” 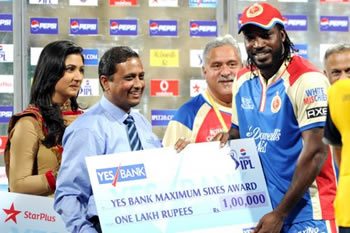 “I am sure that we speak for all true fans of West Indies cricket when we say that his innings will go down as the greatest in the brief history of T20 cricket.”

Certainly this innings of Chris Gayle’s will not be forgotten in a hurry. All of his fans look forward to some more cricketainment in the forthcoming matches.

There is no doubt that one-day he might be the first to accomplish a double hundred in this format of the game.

This years IPL has seen some very exciting cricket, with television ratings peaking on a frequent basis. This wonderful innings in particular has brought life to the IPL.

Faisal has creative experience in the fusion of media and communication and research which increase awareness of global issues in post-conflict, emerging and democratic societies. His life motto is: "persevere, for success is near..."
Indian Premier League 2013 in Sixth Season
Amir and Haroon Khan make Boxing History