Boxer Amir Khan registered a victory against Julio Diaz in a nail-biting boxing match at Sheffield. Following in his elder brother’s footsteps, Haroon Khan also made his professional debut against Brett Fiode. Historically, both Khan’s won their fights on the night.

Clearly victory is in the Khan bloodline as both Amir Khan and Haroon Khan made boxing history by defeating their opponents on the same night.

Amir perhaps unconvincingly beat Julio Diaz in the Sheffield ring, which saw an impressive fight from Diaz. Amir was already under a lot of pressure to win the match as soon as he set his foot in the ring. Already suffering losses against Lamont Peterson and Danny Garcia in previous matches, Amir was keen to set the record straight.

Amir was well-composed at the beginning and won the starting rounds easily. But in the fourth round he suffered a knockdown. A powerful blow from Diaz which got him floored.

Reacting to the knockdown Amir said: “Diaz caught me while I was off balance. I could not manage to get my stance back and I went down. I tried to keep moving to recompose myself.” 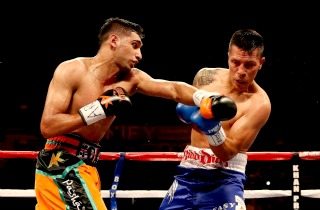 Diaz came on to Amir with full force in the final rounds with a series of lethal blows but Amir managed to edge out Diaz and won the match on the scores of 114-113, 115-112 and 115-113. Khan’s fighting as usual kept the audience on the edge of their seats:

“Diaz is a strong opponent. He kept trying to go through my defence all the way through the fight,” said Amir after Diaz put up a brave show and tested his skills.

Two time world champion Diaz’s late attempts couldn’t give him enough points to secure the title and he lost out narrowly. Following the match, Diaz said:

“He (Amir) showed a lot of heart. Many people may not realise it but he is a tough fighter. I tried to get through him after the knockdown but he made sound decisions after falling down. He didn’t break down when anyone else would have been on his knees.”

Amir was always the favourite for the match and was expected to win the match with ease. But the fight turned out to be a very close affair. Amir clearly needs to work on his defence. Diaz missed out on many opportunities otherwise the outcome could easily have been different. 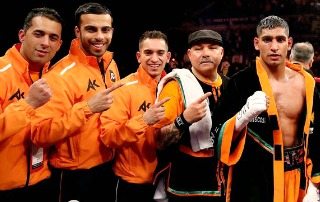 Amir also admitted that his performance was not his best and said: “I am going to fly over to San Francisco and doing a mini-camp so that I can work on things that need to be improved. I know the mistakes I made.”

He will now return in December to clash for the world title. Realising that this could be his last match in England due to lack of interest of other key boxers to fight here, he thanked the crowd for their wonderful support before leaving the ring.

In another interesting boxing match Haroon Khan, younger brother of Amir made his pro debut on a winning note. Haroon’s match was scheduled just hours before Amir’s match against Julio Diaz. 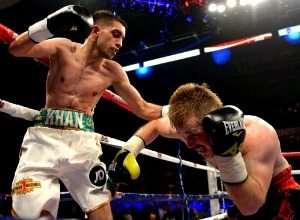 The 21 year old put up a brave effort to beat Brett Fiode and bagged a 40-37 victory in Sheffield, England. The flyweight match proved to be an interesting one as the debutant looked eager to make a solid impression.

Sometimes under the pressure to perform in the shadow of his older brother’s footsteps, Haroon looked too eager to impress. It will take a while before he finds a steady and confident boxing streak.

Haroon received a warm welcome from the crowd when he stepped into the ring. He seemed keen to land his overhand right, and with some success.

He also tried a spectacular three punch combo but could land only one effectively in the third round. Fiode fought back bravely in the final three minutes but could not turn the tides to his favour and lost a close battle.

Elated after his first win, Haroon said: “It felt a lot different. It took a couple of rounds for me to settle. It is different to the amateurs. It was a large crowd and it was a bit tough, but a win is a win.” 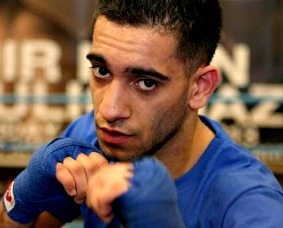 Haroon entered the boxing scene after representing Pakistan in the 2010 Commonwealth Games hosted by Delhi, India. He missed out on the chance to represent Britain after being overlooked by judges in favour of Andrew Selby. Interestingly, Haroon managed to get his own back by defeating Selby in the quarterfinals.

Despite his family background, it was not easy for the younger Khan to start his career in boxing. His mother, Falak, did not want him to continue his career in boxing at all after witnessing Amir being knocked out against Beridis Prescott in just 54 seconds into his 19th professional fight.

But nothing can keep Haroon away from the ring and with the added pressure of Amir’s legacy, he has a lot to prove over his next few matches.

While Haroon is just getting warmed up, older brother Amir has hung up his UK gloves to take on the United States competition where he will spend the next few months training for the world title.

Amit is an engineer with a unique passion for writing. His life motto goes as “Success is not final and failure is not fatal. It is the courage to continue that counts.”
Chris Gayle scores fastest century in Cricket
Sachin Tendulkar has a Coin of Gold