"It's also an immigration thing when it comes to arts and acceptance."

Haroon Mirza is a British Asian artist who specialises in the field of sound and electricity.

Mirza has gained international recognition for his work, in his lengthy career.

He has held exhibits in Venice, New York and London.

The artist’s latest work is being featured in Birmingham’s Ikon gallery and took three years to compile.

Curators at the gallery and Haroon himself wished to display both new and old works of the artist.

Thus taking viewers on a journey through his own artistic development.

DESIblitz had an exclusive tour of this exhibition, in addition to speaking with this intuitive British Asian artist.

Covering topics ranging from his inspirations, attempted appropriations and his take on being Desi in the art game, Mirza was electric with insight into his world.

‘Reality is somehow what we expect it to be’ – Ikon Exhibit 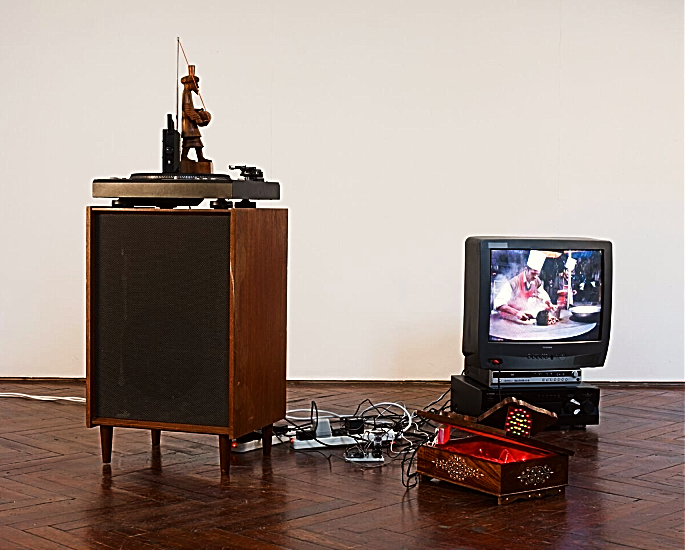 Walking into the exhibit, the buzz of electricity is audible within the air.

Strange sounds jar you as you enter the exhibition.

Thus spiking the crowd’s curiosity as the promise of innovative and engaging art is tangible within this Ikon gallery exhibit.

The Director of Ikon gallery, Jonathan Watkins stated about the exhibit:

“We decided in a lot of back and forth discussions, to tell a story that better fit the space of the gallery and reflected Haroon’s life’s work.

“There is something fluid and fugitive about Haroon’s work.”

“He talks about Asian cultural images towards music and how that inspired him to incorporate sound in his work.”

Many of the art pieces include sounds, however, the piece Watkins was referring to was the ‘Taka Tak’ piece which Mirza created in 2008.

The piece includes an old turntable, FM radio, TV and speaker with many sensory based stimulations at play.

He also captured footage of the havoc and reactions on the streets of Pakistan after the assassination of  Benazir Bhutto.

These images are on loop creating a magnetic circular image – something which is prominent throughout Haroon’s work.

The idea of cyclic patterns repeats throughout the exhibit.

This exhibit aims to highlight Haroon Mirza’s own understanding of nature and human perception, playing on the sight and sound senses.

This is done to provoke people into a deeper thought about reality, the cosmos and the universe we all exist in.

Being A British Asian Artist 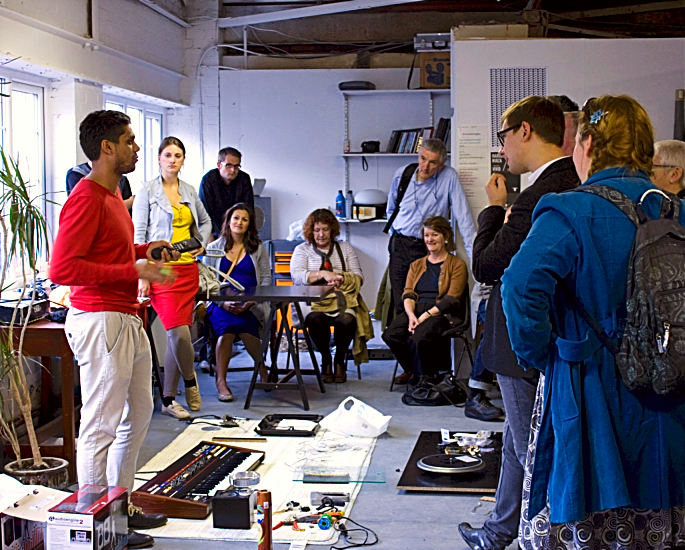 Speaking to Mirza directly we asked the artist about his experiences of being an artist and how being a British South Asian played a part in his experiences.

Mirza was very forthcoming and open about the struggles and eventual acceptance he gained with his career choice:

“My culture has been a big thing for me. The arts just wasn’t something that was encouraged at all.”

“Well now it’s fine but in terms of my family it was considered ‘throwing my life away’.”

Speaking about his choice of pursuing art professionally, Mirza highlighted that this definitely was not a ‘Desi approved’ career choice for his British Asian household.

“It’s interesting that I went this way, into the arts rather than being a doctor, engineer or lawyer.

“I think a lot of childhood event contributed to this being my decision though.”

Haroon explained how he went through his childhood unaware that he was severely dyslexic, meaning that academics came as a struggle to him.

“Being severely dyslexic and unaware of it due to lack of a diagnosis meant that this was the only thing I enjoyed and was actually good at.

“It was the only thing I could actually do to be honest.”

Mirza highlighted that with his own success the acceptance towards his career became more acceptable within the British Asian community. 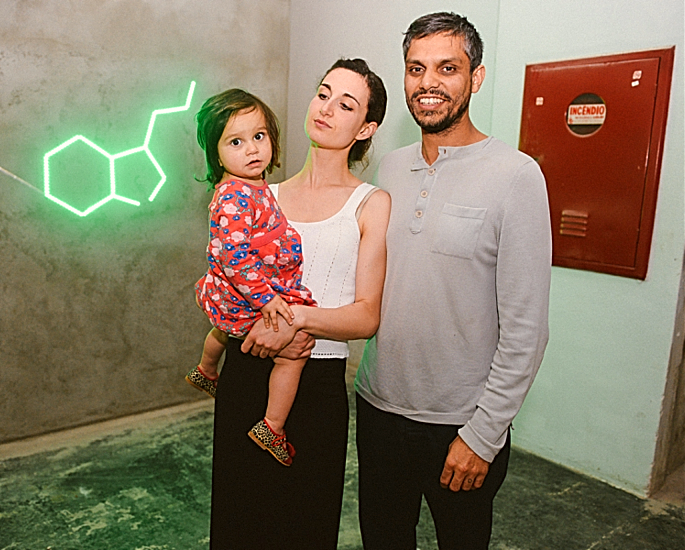 While Haroon admits that being a British Asian artist came with its struggles he is not bitter towards the opinions people held.

In reference to his family, he very insightfully explained how being immigrants could have aided to this negative mindset towards the arts.

“It’s also an immigration thing when it comes to arts and acceptance.”

“My parents came here to a better life, for themselves but more so for their kids. At that time certain thing held a higher value.

“Being financially secure was a huge thing. There wasn’t a lot of understanding about the arts, it wasn’t seen as a lucrative industry.

“There also weren’t many British Asian role models to highlight that the arts can be a successful path albeit difficult but it is rewarding.

“Obviously now it’s all fine but these issues did play into it and shaped me as I am today.”

Many British Asian parents will steer and even pressurise their children into the higher paying careers as they still have the mentality, whereby financial security comes above all else.

However, as time has progressed and generations have assimilated to Western culture, we are seeing more and more creative British Asians emerge.

Haroon himself has been in the industry for 15 years himself. Highlighting that with passion and determination success is achievable. 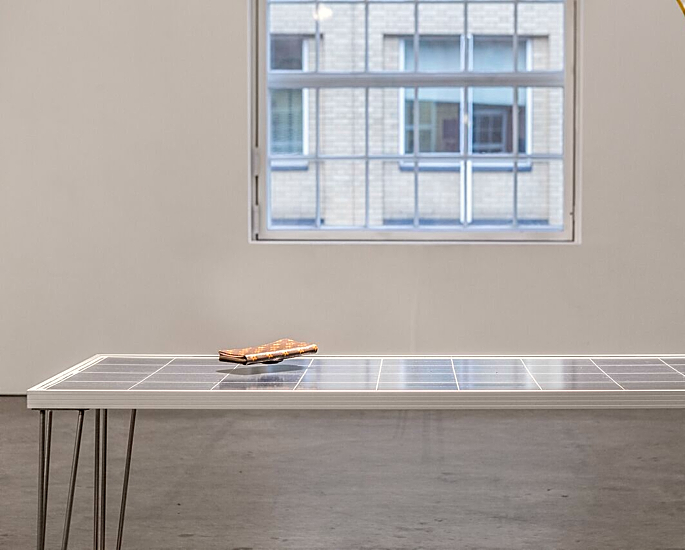 There has been a lot of speculation over one particular piece in Mirza’s Ikon gallery exhibit.

They featured fake Louis Vuitton bags and purses against photovoltaic panels and turntables.

When questioned as to what the inspiration was behind this piece, Mirza noted appropriation.

“It was while I was attending an installation of my exhibits in Venice, I happened upon a Louis Vuitton storefront and it became painfully obvious to me.

“I had received emails claiming their window displays were, very similar let’s say to my artwork, however, I kept an open mind.

“Upon seeing this Venetian display I contacted Louis Vuitton in regards to accreditation and collaboration.

“I was firmly shot down.

“So as they have paid me a compliment with their store-fronts I am now complimenting them back with these counterfeit creations in these artworks.”

“I have collaborated with artists in the past featuring footage or rough cuts of theirs in my work but it’s always a conversation.

“There is permission given and continual discussions taking place.

“Unlike the current ping pong at play with Louis Vuitton, it is flattering but frustrating.”

“These works are here to comment on the idea of appropriation and intellectual property.

“I myself am unsure if I wholly believe in intellectual property and this work is a reflection of that.”

The collection is the largest display of Mirza’s work across the years and in the UK ever.

An extremely thoughtful and innovative designer, any art connoisseurs should be sure to view this exhibit while it is open to the public.