Rasheed Araeen was one of 29 artists to have their work displayed at Ikon Gallery’s ‘As Exciting As We Can Make It’ 50th anniversary exhibition. DESIblitz finds out why Rasheed is one of the most revered Asian artists of all time.

British art has come to realise that an injection of culture only enhances.

Called, As Exciting As We Can Make It, the exhibition focuses on artwork shown specifically at Ikon during the 80s, a time that saw the emergence of postmodernism. Ikon describes it as:

“A comprehensive selection of painting, sculpture, video, installation and photography, it is a look at recent British history through the lens of a major regional gallery.” 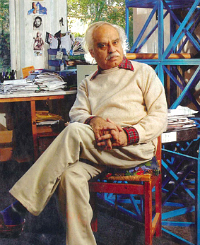 One of its showcases is of the controversial Pakistani artist, Rasheed Araeen, who faced much backlash with his original paintings and artwork.

The 80s defined a cultural shift within Britain and awakened the nation to become more politically aware. Both politics and popular culture were incredibly influential themes within art throughout the decade.

Araeen, who had been rejected by the art world for years, was finally due to receive the recognition that he deserved, and his exhibition showcases the artist’s incredible talent.

Born in Karachi in 1935, Rasheed Araeen moved to Britain and currently lives and works in London, having done so for many years now. He is known particularly for his expertise across a broad spectrum of the arts, being an artist, writer and also a curator.

Araeen’s art ranges from abstract painting, photography, collage, drawing and performance, intertwining his own ideologies and cultural identity within each creation.

His rectilinear painted steel sculptures are both impressive and popular, giving the viewer an opportunity to interact with the art. When sourcing his inspiration, he asks himself:

“Who am I? Where do I come from? How do I, a non-European, relate to the European society I find myself living in but do not belong to? How do I react to its assumptions of white superiority?”

From Modernism to Postmodernism. A Retrospective: 1959-1987 was an exhibition held at Ikon that first allowed Araeen a valuable opportunity to present his work and to get his artistic voice heard. Showcased between November 1987 to January 1988, the end result was amazingly well received.

This is not the first time that Ikon had considered him as a candidate to exhibit at their gallery. In 1987, the Director of Ikon, Hugh Stoddart, disapproved of Araeen’s requests to slaughter a sheep on their premises, resulting in a bitter feud that determined his work unsavoury and unsuitable.

His conscious experimentation of different medias and a distrust of mainstream art meant that his art fit in harmoniously within the postmodernist movement. Modernism was exclusive of a mainstream, European world and did not welcome international artists. 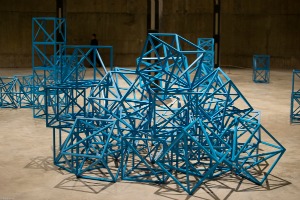 Currently displayed at Ikon is Araeen’s ‘Green Painting’ 1985-86, which was previously shown as part of his retrospective. His art is described as the ‘key work in the orbit of Postmodernism’.

Made up of a 3×3 grid containing a cruciform of five colour photographs depicting blood on the ground at the festival of Eid-ul-Azha from the slaying of animals. Its motive is to counterbalance the oppositional ideologies between the East and West.

The poignant green panels construct the corners and are to reflect minimalism. They are a sarcastic gesture to modernism, suggesting that other cultures are non-representational within the movement. The piece criticises the binary opposition between the ‘First World’ and the ‘Third World’.

It is important to understand as a viewer the refreshingly diverse perspective from which the ‘Green Painting’ was created. Animal sacrifice is continuously attacked by animal rights activists and labelled as barbaric, bloodthirsty ritual slaughter. It is such taboo subjects that tend to sit uncomfortably within Western countries.

The theme of sacrifice is recurrent through Araeen’s work. His outlandish ideas have emphasised a cultural divide in the Art world and has attributed to his successes. His work has helped to bridge the gap in the understanding of artists from other parts of the world.

Araeen’s ‘Green Painting’ is importantly situated between work by both Art and Language and Terry Atkinson. This positioning is particularly significant as these three artists were renowned for stirring up controversy within the 80s. They were argumentative and struggled a great deal to have their art understood within Britain.

Rasheed Araeen’s first exhibition at Ikon was incredibly influential to the art scene throughout that decade and encouraged a more culturally diverse look at art. Asian artists became noticed through the pivotal journey of postmodernism.

As the 90s approached, Ikon adopted a more global outlook, widening its search for new talent across the globe. This awareness was a result of the appreciative response from art critics and the general public to From Modernism to Postmodernism. Rasheed Araeen. A Retrospective: 1959-1987.

The British Asian artists of today have Rasheed Araeen to thank for the increasingly diverse range of art shown and now available in Britain. British art has come to realise that an injection of culture only enhances. Doing so it has created richer, intelligent and more original work.

Laura is an avid writer with a particular interest in writing from a feminist perspective regarding a variety of social and cultural issues. Her passion lies within journalism. Her motto is: “If there's no chocolate then what is the point?”
Famina B ~ A Talented Fine Artist
Yasmin Akhtar ~ Home Away From Home