A collection of photos of the singer-songwriter Amy Winehouse taken by photographer Ram Shergill have been acquired by the National Portrait Gallery.

"You can see Amy in her original true self and self styled."

Fashion Photographer Ram Shergill has agreed to give a collection of previously unseen photos of the late singer Amy Winehouse to the National Portrait Gallery in London.

The gallery is set to receive four photographs of Amy from a photoshoot undertaken by the Indian-origin photographer Shergill in 2004.

According to Telegraph India, the photos will be a part of a greater exhibition at the National Portrait Gallery. The collection of images will be dedicated to Winehouse.

The exhibit will be similar to that of the gallery’s current pop-exhibition, ‘Michael Jackson: On The Wall.’ As the biggest pop star of the late 20th century, the exhibit will last until October 21st 2018.

Ram Shergill is an internationally-acclaimed British fashion photographer. Alongside this, he is also the Founder of The Protagonist Magazine which focuses on art and fashion.

His work has been on show at many galleries. This includes the Victoria & Albert Museum in London as well as Somerset House and the Whitechapel Gallery.

Shergill regularly contributes to international editions of Vogue, Harper’s Bazaar, and GQ. And now, his work will also be shown at the National Portrait Gallery!

Ram Shergill explained that an unplanned encounter with Clare Freestone, the curator of photographs at the gallery, led to their acquisition of the photos.

In a conversation with Freestone, Shergill explained to her how he had collected a mound of photographs over the years from a list of well-known celebrities. He said to Telegraph India:

“I mentioned that I had accumulated a body of work which included various iconic stars such as Eddie Redmayne, Dame Judi Dench and Amy Winehouse.”

However, the most attractive set of photos to the National Portrait Gallery seemed to be that of the soul sensation Amy Winehouse.

“They were particularly interested in the images of Amy Winehouse as they were unseen images of Amy. The session took place in my then studio in East London – it was a cover shoot for the Guardian in 2004.

“They used one image and the rest of the shoot was not used. In this session you can see Amy in her original true self and self styled.”

Amy sadly died at the age of just 27 on July 23rd, 2011. Her cause of death was attributed to alcohol poisoning.

The gallery commented on their acquisition of the photos. They said that they maintain “a collection of portraits of the most significant persons in British history, from the earliest times to the present day.”

“The principle for the inclusion of a portrait in the collection is that a person represented should have made, or be making, a substantial contribution to British history or culture.

“The Photographs Collection also acquires portraits and other objects of particular importance to the study of British portraiture, including the work of significant portrait photographers.”

This recognition from the gallery is particularly important for Shergill as he makes his way to becoming a famous and successful photographer. 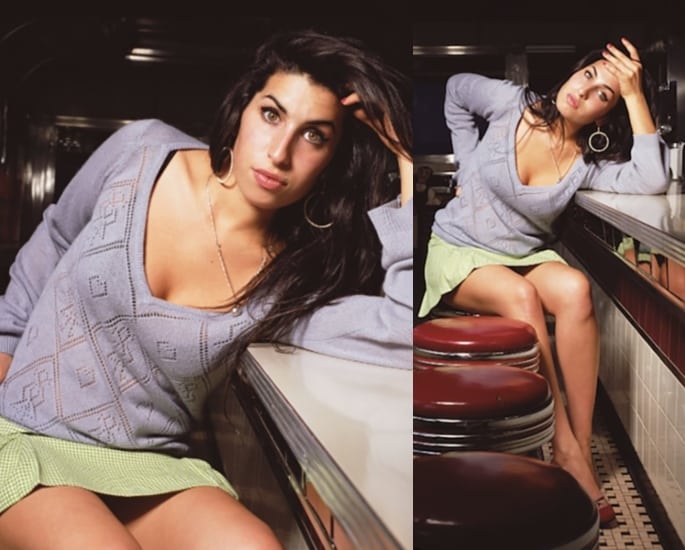 During this time, he has had to overcome cultural barriers in order to be accepted into the industry. Having his work displayed in the National Portrait Gallery is quite an accomplishment.

Ram Shergill adds that his shoot with Amy was special because of her choice to do it in her own styling. He said:

“In this particular session with Amy Winehouse which was just after her success with the album, Frank, Amy specified to me that she did not like the clothes that were available on the rail.

“We then had a long chat in the back garden of my the studio overlooking the river Lea, and I remember saying to her that she was a star and she should only be guided by what she wanted to do, and that the session was about her.

“Therefore she could wear what she wanted, and do what she wanted on her day with me and in life generally, as I wanted to capture the essence of her being.”

Putting the shoot into context, Shergill goes into some evocative detail. He awakens the senses by describing the music that was playing and the strawberry milkshake that Amy was drinking. He said:

“This was just before she became an international superstar with her Back to Black success. I decided not to simply shoot in a studio with a white background, but rather in a 1950’s diner, where she sang to her heart’s content.

“Whilst photographing her we listened to Martha Reeves and the Vandelas, she drank a strawberry milkshake and started to elongate her eyeliner.”

With such an impressive array of celebrity clients, Shergill seems interested in capturing the real heart of his subjects, hidden behind their exterior facade.

He connects with the person standing in front of the camera and as a result, he captures vibrant, stylish and captivating images.

Keep up to date with Shergill’s new work by either following him on his Twitter account or checking out his website where all of his recent work is displayed.

You can also find out more about the current exhibitions at the National Portrait Gallery by visiting their website, here.

10 Most Influential South Asian Authors
Mahtab Hussain: ‘Going Back Home To Where I Came From’