Former two times World Champion Amir Khan and newly turned professional boxer Haroon Khan fought a gang of six men who tried to steal his Range Rover car worth £100,000. The brothers from Bolton travelled to Birmingham, for a concert where famous playback singer and qawwal Rahat Fateh Ali Khan was to perform.

After a night out in Birmingham, boxers Amir Khan and his younger brother, Haroon Khan, were confronted by six armed gang members near their vehicle. The attackers who wanted to steal Khan’s Range Rover, used a 4×4 to block his vehicle. The incident occurred after the brothers returned from a Rahat Fateh Ali Khan concert held at the National Indoor Arena in Birmingham on 7th October 2012.

According to a witness at the scene, both the Khan brothers repeatedly fought back, with the assailants eventually fleeing away empty handed.

It is reported that when one of the attackers had slapped Aamir and cut his lip, the boxer responded back and knocked him down stone cold. It was like a knockout in the very first round.

“Then five of them went for Amir and Haroon but they stood their ground and these guys got dropped one by one,” a witness at the scene of the fight said. It was quite evident that Amir Khan and his brother were defending their property. Apart from smashing the car’s rear window, the Khan vehicle was not damaged any further. All of the six men fled the scene with minor cuts and bruises.

Haroon who is a former Commonwealth Games bronze medallist tweeted: “Found out guy didn’t have no £££ to pay for his shisha so he tried robbin us. Didn’t get far.”

However father of the two talented boxers, Khan senior, was not amused by this whole episode. He felt in such a situation, the two junior Khan’s should have acted more maturely.

“I’ve told them it takes a bigger man to walk away. Let them have the car. But they are OK and everyone is OK.”

“(It was) ‘silly, It happened and it is over,” he said. “In reality, if they wanted the car, they could have it. It’s insured.”

“They are young, they are healthy, silly things happen, silly people are out there,” he added.

Amir Khan who is a sporting role model for those involved in youth crime should lead by example. He does not want to attract any negative publicity leading up to his next fight, especially after a series of consecutive defeats, which have halted his career. 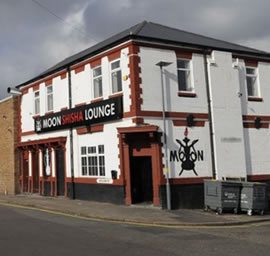 West Midlands police confirmed reports of a disturbance in Adelaide Street at 1.23am, but no arrests were made.

A spokesman said: “Police were called to Adelaide Street, Birmingham, at around 1.23am on October 8 to a report of a fight taking place. Officers arrived within minutes but found no sign of any disorder and received no reports of any offences having been committed. Police left the scene a short time later.”

Not for the first time, Amir Khan has previously been involved in controversial incidents outside the boxing ring. In 2007, he received a driving ban with a fine for careless driving. In the very same year he was summoned to court for a speeding offence and in 2009 he was yet again involved in a motor relating incident when his car collided with a young cyclist. 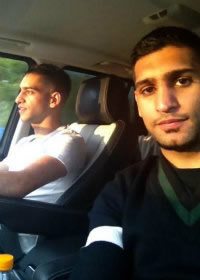 At a press conference held on Tuesday in London, Khan’s promoter, Golden Boy Promotions, confirmed that his next fight will be against Carlos Molina. Following a clash with six yobs on Monday night, Boxer Amir Khan was present at this important news event.

Khan now under new trainer Virgil Hunter, desperately wants to reclaim his world light-welterweight title. He has also pledged to guide his younger brother to a world title. Haroon tipped by his big brother as a future champion will make his professional debut on 1st January 2013 in Manchester.

Both brothers will be hoping for a much smoother build up to their respective fights and this time beat their opponents in the ring.This is a good lesson for others that when anyone weak tries to knock you back, to return the favour by acting more responsible. You can leave the tough act for another day, in this case inside the boxing ring.

UPDATE
There has been another twist to this story. A masked man wearing a blue hoody has posted a bizarre video on social networking sites claiming to have attacked Amir Khan because he sided with the British Army. In an online message on YouTube the man has ridiculed the boxer using inappropriate language.

The young man in the video has warned Khan to stay away from Birmingham; otherwise face the consequences. Eyewitness reports suggest Amir Khan was showing off and annoying members of the public at the concert, which eventually led to this clash near his vehicle. The attacker allegedly punched Amir Khan, and stole some of his personal belongings, before returning some of them back.

West Midlands Police are continuing their investigation of the incident.

Faisal has creative experience in the fusion of media and communication and research which increase awareness of global issues in post-conflict, emerging and democratic societies. His life motto is: "persevere, for success is near..."
Human Trafficking in the UK
Chicken Supplier admits Cleaning with Y-Fronts