Thieves, Robbers and Burglars to have GPS Trackers

As part of a new scheme, prolific thieves, robbers and burglars are to be tagged with GPS trackers in a bid to stop them reoffending.

"They just took the most expensive items"

Burglars, robbers and thieves are set to be tagged with GPS trackers in a bid to reduce their chances of reoffending.

Under a Ministry of Justice (MoJ) pilot, offenders will be automatically tagged for up to one year after being released from prison.

Police forces in Gwent, Avon and Somerset, Cheshire, Gloucestershire, Humberside and the West Midlands will be taking part.

The MoJ stated that tracking offenders 24 hours a day would act as a deterrent.

It estimated that 250 offenders, who have served a year in prison, will be fitted with the tag in the first six months of the scheme, as part of their licence conditions.

Police will be able to cross-reference the GPS data with reports of new thefts, robberies and burglaries to see if offenders were in the area at the time.

In December 2020, burglars raided Diane Titmus’ hair salon, stealing around £2,000 worth of stock as well as hairdryers and straighteners.

The break-in was the 12th time the Newport salon had been broken into in 30 years.

Ms Titmus said: “They just took the most expensive items, they knew what they were doing.

“The first time it happened was some years ago. I came in on the Christmas weekend, our biggest weekend, they had taken every single item.

“I had to run around to all my friends and borrow dryers, scissors, just to be able to work that day.

“I was really very, very upset, but also angry. How dare they? I worked really hard all my life to have this, just for someone to come in and take it.”

Ms Titmus revealed it happened so many times she no longer made insurance claims because of the increase it would mean to her premium.

She continued: “Other times they’ve cost me £500 when they break a window and they probably had about 30p in pennies that were left in the drawer.

“We just have to write it off as a loss. We work hard for a week to pay the burglar – that’s how it works out.”

Due to the Covid-19 pandemic, thefts and burglaries in England and Wales fell because many people stayed at home. 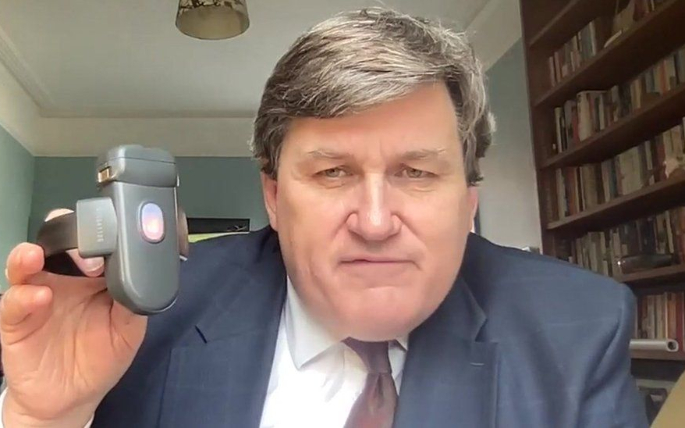 Minister for Crime and Policing Kit Malthouse said that the tracking pilot was “critical” as it is expected that levels will return to those seen before Covid-19.

“We want to make sure we help those offenders get back on the straight and narrow.”

“We think 24-hour-a-day supervision, through this tag on their ankle, will help them to realise that they’re effectively being watched, and therefore choose something else to do, other than go back to their former crime.

“It’s a rigorous supervision in a way that we haven’t really seen before and we think it will have a big impact.”

According to MoJ figures, over 50% of those convicted of theft re-offend within a year of being released.

These types of crimes cost the public an estimated £4.8 billion a year, yet 79% of theft cases and 62% of robbery cases resulted in no suspect being identified, compared with an average of 24% in all other cases.

Following the pilots, the MoJ said it planned to roll out the scheme to a further 13 forces in September 2021.

Tags have already been introduced in parts of England and Wales to monitor where offenders who were convicted of committing crimes while intoxicated, have been drinking.

Sobriety tags monitor the wearer’s sweet levels every 30 minutes to see whether they have consumed alcohol.

If they have, the probation service is then alerted.

She said: “Offenders tend to be serial offenders doing quite a lot of these types of crime over a short period of time, that can be very forensically aware, they can locate premises that aren’t overlooked so there aren’t any witnesses and then it becomes very difficult to pull those clues together to solve that particular crime.

“Obviously with the ability to be able to tag our persistent offenders it means we’re able to see where they are and if they’re in proximity of offences that have occurred.”

Dhiren is a journalism graduate with a passion for gaming, watching films and sports. He also enjoys cooking from time to time. His motto is to “Live life one day at a time.”
Indian Brother killed Elder Sister in Public for Love Affair
Indian Daughter seeks Help due to Mother’s Affairs with Men