India orders Panic Buttons and GPS on all Mobiles

As a way of protecting women and young girls, India has sanctioned that all mobiles as of 2017 will have a panic button installed.

As of 2017, all new mobile phones that are sold in India will be required to have a panic button that allows users to make emergency calls.

This aims to combat the looming threat of sexual violence against girls and women. By 2018 there will be an in-built GPS navigation system in place.

This announcement by Ravi Shankar Prasad, India’s minister of communications and information technology is a means to improve the safety of women in a country that is strife with harassment and assault.

The numbers 5 and 9 will work as panic buttons in smartphones at the moment, however manufactures will need to introduce a new button or feature made solely with the intention of sending emergency alerts.

Users will be able to make these calls by either pressing the numbers 5 or 9 for a long time or by pressing the power button on and off three times.

Although Apple and Samsung have not made a public statement on these new laws, they will legally have to follow these new rules and introduce software updates for every phone sold in India.

Ravi Shankar Prasad said in a statement: “Technology is solely meant to make human life better and what better than using it for the security of women.”

This groundbreaking change was first suggested by Maneka Gandhi, India’s minister for women and child development.

The issue of rape and assault is huge in India, the Government reported that every 30 minutes there is a rape in India.

This panic button feature would save a lot of people, however this could negatively affect companies that build cheaper phones in India.

This is because many of the phones that are sold cost less than $20 (approximately £14) and they are not built to support features like GPS. These kind of changes could rapidly increase the cost of mobile phones in India.

Although this new requirement for smartphones will help a lot of women in the streets, this feature is already available on many apps.

An analyst at International Data Corporation, Kiranjeet Kaur wrote in an email to The New York Times and said: “There are a few apps that can be used on smartphones that serve the same function as a panic button.”

“The Uber app in India has a SOS button, too. There are a couple of third-party apps, too, like the bSafe app. Motorola smartphones in India come with an emergency button option.”

With India’s problem of sexual assault being on the rise and publicly shown on social media, companies have taken advantage by creating services to keep people say, but at a price.

A subscription-based service called One Touch Response creates a service that will send employees to escort people home and help them when they are notified either by a phone call or their app.

The founder, Arvind Khanna wrote in an email, that the problem of safety in India created a market of $5 billion that is growing every year by 20%: “We currently serve over 35,000 paid subscribers along with hundreds of ‘Pay As You Go’.

“Over 40 percent of our users are women.” 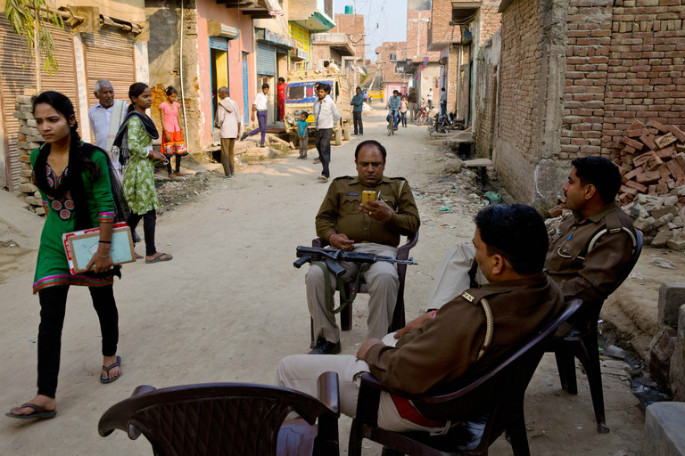 Despite the fact that India has one of the fastest-growing markets for mobile phones, there are still areas where women can’t carry or use them.

Earlier in 2016, many villages in western India instituted a ban on women and girls from using mobiles as they believed that they inhibited them from studies and created opportunities to elope.

President of the local council, Ranjit Singh Thakor said: “Let them study, get married, then they can get their own phones. Until then, they can use their father’s’ phones at home, if necessary.”

Indian women who report their assaults are facing huge problems, like the understaffed police forces and corruption in their system which prevents the rapists and attackers from facing justice.

A human rights lawyer in New Delhi, Vrinda Grover said: “If you’re a woman in distress, the last thing you want to do is go to the police.”

Although there is no national helpline number in India, the panic button will certainly help more women out there by providing the emergency assistance that they desperately need.

Images courtesy of CNN, The Stack and New York Times.