Human Trafficking in the UK

Human trafficking is a growing problem in the UK. Recent cases have highlighted this issue but it is merely scratching the surface in regards to the deplorable act. We take a look at the different aspects involved to develop a further understanding of this heinous crime.

Human trafficking involves an act of recruiting, transporting, transferring, harbouring or receiving a person through the use of force, coercion or other means, for the purpose of exploiting them.

Human trafficking is the fastest growing form of international crime and the second largest illegal trade in the world after drugs. When the words human trafficking are uttered many of us conjure up images of third world countries where people are being enslaved however this ongoing problem is closer to home than many of us think.

Bonded labour, also known as debt bondage, is the least known form of trafficking yet is the most widely used method of enslavement. Victims become labourers where manual labour is required as a means of payment of a loan. The value of the work carried out is usually a lot greater than the original sum of money ‘borrowed’ due to no terms or conditions defined initially. 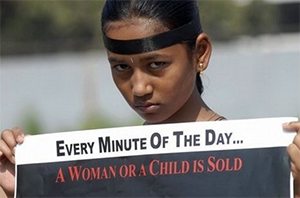 India has the highest rate in the world for this type of labour where sometimes before a child is even born, they, along with their family generations can be forced to serve families who their father’s may ‘owe.’

Forced labour includes domestic servitude, agricultural labour, sweatshop factory labour, food service industry and begging. Here victims are often forced to work against their own will under a threat of violence or similar form of punishment. Freedom is restricted and a degree of ownership is exerted to control the victim.

Sex trafficking victims are usually from dire circumstances so easily targeted by the traffickers. Circumstances include homeless individuals, runaway teens, displaced homemakers, refugees, jobless people, tourists, kidnap victims and drug addicts. Fake jobs and lucrative opportunities of a better life are a popular way to entice girls from poor backgrounds who then end up in prostitution. 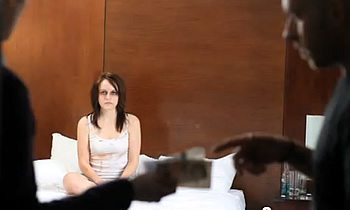 Traffickers are also known as pimps or madams who exploit these vulnerable people, which tend to be mainly girls and women.

Child labour is a form of work which interferes with a child’s social development and it’s education either physically, mentally or morally. Children are exploited in the many ways including debt bondage, prostitution, pornography, slavery, servitude, trafficking for early marriage and for the drug’s trade. Trafficking of children often involved exploiting the parents’ extreme poverty whereupon they may sell the children to pay off debts/gain income or they may be deceived into believing prospects of a better life/training for their child.

Human trafficking differs from people smuggling. In the latter, people voluntarily request or hire an individual, known as a smuggler, to covertly transport them from one location to another. This generally involves transportation from one country to another, where legal entry would be denied upon arrival at the international border. There may be no deception involved in the (illegal) agreement. After entry into the country and arrival at their ultimate destination, the smuggled person is usually free to find their own way.

Throughout 2012 various cases have arisen throughout the UK highlighting issues within the Asian community. 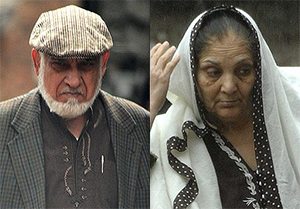 The first case was in February involving a deaf girl in Manchester who was kept as a slave for almost a decade before escaping. The youngster was between 10 and 12 when she was trafficked into the UK to serve a husband and wife (Ilyas Ashar, 83 and wife Tallat Ashar, 66) as their slave.

The disabled girl was forced to sleep on a concrete floor in the cellar with no sanitation, little food and no pay. In the cellar she was given the task of packing football shirts, clothes and mobile phone accessories as well as her other duties including cooking, cleaning, washing, ironing and washing cars belonging to friends and families of the Ashars’.

Since the girl could not read or write and had no family or friends in the UK to reach out to for help, she was completely unknown to the outside world. She had never been school in Pakistan or Britain and was only able to communicate via hand actions- the very basic of sign language and not the formal skills taught had she learnt. Mrs. Ashar was also alleged to have hit the victim on numerous occasions for minor issues.

The house was searched after an enquiry into benefit fraud in 2009 where the girl was found asleep in the cellar. Ilyas and Tallat Ashar both deny two counts of human trafficking into the UK for exploitation and a single count of false imprisonment. Ilyas also denies 12 counts of rape, Tallat denies one count of sexual assault and unlawful wounding, and the pair along with their daughter Faaiza, 44, deny charges of benefit fraud. The case continues. 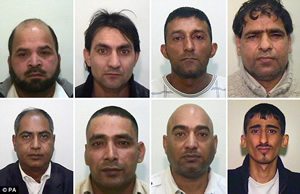 In May 2012, a group of Asian men known as ‘the Rochdale sex trafficking gang’ were arrested on suspicion of sex activities with a child. The nine men convicted were all British Pakistanis except for one Afghan and the girls were white which led this case to be believed as racially motivated.

Nazir Afzal, the newly appointed Chief Crown Prosecutor decided to bring the case to trial, stating that gender, not race, was the key issue: “There is no community where women and girls are not vulnerable to sexual attack and that’s a fact.” The majority of the men were married and well respected within their communities with one even being a religious studies teacher at a mosque and a married father of five children.

Abuse began in 2008, centred around two takeaways in Heywood, Rochdale, where victims were plied with alcohol, food, drugs and gifts to appease them whilst they were passed around the group for sex.

The nine defendants were jailed for a total of 77 years, with the ringleader Shabir Ahmed, a 59-year-old man from Oldham, receiving a 19-year term after being convicted of two rapes, aiding and abetting rape, sexual assault and trafficking for the purpose of sexual exploitation.

If anybody know’s of such horrid crimes taking place or is simply interested in getting involved to help their community, here are some helpful websites: Stop the Traffik and The UK Human Trafficking Centre (UKHTC), to help with this.

Social network sites also have many NGO’s where people can get involved by ‘liking’ the pages or adding them through their profile pages.

Human trafficking is a serious crime and a gross violation of human rights. It is classified as a modern form of slavery and occurs all over the world including, here, in the UK. Highlighting this issue helps raise awareness and aids in combatting this complicated global problem.

Sasha is a fashion graduate/model with a passion for reading, writing, arts, culture, theatre and philanthropy work. She is inspired by ‘BE the change you want to see’ and firmly believes that ‘Education is knowledge and knowledge is power’.
Changes to the UK Immigration Test
Amir Khan and Haroon beat Car Thieves