Will ‘Shameless Proposals’ rise up to Pakistan’s Rishta Culture?

Sadia Jabbar’s ‘Shameless Proposals’ is a web series that will expose the toxic Rishta culture in Pakistan. There are contrasting views on this subject.

"There couldn’t be a better objectification of a desi female"

‘Shameless Proposals’ is an online animated web series by Sadia Jabbar, which will explore the questionable Rishta culture in Pakistan.

The series will apparently address the stereotypical domination that women and young girls face in Pakistan. This is especially in relation to proposals that come their way, including the process of arranged marriages.

The series will specifically highlight how some women sacrifice their happiness as they virtually have no choice when it comes to marriage.

The web series is debatable for many. The liberals feel it is forward thinking in exposing the historical Rishta culture in Pakistan.

Such open-minded people feel that producer and director Shoaib Mansoor has been at the forefront of women eccentric Pakistani cinema with films like Bol (2011) and Verna (2017).

Hence it is only natural for Jabbar to continue this trend on a digital platform.

However, there are others who feel ‘Shameless Proposals’ can be very damaging to Pakistani culture.

Those who are sceptical believe the web series may lead to more women remaining single or eventually getting a divorce. 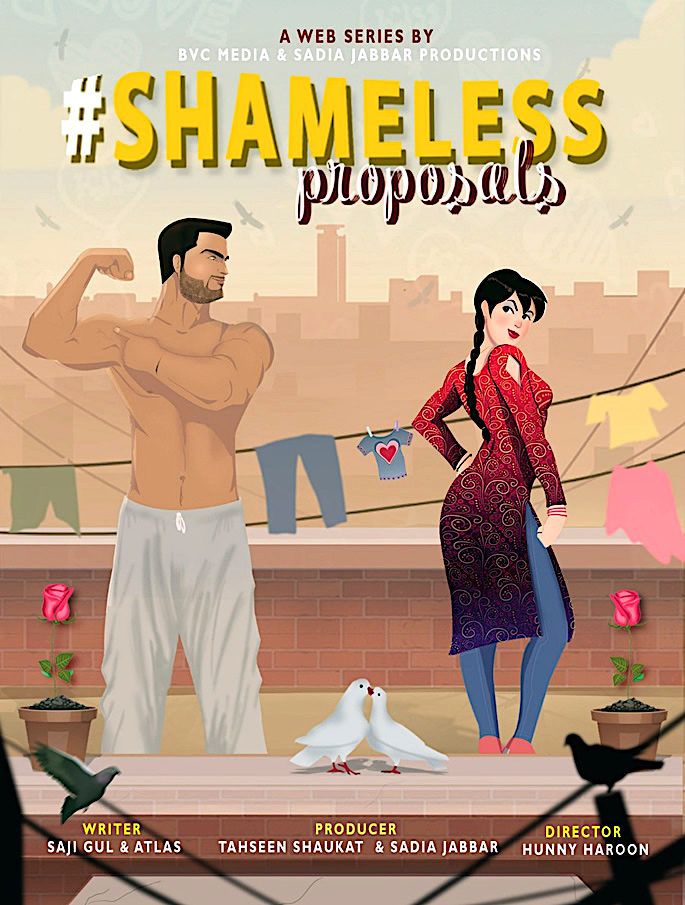 ‘Shameless Proposals’ is co-produced by Sadia Jabbar, CEO and Creative Director of Sadia Jabbar Productions. The web series is a joint collaboration with BVC Media.

Tehseen Shaukat co-produces ‘Shameless Proposals’ with Saji Gul and Atlas being the writer. Hunny Haroon is the director for this digital venture.

The seven-part web series is to expose how desi marriage proposals can be awkward and hurtful to women or girls.

“The theme of Shameless Proposals is to deal with the objectification women in a desi society by presenting them as products when a proposal is considered for an arranged marriage.

“The web series also sheds light on how parents would agree to almost every condition by the boy’s family in order to ‘accept’ their daughter.”

“This is the background we have chosen to highlight this pertinent issue. Shameless Proposals seek to explore seven different types of proposals through the lens of arranged marriages.” 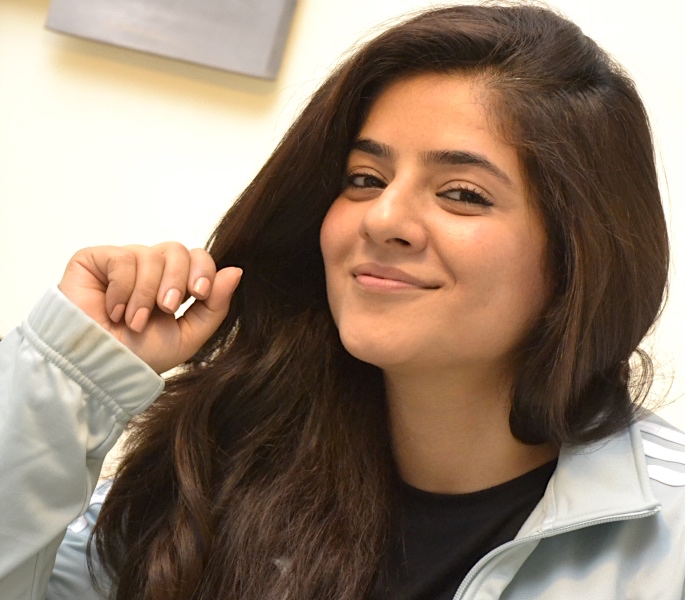 In addition, the Balu Mahi (2017) producer said the forthcoming animated series will tackle the conventional image of women in Pakistani society:

“One more thing that we have discussed is how Pakistani women of today refuse to be succumbed into silence. She wants to raise her voice.

“If we talk about arrange marriages now, girls wish to have their say in the matter. They would inquire bigger questions.

“They would rather turn down an offer to marry someone who would just want to spend their life based on how they look.”

Sadia claims that women nowadays want to find a life partner with a similar mindset and ideology. According to Jabbar online provides a unique platform for producers such as her.

“I believe web series is a brilliant initiative for people to discuss social issues. They can be used to raise their voice.

“The television shows are limited to a certain audience. Theatre and feature films have a different genre. Web is free of such restrictions.”

“Web series, however, is a very good window since its budget friendly

“The digital platform has become a medium of immediate release worldwide and we are just warming up to the potential it promises.

“Pakistan has just stepped in this medium. Yes, people are working on it but we haven’t completely explored this avenue.”

With shoot for the web series beginning, Sadia went on twitter to post a few images and tweeting:

There has been no official announcement about the lead and supporting characters featuring in the web series. 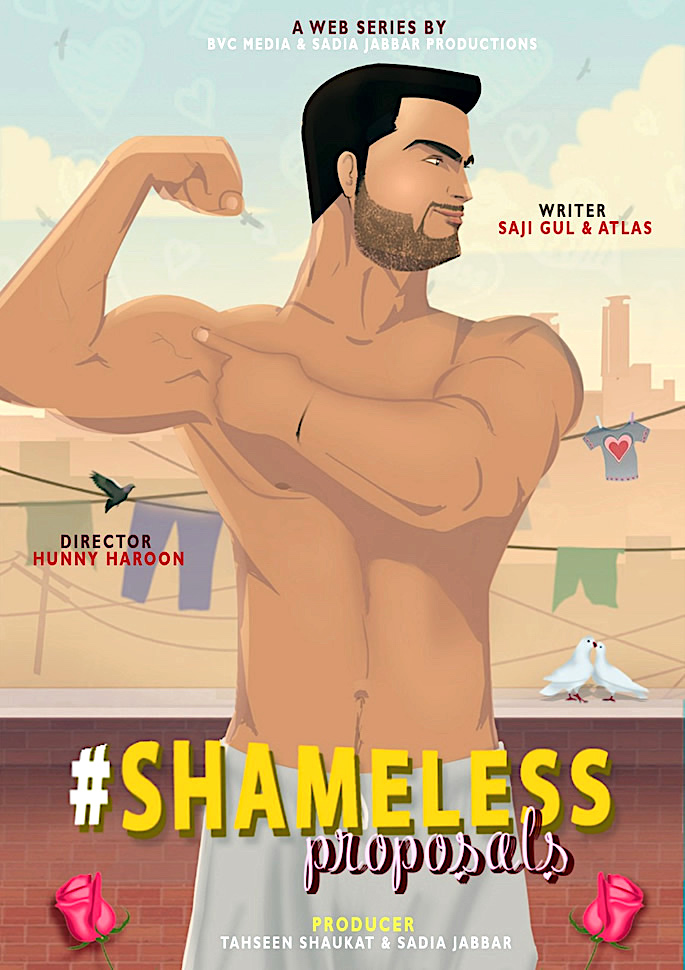 Post-announcement, there have been conflicting views about ‘Shameless Proposals’ with some in favour and others raising their eyebrows.

Some broad-minded people feel this series will actually encourage women to uprise and not remain quiet against this widespread culture.

In other words, ladies should decide where they want to marry, giving them the option to reject any potential Rishta.

For others, it is a worrying sign as they feel by encouraging women to revolt against an arranged marriage, it will have a negative impact on Pakistan’s Rishta culture.

“‘Parents would agree to almost every condition by the boy’s family in order to ‘accept’ their daughter’ this does not happen in majority cases now, please stop making money by showing our culture in bad way.”

There is a small minority who are also sitting on the fence, including one reader who states:

“I had an arrange marriage and my husband is definitely far better than any person I have ever met in my entire life.

“But yes this proposal thing s**** big time, I remember how humiliated I felt when I was presented in front of bunch of people.”

There has also been a mix response to images of the web series available on social media.

In the title cover, there is an image of a male showing his muscles, whereas there is also a gutsy woman who seems to be counteracting him.

Fans of Sadia Jabbar feel these images reflect a positive representation as they empower and promote women in Pakistan.

“There couldn’t be a better objectification of a desi female than the one in the cover.” 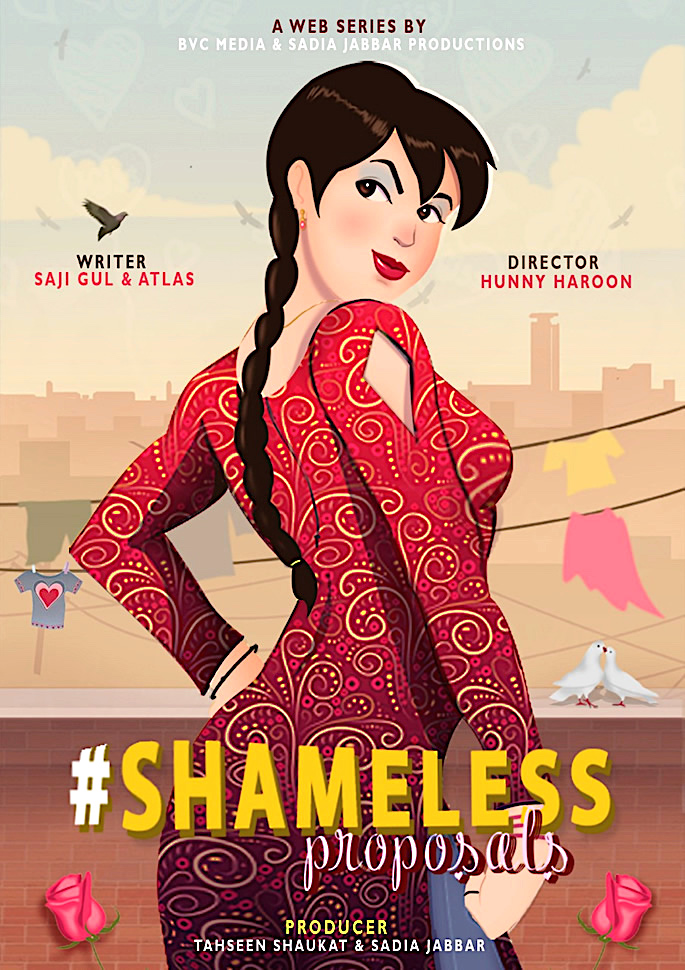 But the conservative elements of Pakistani society see the images as controversial.

The traditionalists think such portrayals will intensify divorce rates in Pakistan which have rapidly increased.

A study carried out by the Gilani Research Foundation in 2017 reveals that 78% of people feel that the divorce rate is on the up in Pakistan, whilst only 22% think it is going down.

Some individuals in Pakistan will always be cautious about women taking decisions and dictating men. They also blame the liberals for the many women who remain single.

They argue men marrying twice is often presented negatively as opposed to having a girlfriend or someone who is unmarried.

“If a man marries once, what will happen to all the women who cannot find a husband? Do they not become public property?”

These questions perhaps may be alluding to the 2017 census as results indicate that there is a bigger male population in Pakistan in comparison to women.

Additionally, conventionals argue Pakistani culture is already such that women are tying the knot late. They believe many late marriages are not even lasting.

Opponents of Jabbar feel that she is giving too much empowerment to women as experienced previously.

In Sadia Jabbar’s film Balu Mahi, the hero Balu (Osman Khalid Butt) tries to break a marriage, with the heroine Mahi (Ainy Jaffri) taking the opportunity to run away.

Critics of Jabbar feel her work shows a culture of broken relationships and misunderstandings.

They think the digital medium can potentially destroy the family system of Pakistan.

The traditionalists are also of the opinion that some sectors of the Pakistan media are usually presenting the mischief liberals. 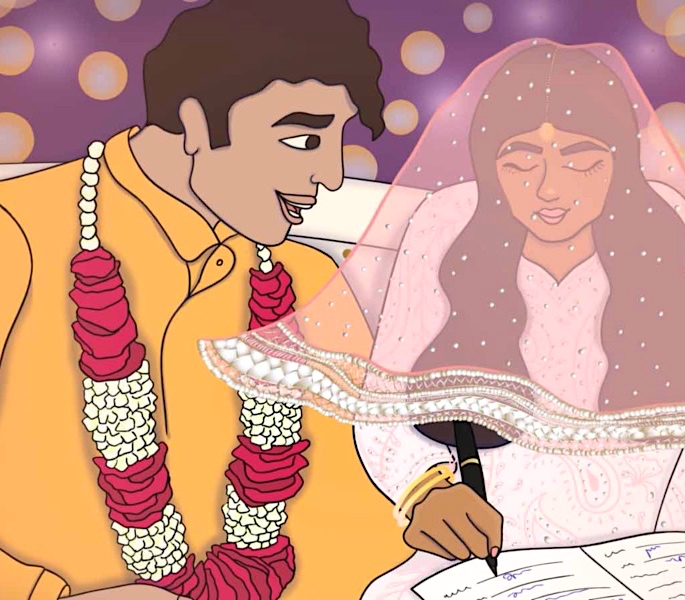 Besides Sadia, Sharmeen Obaid-Chinoy has a series of 14 short animated videos that reflect issues facing women in Pakistan.

In addition, filmmakers Jami Mahmood and Wajahat Rauf are also working on their respective web series.

Meanwhile, despite the different views and reservations about ‘Shameless Proposals’, it is too early to predict the final outcome of this digital web series, which aims to initiate a social change.

Images courtesy of Brides & You and IMDb.