Amir Khan Challenges any Boxer in India to Beat Him!

At Pakistan’s Wagah border, Amir Khan challenges any Indian Boxer to beat him. Amir also got himself into an awkward position when questioned about Faryal.

During a trip to Wagah border in Pakistan, British boxing hero Amir Khan challenges boxers from India, including Vijender Singh to beat him in the ring.

No stranger to Pakistan and controversy, the boxer from Bolton was also put in an embarrassing situation by a local reporter.

Despite wife Faryal Makhdoom and father Shah Khan being present with him, he was asked about issues surrounding his marriage and lots more.

Amir who has family roots in Pakistan regularly visits the country to help improve the lives of people and communities. The former Olympic silver medalist also has many Pakistani friends from the world of sports, music and entertainment.

On Monday, October 29, 2019, Khan made a visit to the Wagha border near India with his wife Faryal and dad Shah.

Amir who enjoyed his time at the border posted an image on Instagram with all smiles. Alongside the image, he wrote:

“Had a lovely time at wagha boarder with @faryalmakhdoom@ishfaq_farooq and my dad. What an experience. Thanks to Pakistan rangers and boarder control #Lahore #waghaborder.” 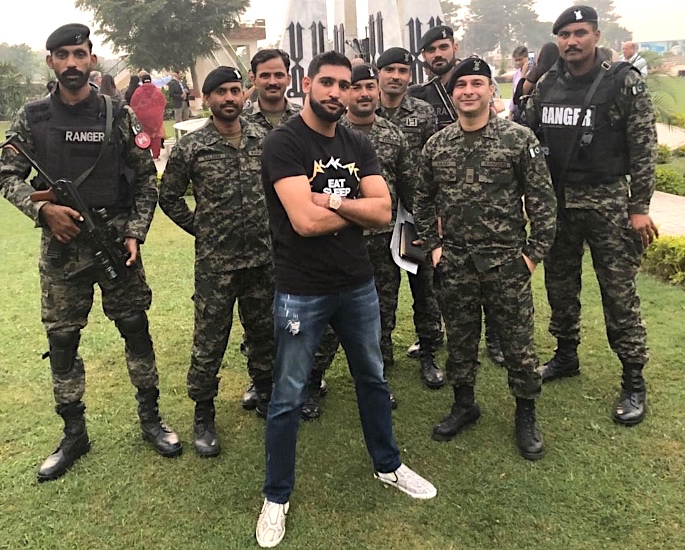 Following the visit, the multi-millionaire sportsman spoke to the press responding to many things, including controversial issues.

Let’s take a look at the main talking points, while Khan was addressing the media in broken Urdu and English:

The boxer wants to open an academy in Lahore, having established the Islamabad Boxing Academy in August 2016.

Amir claims he was promised by former Prime Minister to construct an academy for him in the historic city.

But this did not bear fruit, with a new government in place.  On this he adds saying:

“I can only do what I can. I am sitting in the UK and train in America. Whenever I come here [Pakistan], I try to use my time to help as many people as I can

“But it is very difficult because the politics is changing, the parties are changing.”

Khan wants Pakistan to produce more boxing champions. To do this, he has plans to begin a boxing league in the country, possibly along the lines of a similar backed league in India.

In June 2018, Amir launched the Super Boxing League in Karachi with Indo-British entrepreneur Bill Dosanjh. Being optimistic for Pakistan and shedding light on the boxing league project in the country, Khan says:

“I want the best for Pakistan. Whatever I can do. That’s the reason I am starting a boxing league in Pakistan.

“So we can produce champions. And the boxing league is starting in 2019, March.”

Influence of Imran Khan on Sport

With Prime Minister Imran Khan coming from a sports background, Amir is hopeful that the former cricket legend can play an important role to promote boxing in Pakistan.

When asked by a reporter on what message he would like to send Imran about the boxing talent in the country, Khan replied positively:

“My dream was always to make an Olympian and World Champion out of a boxer from Pakistan. Imran is also a world champion cricket player.

“And I really believe that he knows how hard it is to become a champion. We need this country to be behind the fighters. That’s why I feel Imran is the best Prime Minister for our country to take sport forward.” 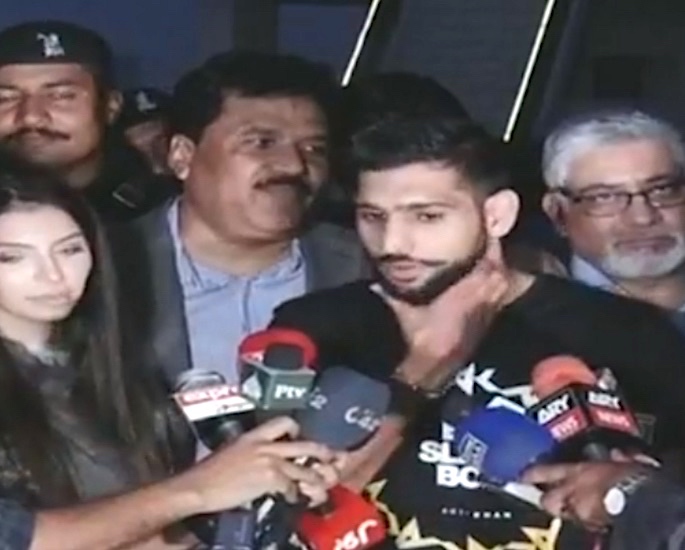 The press then began to hot up the talk with Amir. While asking a question, a journalist commented that although Khan seemed happy with Makhdoom, the British media did not hold back with all the drama affecting his marriage.

Amir quickly went off colour and said: “Everything is good.” Suddenly, Amir slightly found off guard by the awkward question started to scratch his beard, using both hands.

In response to a question about if this was planned, a disturbed and discomforted Khan added:

“In life, we all have ups and downs. We win some, we lose some. We are happy with life. Life is good, family life is good, the family is good.

“I am happy to be in this position where I’m a fighter in the ring. But outside the ring, I am a loving husband.”

The interesting aspect is that Faryal standing nearby laughs towards the end of his answer. But along with his father, she is straight-faced about the question, while Amir answers it.

The final punch came right at the end from Khan. Standing very close to the Indian border, Amir gave an open challenge to boxers from India to try and defeat him. He probably said this knowing that no one from the neighbouring country could beat him.

In reply to a question about the challenge given to him by India’s Vijender Singh, Amir was quick to dismiss his opponent:

“He challenged me, but he does not want to fight me. He said he will fight Amir, but when it comes down to signing the dotted line and let’s do the deal, he did nothing.

With the media talk ending, Faryal can be seen chewing and taking pictures using her phone.

In the end, Amir is presented with a small souvenir by the Pakistan Army. He describes the gesture as “amazing.”

Even though the media address in Lahore only lasted barely 3 minutes, a lot of interesting points came out of it. Not forgetting his open challenge to India’s boxers to fight and beat him.

During this rendezvous with the media, Amir went from casual to serious, before ending the talk with some overconfident banter.

Virat Kohli is Fastest Batsman to get 10,000 runs in ODI Cricket
It’s a Baby Boy for Sania Mirza & Shoaib Malik!