"I feel very proud that at the twilight of my career finally, I managed to win the World Cup.”

Former Pakistan sports legend Imran Khan is one of the greatest cricketers of his generation.

Being the biggest heartthrob in Pakistan, he gave cricket in the subcontinent real sex appeal across two decades – in the 70s and 80s.

Similar to politics, his entry in international cricket went from average to sensational. He finished on a very high note, impressively taking over 300 Test wickets.

Imran was a highly charismatic captain who led his country to World Cup glory in 1992. But more importantly, he was an exceptional fast bowler and one of the finest all-rounders that the world has seen.

His sphere of influence exceeds far beyond the cricket pitch and personal statistics. Khan’s impact on Pakistan and global cricket are amongst the very best in the history of the game.

With Imran becoming the 19th Prime Minister of Pakistan, DESIblitz takes a look at 5 top moments from his cricket career:

What better way to round off your cricket career by leading your country to World Cup victory in 1992? The inspirational Khan and his Cornered Tigers were crowned champions of the world after defeating England by 22 runs in Melbourne on 25 March 1992.

Imran was very instrumental for this ultimate achievement, especially having introduced the attacking trio of Wasim Akram, Mushtaq Ahmed, and Inzamam-ul-Haq.

From the brink of being eliminated, they won 5 consecutive matches to lift the coveted trophy.

In his farewell appearance, Khan was the top scorer with 72, whilst his protégé Wasim bowled two of the most magical and unplayable deliveries in the history of International cricket.

At the post-match ceremony a jubilant Imran said: “I feel very proud that at the twilight of my career finally, I managed to win the World Cup.”

Khan could not have asked for a better finish to his illustrious career.

During his tenure as captain, Pakistan successfully beat arch-rivals India in the 5th and final Test to claim a famous 1-0 series victory.

Hence Pakistan won their first Test series on Indian soil after defeating India by 16 runs at the M. Chinnaswamy Stadium. This was Pakistan’s third overseas win at the time.

In a low scoring intense affair, Imran’s captaincy was brilliant. He handled his spinners well, with Tauseef Ahmed and Iqbal Qasim ripping apart the Indian batsmen. They both took 9 wickets each in the match.

The win was a dream come true for Imran and all his countrymen worldwide. Furthermore, it was probably the most pleasurable and historic victories under his leadership.

“Imran’s sporting approach to the niggling problems, which occur on a tour of India helped keep matters from getting out of proportion, including those instances when his own colleagues were guilty of over-dramatisation on the field.”

Khan was awarded the man of the series for his all-round performances and astute captaincy. 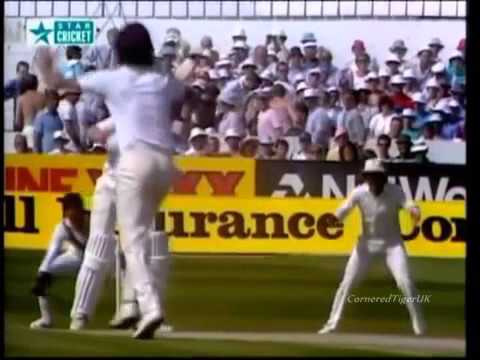 Skipper Imran led his side to their first Test series win in England.

With a unique and swinging action, he took 10-77. This was a domineering display by Khan in the decisive 3rd Test win over England at Headingley.

He claimed 3-37 in the first innings and 7-40 in the second. Thus Pakistan won the match in Leeds by an innings and 18 runs. Imran was the universal choice for player of the match.

Khan also achieved his 300th Test scalp on the third day of this Test match.

Imran spoke to the media about the tour saying: “That tour gave me a lot of satisfaction. England was on a high. Mike Gatting had just won the Ashes, beating Australia in Australia. I mean the team was on the up.

“We struggled in the first two matches. We weren’t really on top. England were doing well. And to suddenly come back and win the third Test.”

“And then the team just lifted themselves and we had confidence in ourselves.”

As a result of Headingley, Pakistan went onto to win the 5 matches Test series 1-0 against their former colonial rulers.

4. Overpowering the Mighty West Indies in 1988

#OnThisDay in 1988, Pakistan became the first visiting team to win a Test in the Caribbean for ten years when they beat West Indies by nine wickets in Guyana. Imran Khan took 11 wickets and Javed Miandad made a marvellous 114. #PAKvWI pic.twitter.com/DDW54j2lfi

Upon the insistence of General Zia-Ul-Haq, Khan came out of retirement to play on the 1988 tour of the West Indies.

Despite suffering from a toe niggle, Imran made his return to Test cricket with some imperious bowling. His 7-80 set the tone for the remainder of the match.

In an era when the West Indies were unmatchable, Khan had the edge as his team beat the home side by 9 wickets in Georgetown, Guyana. He ended with match figures of 11-121 and was the unanimous pick for man of the match.

With this victory, Pakistan became the first team to win a Test match in the Caribbean in over a decade. Imran who took 23 wickets was given the man of the series award.

Had it not been for the dubious local umpiring, Pakistan would have comfortably won their first Test series in the West Indies. This prompted Khan to call out for neutral umpires in Test Cricket.

Imran guided Pakistan to their first major One Day International (ODI) title, with a 4 wickets win against West Indies in the 1989 Nehru Cup final.

With the exception of New Zealand, the entire Test playing nations participated in the tournament. The event took place as part of the centenary celebrations to mark the birth of India’s first Prime Minister, Jawaharlal Nehru.

In a close contest, Wasim smashed a six off the penultimate ball to take Pakistan over the winning line at Eden Gardens, Kolkata.

Khan who bagged 3 wickets and remained unbeaten on 55 was declared man of the match. Once again he showed his all-round class on the field of play. He also received the player of the series award.

Other unforgettable moments from his career include 12 wickets routing of the Australians in the 1977 Sydney Test, 1986 Austral-Asia Cup victory and the 191-runs crucial partnership with Wasim Akram at Adelaide Oval in 1990.

Having such a fantastic career, he has a tremendous following all over the globe. His cricket journey ended with 362 wickets in Test cricket and 182 in ODI cricket.

As a cricket star turned popular politician, people love him, admire him and emulate him.