Players can often lose their temper during a match on a cricket field. DESIblitz showcases 6 top moments of an angry Virat Kohli.

“Kohli pushes the line with umpires and officials."

Without a shadow of a doubt, Virat Kohli is one of the best batsmen in world cricket history.

However, Virat is not always as calm. He has a reputation for being aggressive and getting annoyed very quickly.

Virat’s temperament has at times gone on to enhance his performances. But many believe his behaviour is inappropriate.

He has demonstrated his aggression whilst touring countries in Australasia and the African continent. He has also vented his anger against fellow countrymen.

We look at 6 instances when an angry Virat Kohli lost his cool on a cricket field. 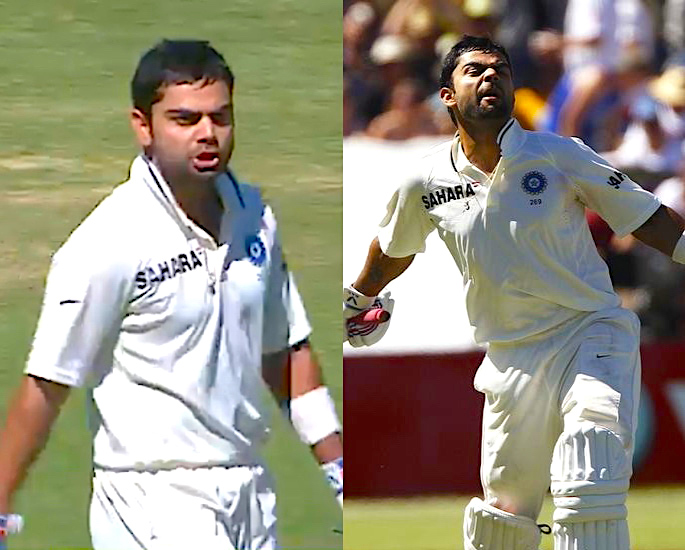 Virat Kohli had anger issues from his early cricket days, especially in the fourth Test, during the India tour of Australia.

On his way to his maiden Test century, the angry Virat Kohli began riling players from down under at the Adelaide Oval, Adelaide.

His first hundred was certainly not plain sailing with some drama along the way.

When on 99, Virat was looking for a quick single in the 89th over, which was not there. Thus, he had to turn back and dive into his crease.

Thereafter, an aggravating situation began, as Virat had verbal arguments with the Australian players. This includes various words and gestures.

But after the intervention of Aussie skipper, Ricky Ponting things became calmer. Ricky had told Virat to get on with his game.

A member from ESPNcricinfo who was doing LIVE text commentary wrote:

“Some verbals between Virat and some Australian fielder during the changeover, Ponting steps into the breach to calm down matters”

Whilst, this was the main outburst, Virat did not just stop there. He took out his frustration further after reaching a hundred.

He went on to show a lot of emotion towards the home players, slamming his bat in the air. His face said it all. He was unable to let go of the previous incident.

Virat’s eyes had a lot of venom after pushing the ball through the covers to make a hundred.

Though Virat (116) did not last long after his century, falling lbw to fast-medium bowler Ben Hilfenhaus.

To rub more salt to the wounds, Australia was triumphant by 298 runs, claiming a 4-0 Test series win. 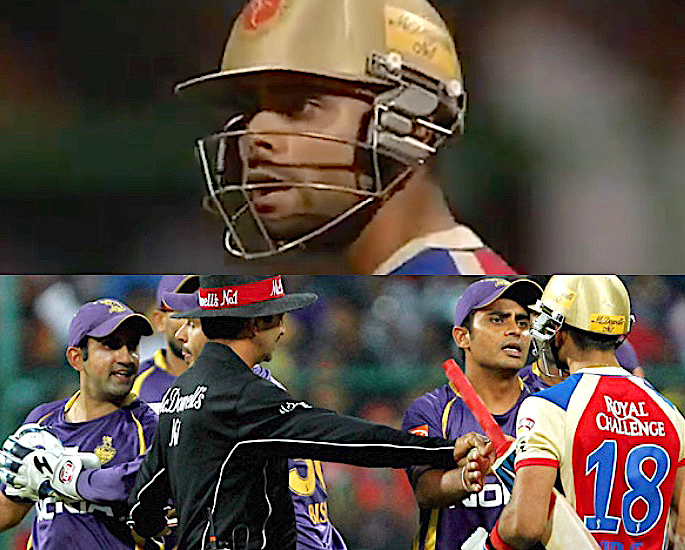 Virat Kohli had a hostile episode during the 12th T20 match of the 2013 Indian Premier League (IPL).

The day-night game in question was held at the M Chinnaswamy Stadium, Bengaluru on April 11, 2013.

Virat was wildly out on Balaji’s first delivery of the 10th over. Whilst Gautam and the KKR players began to celebrate the dismissal, Virat did not head for the pavilion.

Rather, Virat went walking to short extra cover, saying something to the bowler. Gambhir then angrily came towards Virat to defend his bowler.

Soon, it became a shouting match between the two, with batsman Rajat Bhatia from KKR intervening.

Eventually, Gautam and Virat came to their senses, with calmness coming into effect. The two were also quick to shrug off the incident. Gautam said intensity had a hand in things turning unpleasant:

Whereas Kohli also did not give many hoots, saying:

“What’s done on the field is done.”

Virat and Gautam were fellow players for Team India and their state side Delhi and North Zone. 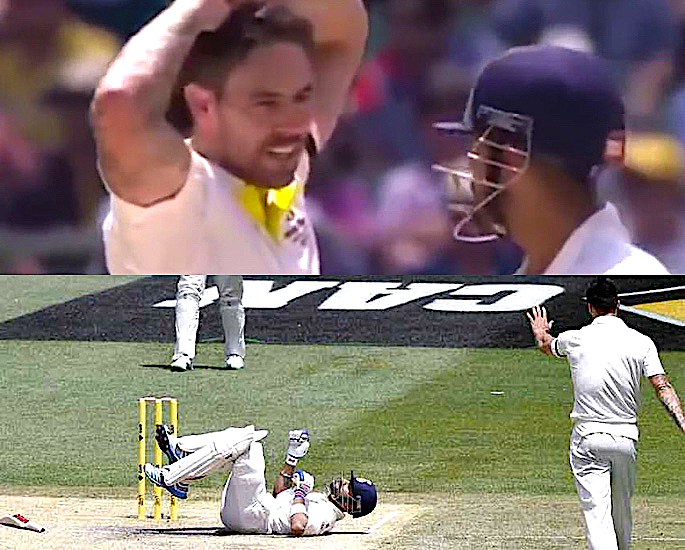 An angry Virat Kohli had a war of words with Australian left-arm fast bowler Mitchell Johnson in the third Test during the India tour down under.

Melbourne Cricket ground was the venue for this head to head between the batsman and bowler.

It all began during the 83rd over when Mitchell had a throw at the stumps, which hit Virat. This is when Virat came moving out of his crease, following a push down the pitch.

Mitchell came to check if Virat was ok, along with apologising.

But when Virat had a fluky edge to the boundary in the slip-gully area on the final ball, his emotions got the better off him. It seems he had a score to settle.

“Kohli has had a little word that goes back to the throw that hit him at the start of the over.”

Former Australian leg-spin legend and commentator, Shane Warne went onto acknowledging this was the case:

“Yep 100%, as soon as that ball was clear and not going to a fielder, he was straight up to Mitchell Johnson. And stood there and had a word.”

The umpires had to come and cool off things eventually. Kohli was quick to attack Johnson during a LIVE press conference, expressing:

“If someone doesn’t respect me, I have no reason to respect him.”

At the time of the incident, Virat was on 88, but he made 169. However, the match was drawn, with the Baggy Greens leading the four-match Test series 2-0. 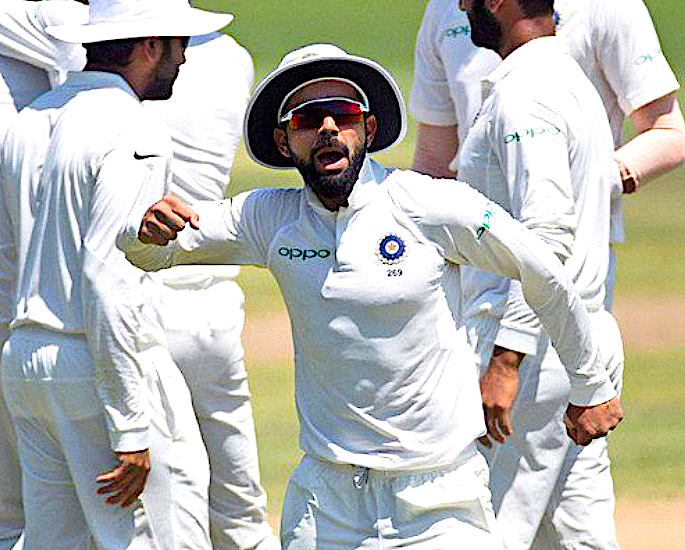 Virat Kohli was fined 25 per cent of his match fee in the second Test between India and South Africa.

During the second innings of the home side, Kohli became upset about the ball’s condition with it getting wet.

After consultation with on-field umpire Michael Gough (ENG), Kohli took to aggression, throwing the ball down.

“India captain Virat Kohli has been fined 25 per cent of his match fee and received one demerit point for breaching Level 1 of the ICC Code of Conduct during the third day’s play in the second Test against South Africa at Centurion on Monday.

“Kohli was found to have breached Article 2.1.1 of the ICC Code of Conduct for Players and Player Support Personnel, which relates to “conduct that is contrary to the spirit of the game.”

“After the day’s play, Kohli pleaded guilty to the offence and accepted the sanction proposed by Chris Broad of the Emirates Elite Panel of ICC Match Referees and, as such, there was no need for a formal hearing.”

Virat did not have good memories of this Test, as India lost it by 135 runs. 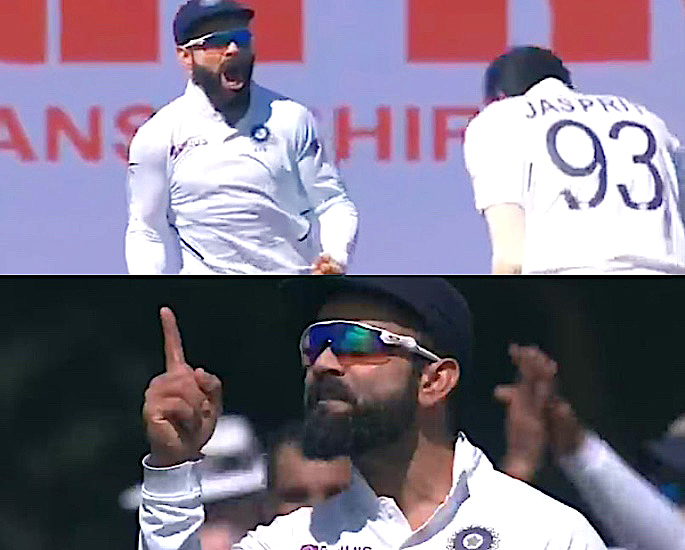 The incident took place during the Kiwis first innings of the second Test at Hagley Oval, Christchurch on the India tour of New Zealand.

The Indian captain allegedly swore at the Kiwi skipper (3) after being caught behind by wicketkeeper Rishabh Pant (IND) off Jasprit Bumrah (IND).

“He’s a very passionate guy… and very energetic in the field. He tries to bring out the best in himself.”

However, Virat was not happy when a local journalist questioned the Indian skipper about the incident:

“You need to find out an answer and come up with a better question. You can’t come here with half questions and half details of what happened.

“Also if you want to create controversy, this is not the right place. I spoke with the match referee (Madugalle) and he had no issues with what happened.”

This was not all. Earlier, Kohli raised his finger towards the crowd in silent mode after a Mohammed Shami (IND) inswinger crashed the stumps of Tom Latham (52).

Reportedly, Kohli was appearing to utter the words:

New Zealand had the final laugh with a seven wickets win and a 2-0 Test series triumph. 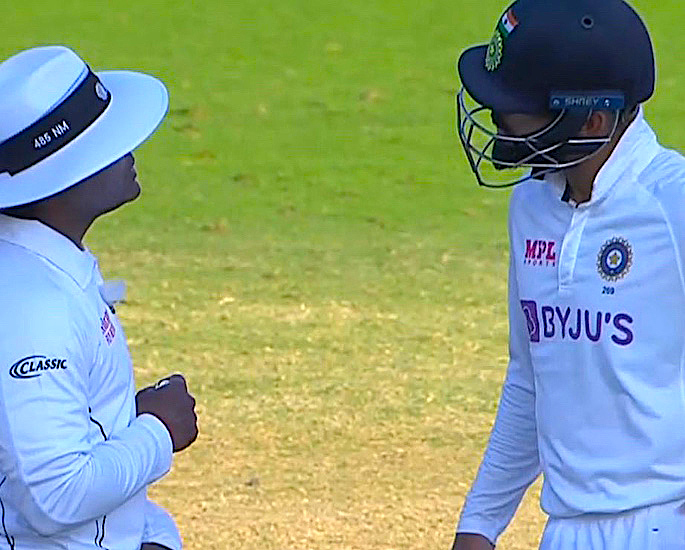 Virat Kohl had a furious altercation with fellow countryman and umpire Nitin Menon in the second test during the England tour of India.

The exchange, which took place on the third evening was amongst the angriest outbursts of Virat Kohli.

Things began escalating when a Virat Kohli review for Joe Root (ENG) went in the opposing captain’s favour, courtesy of the umpire’s call.

The TV replays were showing that the ball from left-arm spinner Axar Patel (IND) was an umpire’s call at the point of impact.

Therefore, it was right for TV umpire Anil Chaudhry and Nitin to stick with the original decision. But once the decision stood, Virat did not stop, having a fuming argument with the umpire.

“He cannot be speaking to umpires like that and inciting the crowd. He should be setting a much better example.”

Former England player and broadcaster Nasser Hussain was quick to have a dig at Virat, with good technical points:

“It was odd that the India team and their captain took the full 15 seconds to work out whether to review or not.

“They weren’t actually sure what they were reviewing for.”

“That tends to suggest there was a bit of doubt in their minds and yet Kohli seemed agitated by an umpire who had a milli-second to make that decision.

“If they were so certain that it was out and should have been given straight away, why did it take them so long?

“Kohli pushes the line with umpires and officials.

“Joe Root went up and asked in a very smiley sort of way about a review earlier in the game, but Kohli is a lot more animated when he speaks to them — which doesn’t look good.”

Point taken, that Virat was not happy with the decision, but he did push the limits. That is not the spirit of the game.

India was always on top of the game and this decision was not really going to affect the overall outcome.

Whilst India won the Test match to level the series 1-1, it was surprising that Virat did not face any action.

It will be interesting to see if the angry Virat Kohli tag stays with him. Despite being like this since his early cricket days, he has on many occasions shown maturity. This is quite a contrast.

Nevertheless, many people admire Virat Kohli as a world-class batsman, but he needs to show consistency by calming down in the long run.