Which Father & Son Took the Field as Cricket Umpire & Player?

Cricketers and umpires are central to the gentleman’s game. We revisit a father and son who took the field as cricket umpire and player.

It was in 2001 that a father-son pair were first involved in an international game as a cricket umpire and player.

Subhash Modi is a former international cricket umpire. He was born Subhash Ranchodass Modi in Zanzibar, Tanzania on March 30, 1946.

His umpiring career spans over fourty years. He had the honour of officiating twenty-two official ODI’s and nine T20 cricket matches.

He was also a reserve and fourth umpire during the 1999 Cricket World Cup which took place in the UK and Netherlands. 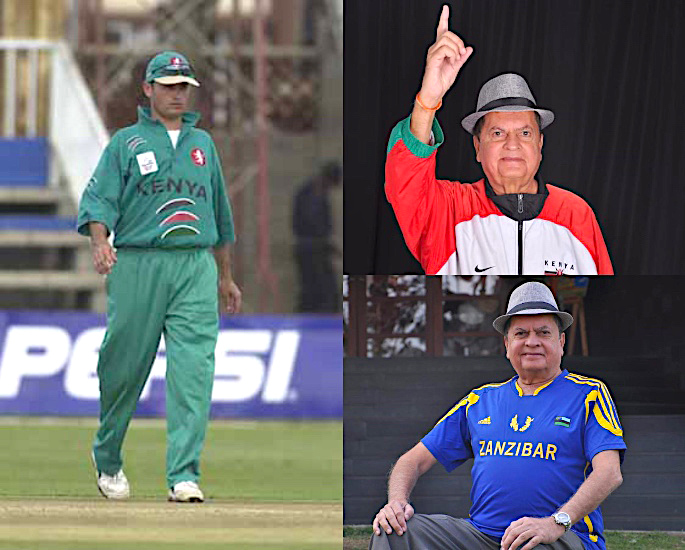 Hitesh Modi is a former Kenyan left-handed middle-order batsman. He was born Hitesh Subhash Modi in Kisumu, Kenya on October 13, 1971.

Of Indian Gujarati origin, he had his education in Rajkumar College, Rajkot, India. He played in three ICC Cricket World Cup matches, including 1996, 1999 and 2003.

He was the vice-captain of the national team when Kenya made the semi-finals of the 2003 Cricket World Cup in South Africa.

Hitesh made a gutsy twenty-six and executed a remarkable run out of Keith Arthurton (0) in the famous victory over the West Indies at the 1996 Cricket World Cup.

When the two featured together, Subhash gave Hitesh out twice from three matches.

We look back at when the father and son came together in three matches as cricket umpire and player. 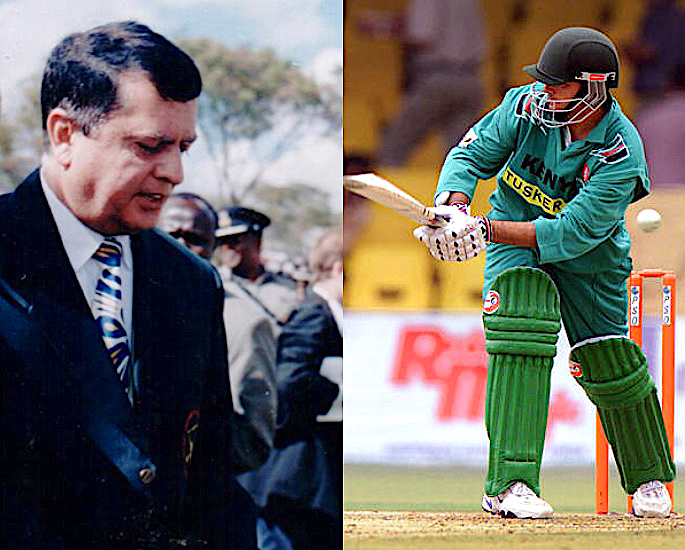 Subhash Modi and Hitesh Modi made history as they were the first father and son to feature in the same international game as cricket umpire and player.

This was an unusual and unique cricket record for the father-son pair who took the field.

The match they came together for was against the West Indies in the 1st ODI of the series on August 15, 2001.

The game took place at the Simba Union/Sikh Union Ground in Nairobi, Kenya.

With this game, Subhash Modi also became the first Kenyan umpire to officiate the 1st official ODI match in Kenya.

Besides, Subhash Modi, the other on-field umpire was Dave Orchard (RSA). The ICC Match Referee was Mr Gundappa Vishwanath (IND).

Subhash was not phased about umpiring in a match, featuring Hitesh:

“It did not bother me because my son and I had also featured in many more matches in the past.”

With Hitesh knowing that his father is impartial, he had similar sentiments:

“I think my dad has always been fair. He’s a fair man. So, to be honest, I did not worry about him umpiring the match.

“It was just like a normal game for me to be honest. There was no pressure and it was just nice to see him umpiring in that match, that’s it?”

In reply to a question about whether the two talked before the match, Hitesh added:

“It was just a normal conversation and he was wishing me good luck.”

Hitesh also mentions he got to the ground before his dad, as he began preparing and warming up with the team.

Hitesh was out caught by Chris Gayle off Colin Stuart, making 4 from twenty-eight balls. Was he nervous batting in front of his dad? Dismissing, any nervousness Hitesh points out:

“The West Indies were attacking us. Wickets were down. Hence, consolidation was needed.”

Subhash reveals post-match, an official also went on to congratulate him, saying:

“The Match Referee congratulated me after the match for the unique cricket record.

“This is because the world had witnessed similarity of father and son featuring together in the same international arena as an umpire and player.”

The match against the West Indies was certainly a proud moment for the father and son. 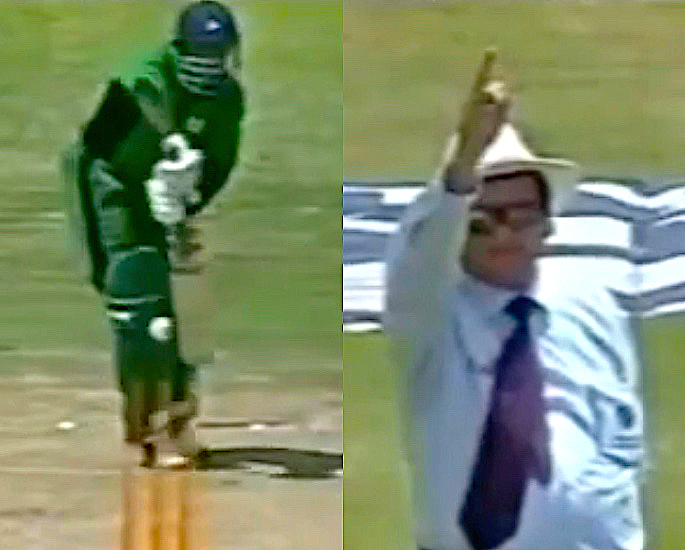 Subhash Modi and Hitesh Modi came together for a further two matches as cricket umpire and player. This was during the Bangladesh ODI tour of Kenya from August 12-13, 2006.

The games became prominent, with Subhash ruling Hitesh out in both matches. The matches in question were held at Nairobi Gymkhana Club.

The first game that Subhash gave Hitesh out was in the 1st ODI between Kenya and Bangladesh. This took place on August 12, 2006.

Krishna Hariharan (IND) was the other on-field umpire, with Roshan Mahanama (SL) being the ICC Match Referee.

Bangladesh wicket-keeper/captain Khaled Mashud took a catch (bat and pad) behind the stumps to dismiss Hitesh.

Remembering this key moment between father and son, Subhash says:

“I heard the sound of the wood and I did not have any doubts in my mind. That’s why my index finger went up. And he was declared out caught.”

Hitesh made a dogged twenty-two before heading back to the pavilion.

Hariharan and Mahanama were once again officiating, along-side Subhash in their respective roles.

Hitesh (1) was adjudged lbw by Subhash Modi, following a delivery from Mashrafe Mortaza. The father instantly nodded his head and raised the finger.

Subhash was convinced that his son had to go as he recalls:

“I was hundred per cent sure that my son was out plumb lbw.

“Most of our decisions come from our heart. And the mind decides what to do. My decision was right.”

Hitesh was hoping for the benefit of the doubt, but looking back at the replays, he knew his father had made the correct call:

“I had to wait for him to give me out because obviously, I did not play the ball. I was hoping he was going to say, ‘not out’. But you know, to be honest, when I looked back and watched it, I was plumb.

“Without any hesitation, my dad was confident with his decision.”

This dismissal also then became a distinctive cricketing record. It is the only instance to date when a father declared his son out lbw in an official international cricket match.

The two did not have anything to say after the match, Hitesh tells us:

“We basically sat down at dinner and said we’re not going to talk about the match.”

Though, Hitesh says his mum who had been supportive to husband and son was a little surprised with the silence:

“My mom said that you guys are not talking about the match. She was not supporting either. She always wanted both of us to do well.” 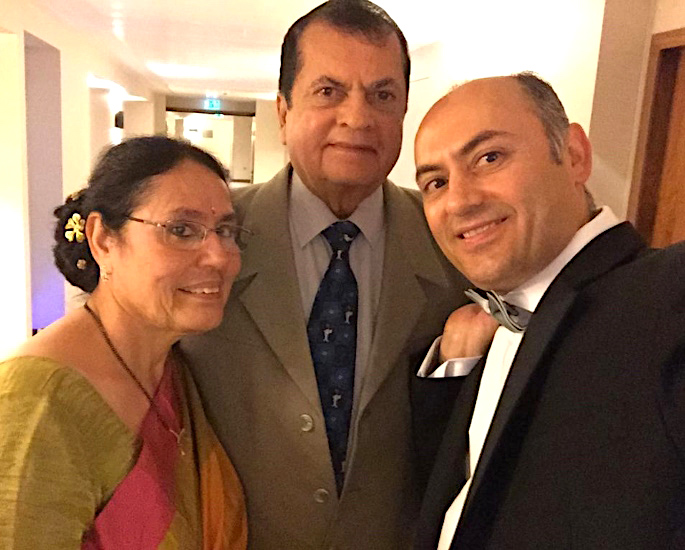 The second ODI against Bangladesh was actually the last international 50 over the game for Hitesh.

He is happily married and lives with his wife and two daughters in the UK. He also runs a successful business in London, UK.

Subhash’s final international game as an umpire was between Kenya and Afghanistan at Nairobi Gymkhana Club on October 11, 2010.

Subhash retires as a cricket umpire on his 75th birthday. Subhash could not back his emotions as he told us:

“It was very difficult for me to make an emotional decision of my retiring from cricket umpiring. This is after having been umpiring for over just fourty years.

“I have enjoyed every moment of my umpiring carer. And my long journey of umpiring has been enjoyable and challenging.

“Besides the enjoyment, I must say there was also never a dull moment.”

The father and son have been involved in the sport, with sincerity and dignity. They are also an inspiration for many East African Asians in Kenya.

Hopefully, many more East African Asians will go on to represent Kenya as cricket umpires and players.