Pakistani Couple took their Baby Son to their Walima

A Pakistani couple from Hafizabad have gone viral after they took their baby son to their Walima ceremony.

"I realised the picture had gone viral."

A Pakistani couple went viral after they took their baby son to their Walima ceremony.

The Walima, or marriage banquet, is the second of two parts of a traditional wedding.

Rayan Sheikh and Anmol actually got married in 2020, however, due to the pandemic, their Walima was postponed.

After restrictions were eased, they decided to hold the long-overdue reception.

Their Walima was originally meant to be held on March 14, 2020, but a surge in Covid-19 cases prevented that from happening.

Rayan said: “It was a new development for us [the pandemic and the subsequent lockdown] and we expected it to subside within a few days.

“However, the lockdown was imposed throughout Pakistan, as you very well know, and was extended beyond Ramazan to even Eid.”

His relatives from abroad were set to attend the Walima but when the lockdown was imposed, his family decided to hold the event at a later date “with proper planning”.

Although restrictions were eased in September 2020, Anmol was pregnant with their child and was in no condition to be part of a ceremony.

Rayan continued: “We then decided to hold the Walima after the baby’s delivery.”

Things were made easier due to his family owning a wedding hall.

Rayan said that it was a national holiday that day and he knew his family did not have other commitments.

“We decided to hold it on that day as it was a national holiday and the entire family was free.”

Initially, the couple wanted their child to be looked after by the grandparents on the day, but when he started crying, Anmol decided to hold him during the Walima. 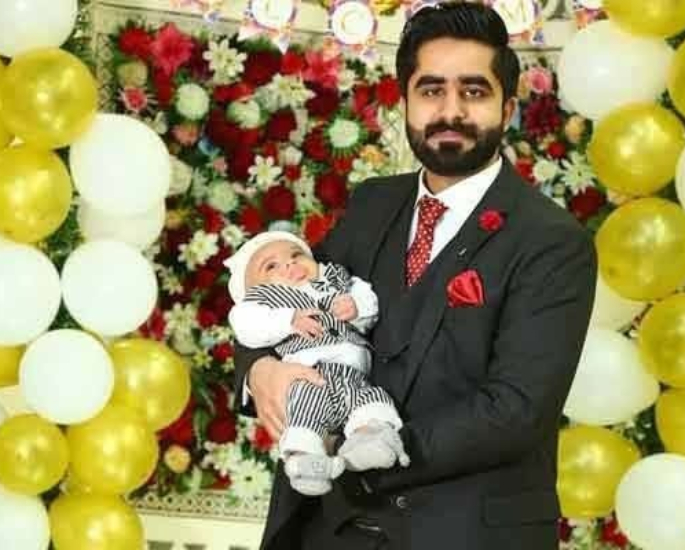 During the event, Rayan held his child and one guest took a photo. The picture was uploaded on social media and it went viral.

Rayan said: “The function hadn’t even ended when I realised the picture had gone viral.”

The day after the ceremony, he saw that the picture had gone viral on Facebook and Instagram.

“I was a bit sceptical at first about people making fun of me because of my son’s presence at the Walima, but in the end, we decided to invite close friends and family members only due to the prevalent coronavirus situation.”

He said that the response was “positive” and that his family enjoyed the event.

“If my family is happy, then, for me, nothing else matters. I didn’t care what or how people would react or what they would say.”

Anmol said that going viral was a good experience.

Rayan revealed that his parents were adamant about a Walima ceremony despite the frequent delays.

He added: “My family was adamant on it [the Walima ceremony].

“They said this function was pending. Our dresses and arrangements were all ready too so it wasn’t that big a deal.”

As a result, the family were able to celebrate the Pakistani couple’s marriage and at the same, host an event for the baby.

Rayan also provided advice for couples facing a similar problem during the pandemic.

He said: “Do what works best for you. Critics will keep on saying whatever they want to say. We have to do what our heart desires.”

Dhiren is a journalism graduate with a passion for gaming, watching films and sports. He also enjoys cooking from time to time. His motto is to “Live life one day at a time.”
Indian Wife in Love with Servant kills Husband
6-year-old Boy finds Millions of Years Old Fossil in Garden