he is actually the highest-paid Bollywood actor

There is a new person at the top of the Forbes India 2019 Celebrity 100 List and his name his Virat Kohli.

The Indian cricket captain was at number two in 2018 but has soared to the top of the list, knocking off Salman Khan, who has dropped to number three.

Bollywood stars have dominated the Forbes list. However, Virat is at the number one position due to his prolific scoring spree and several endorsements.

For the first time in eight years since the launch of the Forbes India Celebrity 100 List, Kohli has replaced actors at the top.

This was through match fees, the BCCI central contract, brand endorsements and an eight-figure fee for every sponsored Instagram post.

Bollywood star Akshay Kumar has climbed up to the number two spot due to his huge earnings over the year.

Not only has his earnings taken him to the second position of the list but he is actually the highest-paid Bollywood actor of the year.

He actually made more money over the year than the likes of Hollywood star Bradley Cooper and singer Rihanna.

Virat Kohli knocked off Salman Khan, who has been at the top since 2016. Although his film Bharat was a hit, it was his only release, which contributed to his fall to number three.

The year 2019 also marks the year that two women are part of the top 10. Deepika Padukone and Alia Bhatt are at the respective positions of 10 and 8. 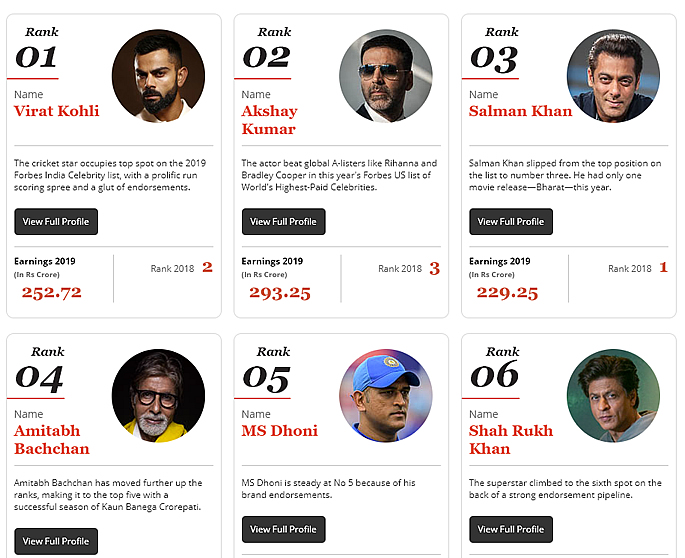 Brand endorsements and their leading roles have seen several actresses making their Celebrity 100 debut. The likes of Sara Ali Khan, Kriti Sanon and Disha Patani are on the list for the first time.

Shahrukh Khan may have earned 27% less than 2018 and had only one release with ZERO, but climbed back into the top 10 and sits at the number six position.

Cricket icon Sachin Tendulkar is the only person to have featured in the top 10 every year even though he retired in 2013.

Other movers in the list include Priyanka Chopra who saw a massive jump up from 49 in 2018 to 14. This is due to her strong social media presence as well as her comeback in Bollywood.

Hrithik Roshan also moved up the rankings thanks to the success of his biopic film Super 30.

With massive increases in the rankings come decreases.

This includes Aamir Khan who fell out of the top 10 to number 15 after Thugs of Hindostan failed to impress.

Ranbir Kapoor also had a massive decline after he had no releases in 2019.

Ayushmann Khurrana, Neha Kakkar and Kapil Sharma either made their Celebrity 100 debut or return to the list due to successes in their respective fields.

It is not just box-office sales, which are having an effect on the earnings of celebrities.

The impact of alternative platforms like Netflix and Amazon Prime has seen a rise in earnings of several actors.

As a result, the fortunes of Kalki Koechlin (Made in Heaven) and Saif Ali Khan (Sacred Games) gained substantially.

Celebrity chefs such as Ranveer Brar and Vikas Khanna feature on the list after a celebrity chefs category was introduced in the Forbes Celebrity 100.

While there are names from different areas on the list, Virat Kohli leads the line for 2019.

Dhiren is a journalism graduate with a passion for gaming, watching films and sports. He also enjoys cooking from time to time. His motto is to “Live life one day at a time.”
Can Ex-Google Exec Tania Aidrus build a ‘Digital Pakistan’?
YouTuber Ryan Kaji aged 8 earns $26 million in 2019