Bharat: Salman Khan thanks Fans for his Highest Opener

Through a social media message, Bollywood actor Salman Khan thanked fans for supporting the film ‘Bharat,’ which became the highest opener of his career.

"There could be no bigger respect for our country than this"

Bollywood heartthrob Salman Khan has gone on social media to thank his many fans for the success of Bharat (2019).

The much-awaited patriotic film, which hit the theatres on June 5, 2019, has become the highest opening film ever for Salman Khan.

Releasing across 4700 screens in India, fans of Salman have certainly turned out in big numbers to support their favourite star.

Bharat has gone onto virtually double the figures of Kalank, indicating the big following Salman enjoys around the world

Salman went on Twiter to put out a special message for all his fans. He tweeted:

“Big thk u sabko fr giving sabse bada opening mere career ka par what made me the happiest & proudest is ki during a scene in my film jab national anthem is recited ev1 stood up as a mark of respect.

“There could be no bigger respect for our country than this… Jai Hind.”

Big thk u sabko fr giving sabse bada opening mere career ka par what made me the happiest & proudest is ki during a scene in my film jab national anthem is recited ev1 stood up as a mark of respect. There could be no bigger respect for our country than this… Jai Hind? #Bharat

As the official remake of the South Korean movie Ode To My Father (2014), Bharat will take audiences on a historical Indian journey about the life of an ordinary man.

Director Zafar also put out a statement, after receiving” positive feedback from the audience. He said

“It is humbling to be showered this kind of love by audiences. I have tried to present Salman Khan in a totally new light and as a totally new hero with ‘Bharat’.

“I’m ecstatic that audiences have liked our attempt to make Bharat a thoroughly entertaining joyride that also has its soul in the right place.”

The film has done extremely well considering that it was clashing with India’s opening match against South Africa at the 2019 Cricket World Cup. 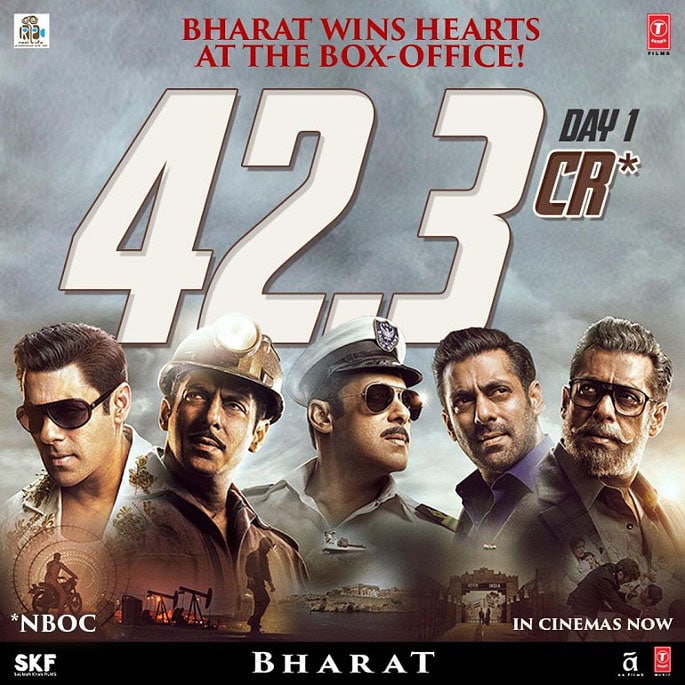 Despite Race 3 doing well at the box office during the opening weekend, fans and trade analysts were quite critical of the film.

But with Bharat, Salman races back to the top. Critics are appreciating Bharat, which has a duration of 155 minutes.

Ananya Bhattacharya, a critic from India Today described Salman’s performance as perfect. She gave the film 3 stars out of 5, and shared her thoughts, writing:

“Through the eyes of Bharat, we see the journey of Bharat, our country, through some of its best and worst phases. Director Ali Abbas Zafar manages to capture in 2 hours and 47 minutes the ups and downs that this man and his country wade across.

“The best part of Bharat the film is that it has something for everyone.”

“It is the quintessential Big Salman Khan Film with all its trappings.Romance, comedy (and a lot of it, thanks to Sunil Grover), drama, action, emotion.” 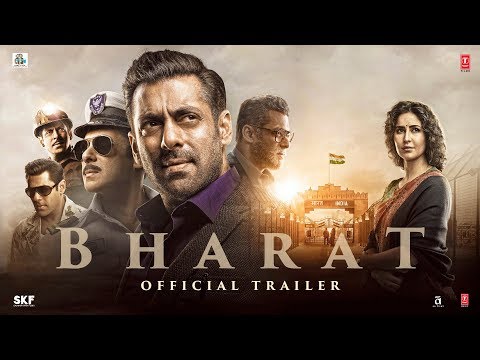 Salman will be enjoying the success of Bharat with the producers of the film, which include his sister Alvira Khan Agnihotri and brother-in-law Atul Agnihotri.

The next film of Salman Khan will be Dabangg 3, which will release on December 20, 2019.

Faisal has creative experience in the fusion of media and communication and research which increase awareness of global issues in post-conflict, emerging and democratic societies. His life motto is: "persevere, for success is near..."
Salman Khan slapping Security Guard Video goes Viral
Kareena reveals if Taimur is making Bollywood Debut